Two Days in Philadelphia for $200 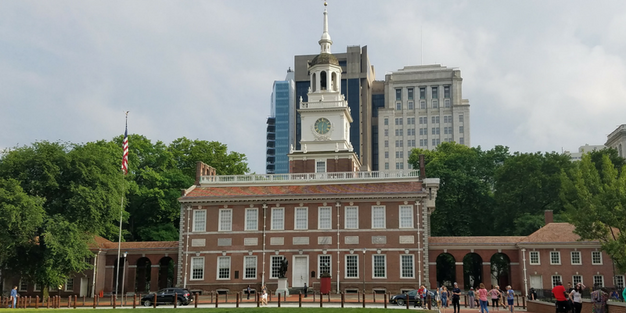 Philadelphia is a historical, artistic, athletic, and pop-cultural representation of the United States of America. It is a cosmopolitan city that offers so many things you could take multiple trips here and not see the same things twice! Here is one variation: a two-day vacation in the city for $200!

Philadelphia is perhaps most world renowned for the history that is represented here – most notably the signing of the Declaration of Independence and the writing of the U.S. Constitution, both of which occurred at Independence Hall (above).

It is also home to the oldest continuously inhabited street in America, Elfreth’s Alley. (For more beautiful photos and a write-up of the history of Elfreth’s Alley, check out this post by my colleague, Enchanted Serendipity!)

Plus, see the home of Betsy Ross, throw a penny on Benjamin Franklin’s grave (remember, his motto was: A penny saved is a penny earned!), and visit the first U.S. Post Office. There’s also the First and Second Banks of the United States (established under Alexander Hamilton!) and of course, the Liberty Bell, possibly the preeminent international symbol of freedom. While there are entrance fees, or at least timed tickets for entry to some places, you can walk all around the Old City District and experience many of these things for free. 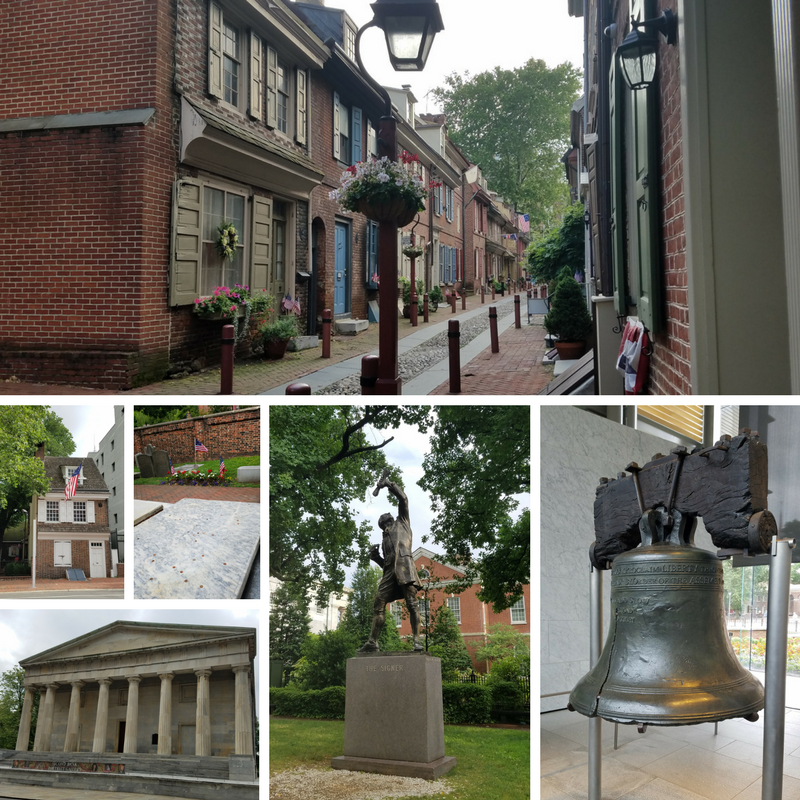 A walk thru Chinatown will get you a view of the Friendship Gate and some of the best dumplings ever. (I must admit, we were so focused on eating the dumplings that we didn’t take any pictures!) 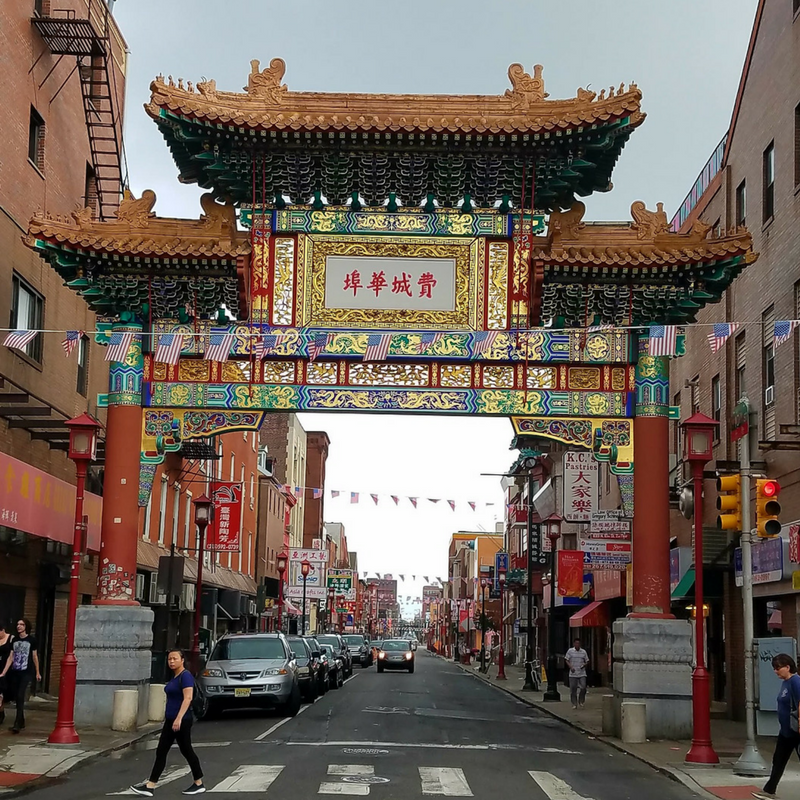 While we were visiting, the Chinese Lantern Festival was happening in Franklin Square (May-June 2017). For $17, you could get a timed ticket on Friday and Saturday evenings and walk amongst these elaborate and iconic lanterns lit up against the dark night. However, during the daytime, you can walk thru the park for FREE and avoid the crowds! While not as dramatic as when they are lit at night, they are still very enjoyable to look at.
Cost: FREE (daytime) / $17 (evening) 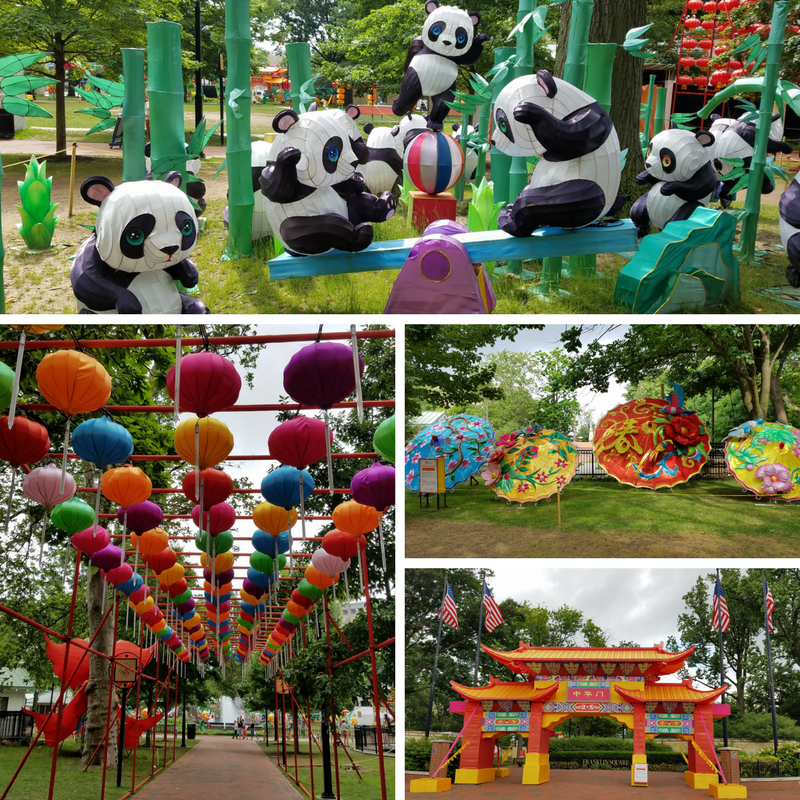 If you’re not a history buff and sports are more your thing than take a run up the Rocky Steps at the Philadelphia Museum of Art. Made famous by Rocky movies, I guarantee you will start humming the theme song as you climb the 72 steps to the top. Definitely worth doing for the sake of American pop-culture, and for the gorgeous view of downtown Philadelphia you’ll see at the top. When you go back down, turn to the left and you’ll quickly find the Rocky Statue.
Cost: FREE 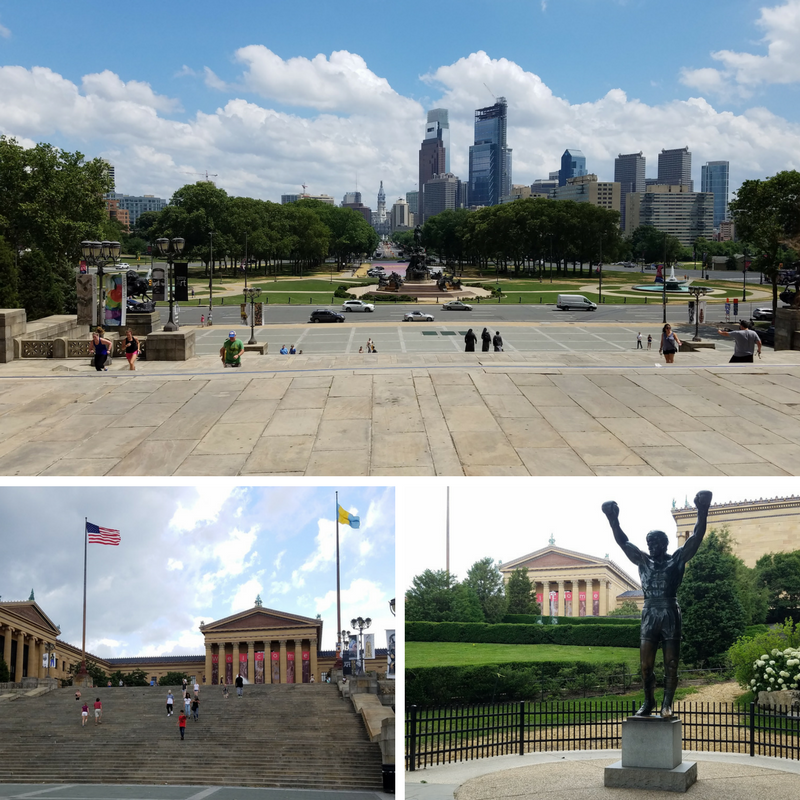 Street Art abounds in Philadelphia. I love finding street murals in every city I visit and I didn’t come close to scratching the surface of all the many beautiful murals that exist in Philadelphia! There’s also the mosaic work of Isaiah Sagar at his museum, Philadelphia’s Magic Gardens that has exploded into the surrounding neighborhood. While there’s a $10 fee for the Gardens, you can walk the streets around it and see many pieces of his work for free.
Cost: FREE (Streetart) / $10 (Philadelphia’s Magic Gardens) 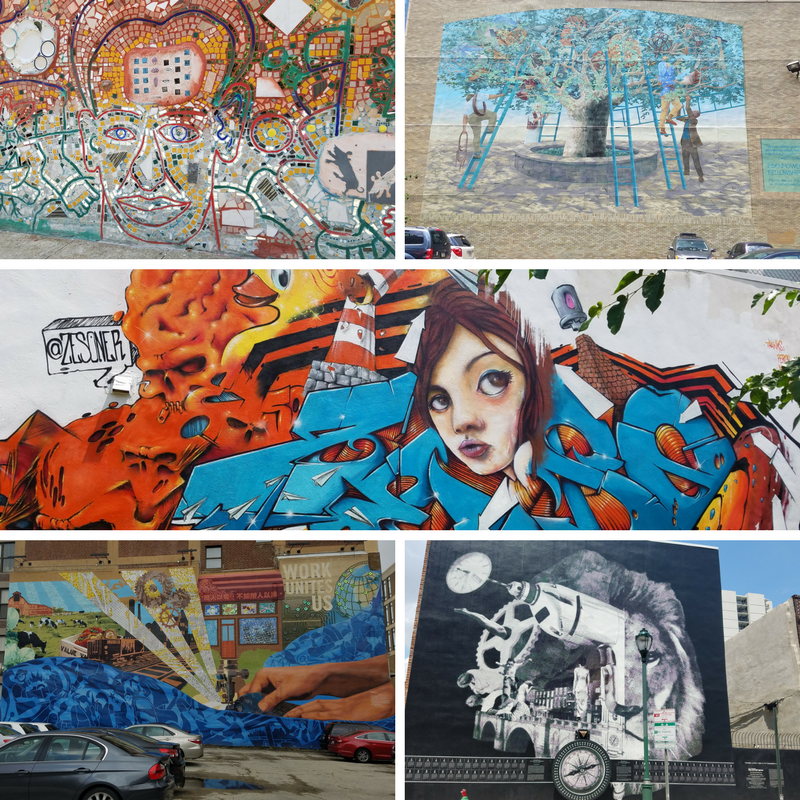 I’ve enjoyed tracking down the many renditions of Robert Indiana’s LOVE statues around the world, and while Philadelphia does have one, it was temporarily down for repairs while I was there. However, Robert Indiana also has an AMOR statue that was installed by the city to commemorate the Pope’s visit to Philadelphia in 2015.
Cost: FREE 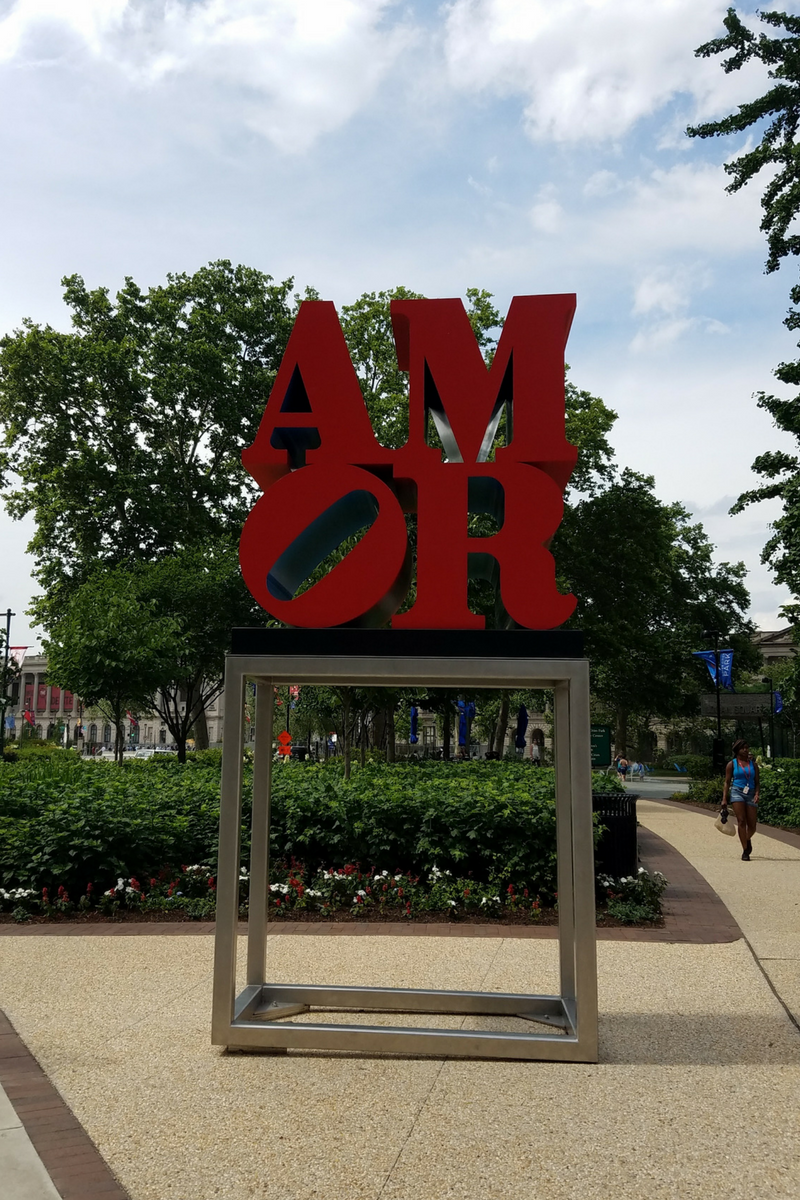 One of my favorite museums in Paris was the Rodin Museum. Turns out, Philadelphia also has a Rodin Museum and it contains the largest public collection of his work outside of Paris. The beautiful building and grounds house over 140 works of bronze, marble, and plasters by this elegant artist.
Cost: $10 (suggested donation) 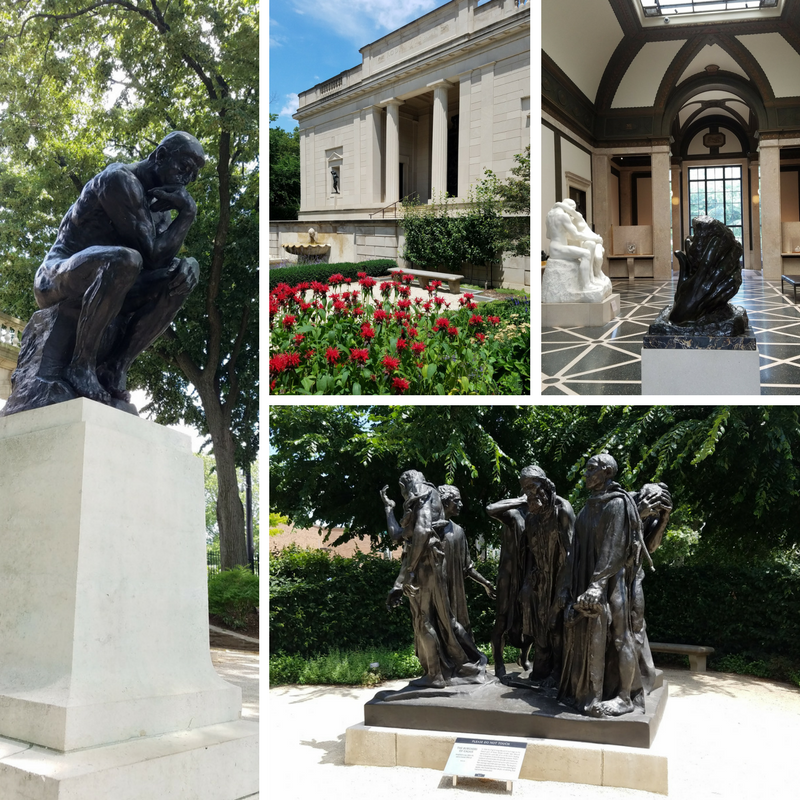 Public markets have been a part of Philadelphia’s history since the late 1600’s. Reading Terminal Market first opened for business in 1892 and is one of the most popular tourist attractions in Philadelphia, after the Liberty Bell and Independence Hall. Lots of good eats here! 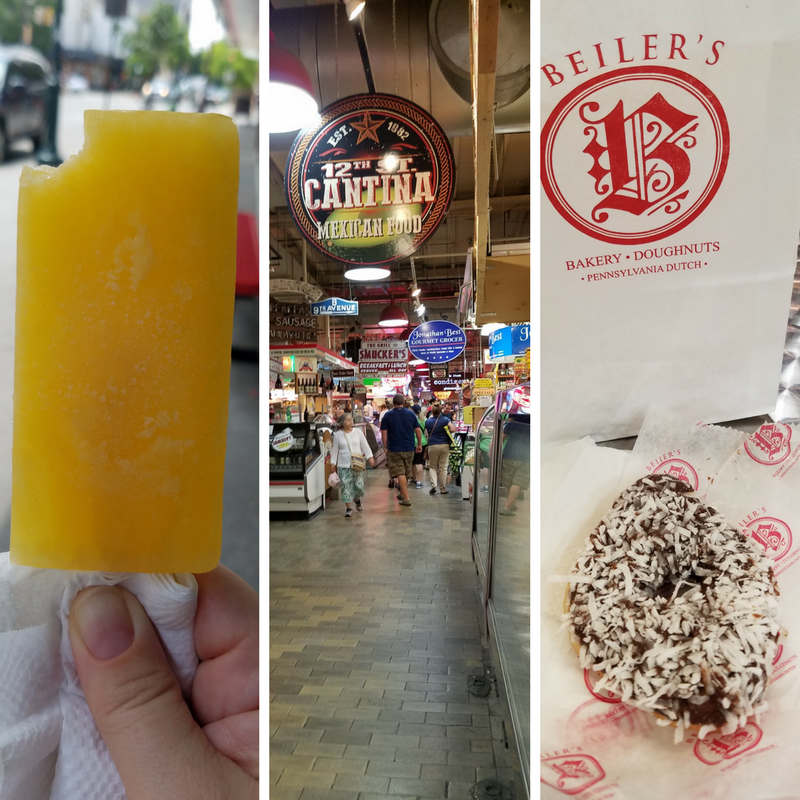 Here’s a look at my Philadelphia itinerary and a few of the many places I didn’t get a chance to visit: 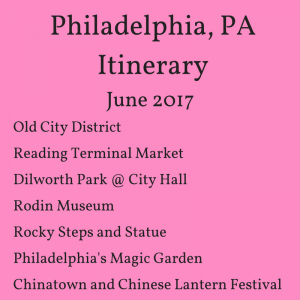 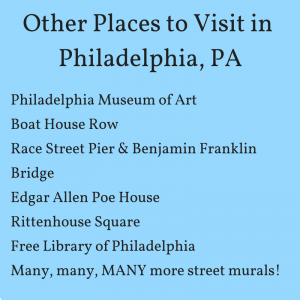 My budget for the trip came in at just over $200. I did use airline points for the trip there and shared a hotel room with a friend, but if you are on the east coast, it’s very easy to take a train or bus into Philadelphia and makes for an economical weekend getaway. 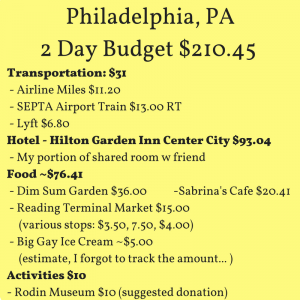 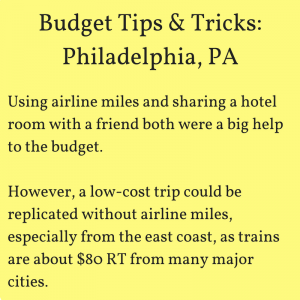 As always, if you liked what you read, please consider sharing it on social media! 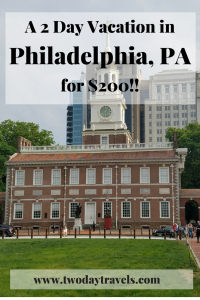