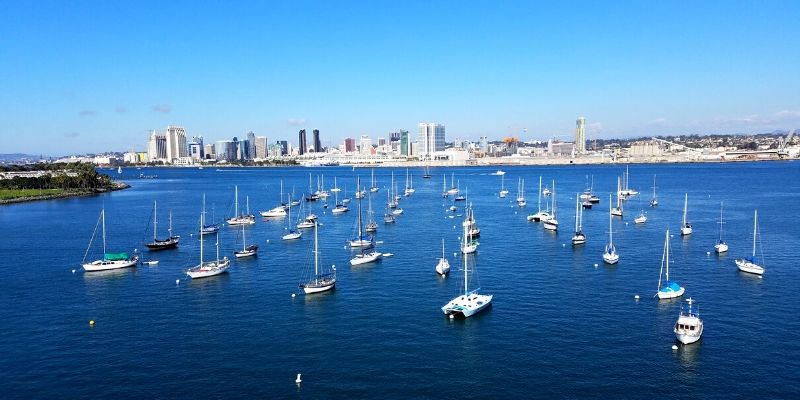 When I lived in Los Angeles, I would often drive down to San Diego to spend time exploring the city.  Known as the “Birthplace of California”, San Diego is the 8thlargest city in the US. There are so many things to do you could spend a lifetime here! Of course, your visit to the city will depend on what you like to do most. Although the weather is perfect almost everyday in Southern California, spring and fall are a great time to visit. The weather is warm and the crowds are small(er). So, if you’re looking for some ideas for your San Diego itinerary I’ve put together some of my favorite things to do to help you start planning your San Diego getaway!

DAY 1: The Drive Down

Depending on where you leave from Los Angeles, and what time of the day you leave, expect it to take about three hours to drive to San Diego. The most convenient route for most people will take you on the I-5 south. Although it starts inland, once you get south of Los Angeles and Orange County, you’ll notice you shift closer to the coast and the Pacific Ocean can be seen on your right-hand side and it makes for some beautiful views as you drive!

First stop – Brunch, a Pier, and Street Murals in Oceanside

Oceanside has one of the longest wooden piers on the West Coast – at 1,942 feet the pier includes a convenience store and a (chain) restaurant. Originally built in 1888, the bridge has been destroyed by storms and rebuilt five times; the current sixth bridge was built in 1987.  Enjoy a walk on the pier and watch the fishermen, the surfers, the waves, or if you’re there in the evening enjoy the sunset. 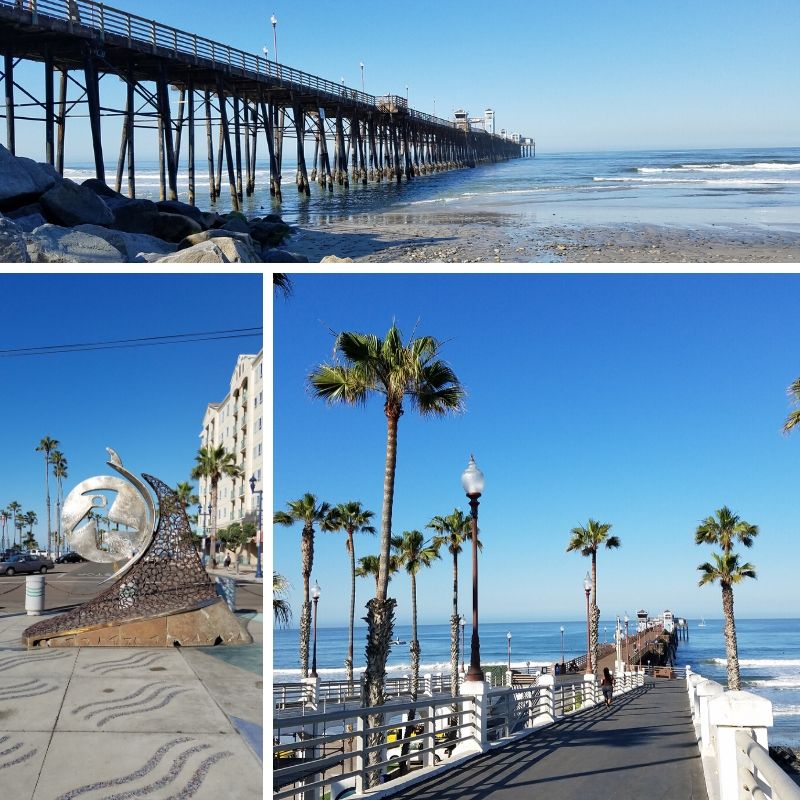 For a taste of something local, head down the road to Beach Break Café! It’s a family owned restaurant popular with the locals and has been around for over 30 years. Fun fact: it sits halfway between downtown Los Angeles and the California-Mexico border! (*According to their website.)

The waitress recommended their Corn Beef Hash & Eggs. It isn’t a dish I would order on my own but she said it was a specialty of theirs. I’m really glad I followed her suggestion, it was delicious!

While enjoying my brunch, I looked out the window and saw the mural on the sidewall of the building across the street. After paying my bill I went out to investigate and that started me on my street mural hunt. I quickly learned Oceanside is filled with street murals, many by hometown artists. One of the best collections of the murals in Oceanside, including a map of their locations can be found at the Visit Oceanside website.

The top mural, Eyes of Picasso by Mario Torero can be found in Artist Alley. The bottom, Postcards from Oceanside (2002) by Sue Pruett and Rhonda Ruggieri, is on the side of the Sunshine Brooks Theater. 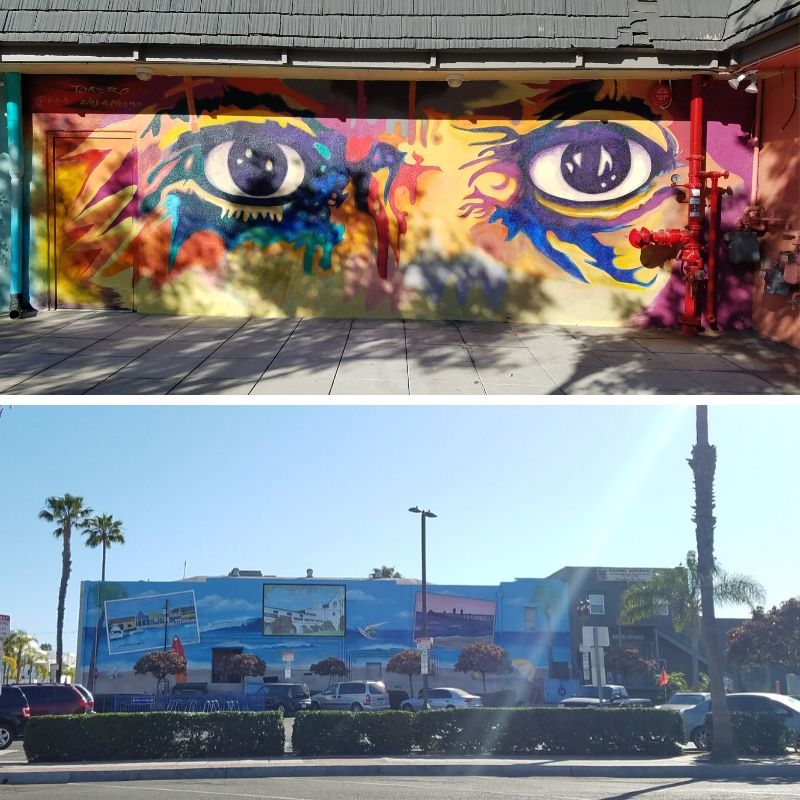 You can find the Flying Pig Mural by Oceanside native BB Bastidas on the side of The Flying Pig Restaurant and Bar (naturally). And below that, the mural by Kris Markovich (painter, cinematographer, skateboarder) located at Wrench & Rodent Seabasstropub is what first caught my eye while sitting at the Beach Break Café. 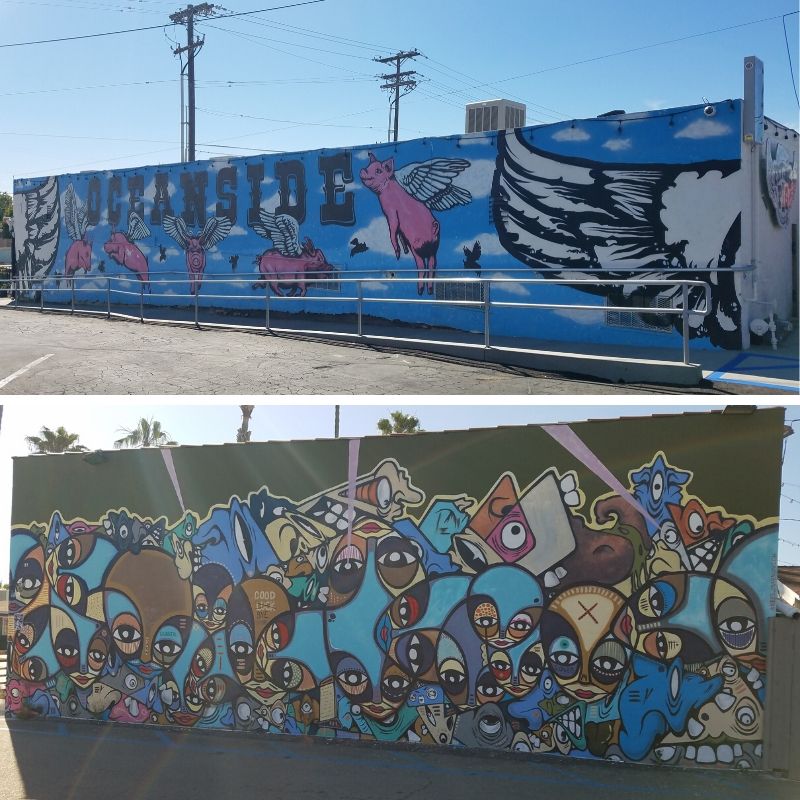 One of my favorite murals is by an Oceanside artist but is actually on a wall in Carlsbad: Catnap by Michael Summers. 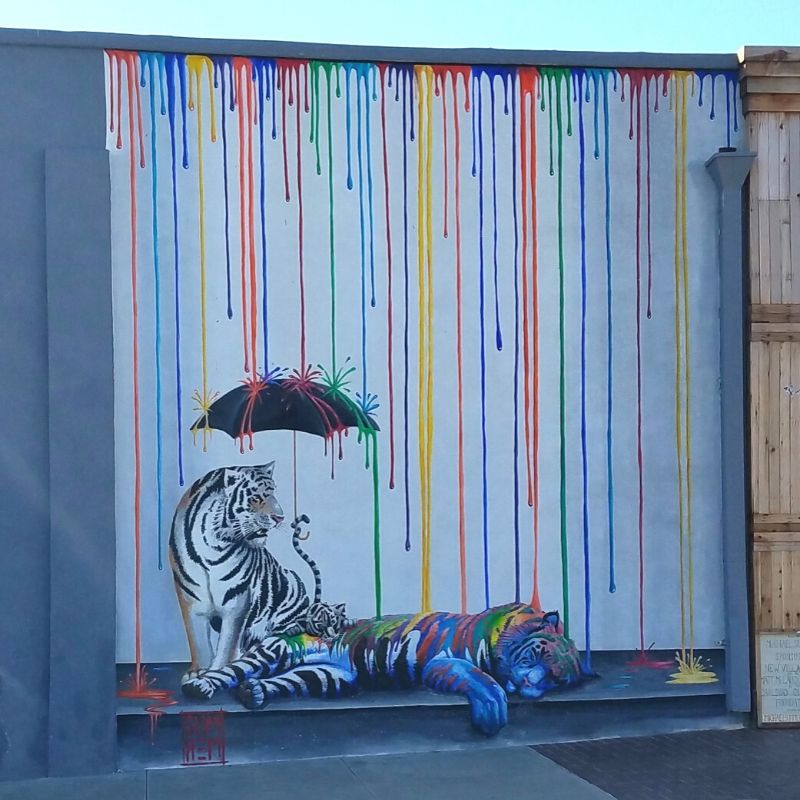 Stop and smell the flowers in Carlsbad!

While the drive to San Diego is pretty most of the year, if you’re lucky enough to drive down in the spring, be sure to stop and see the Flower Fields in Carlsbad!

There are around 50 acres of Giant Tecolote Ranunculus flowers planted in the hillsides overlooking the ocean that bloom from March until early May. Walk along the trails to admire the blooms, take a ride on the antique tractor wagon or get inspiration for your home garden with a visit to the Artist Gardens! Be sure to visit the Paul Ecke Jr. Barn to watch the film Legacy of Color to learn more about the history of The Flower Fields. 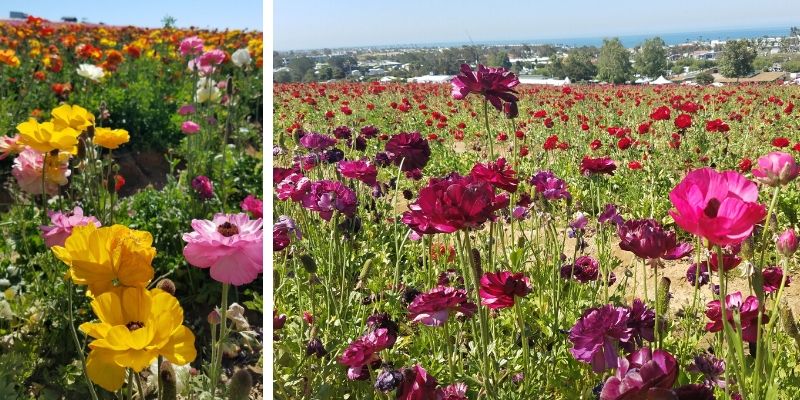 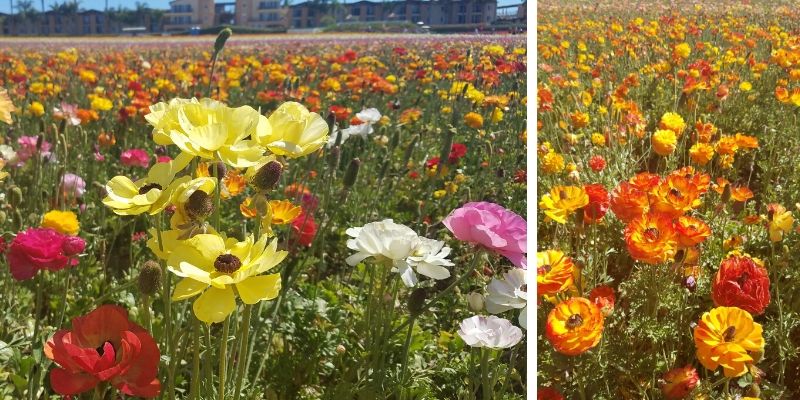 As you continue your way south, be sure to stop in La Jolla to see the harbor seals and sea lions. Along with some beautiful coastal views, you can watch the animals as they sun themselves on the beach. And at certain times of year (December-May), you might even see seal pups!

Although you can get quite close to and among them, they are wild creatures and I personally suggest giving them their space and viewing from the coastal path walkways above. 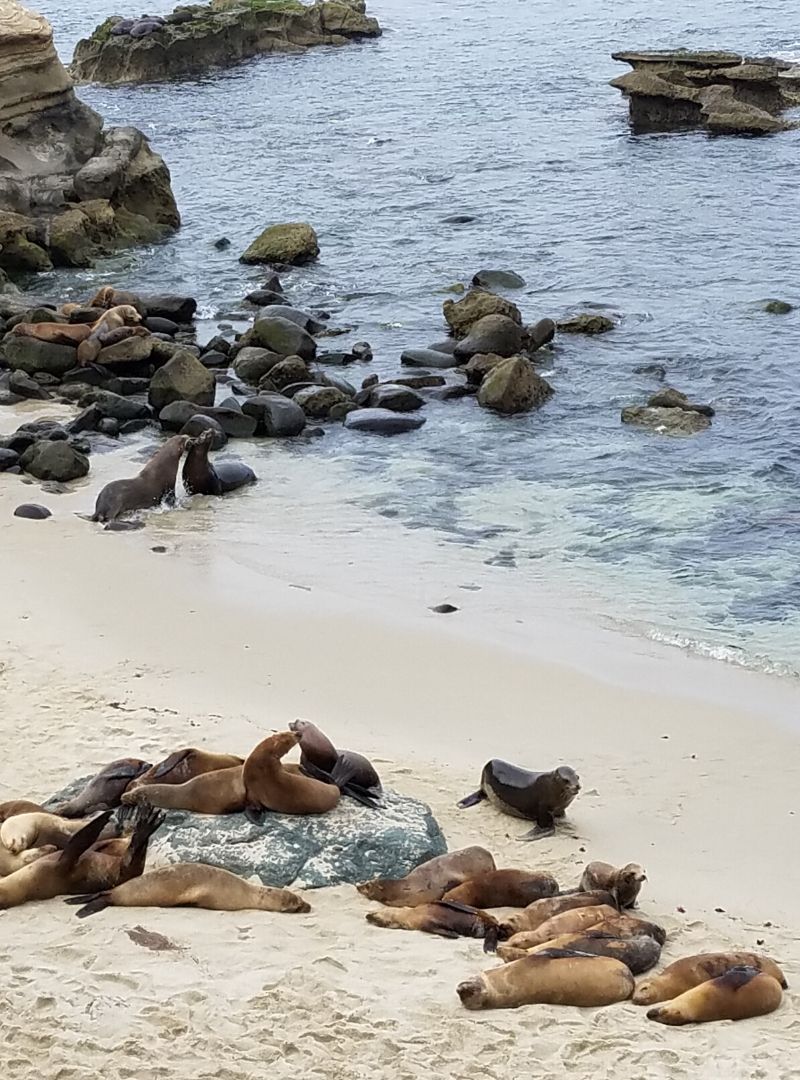 I find watching a ball game outside to be one of life’s pleasures and seeing a game in Petco Park Stadium in San Diego doesn’t disappoint. With beautiful views of the city beyond the field and almost every day guaranteed to be warm and sunny, it doesn’t get much better than this!

Game tickets start around $15 (and can go up considerably from there!), so pick your price point and enjoy America’s favorite pastime. **2020 Season pricing is out and tickets are starting at $16** 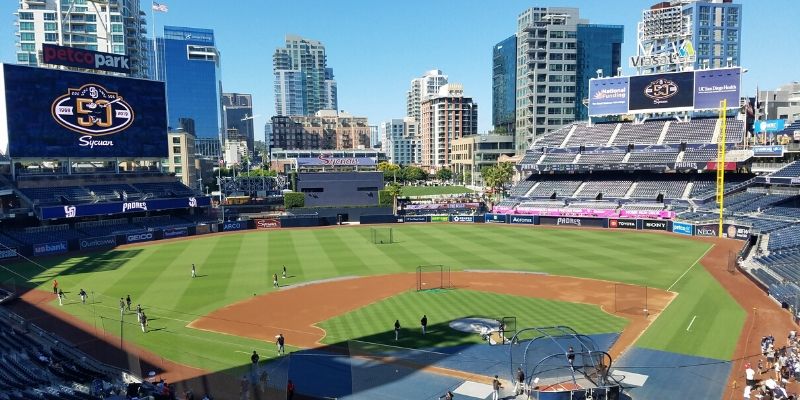 Petco Park has a fantastic selection of restaurants to choose from so save up for a little splurge when you go to the game. I personally recommend the Pulled Pork from San Diego’s favorite Phil’s BBQ or the Cardiff Tri-Tip Crack Nachos! Both. Are. Amazing.

Another fun thing to do is take a tour of the stadium! Tours happen daily and offer a behind-the-scenes look at the stadium, including the press box, private luxury suites, the dugouts and visitor’s clubhouse*, the historic Western Metal Supply Co. Building and the Breitbard Hall of Fame.

*If you have tickets to the game, you can do an Early Bird Game Day Tour, which is what I did, but to be honest, I was a little disappointed because this meant no access to the locker room or playing field. Although it was convenient to go right before the game and you do get into the stadium sooner, I would recommend taking the regular tour because (speaking from experience of other stadium tours I’ve done) it’s super cool to get a glimpse of the field from the dugout! 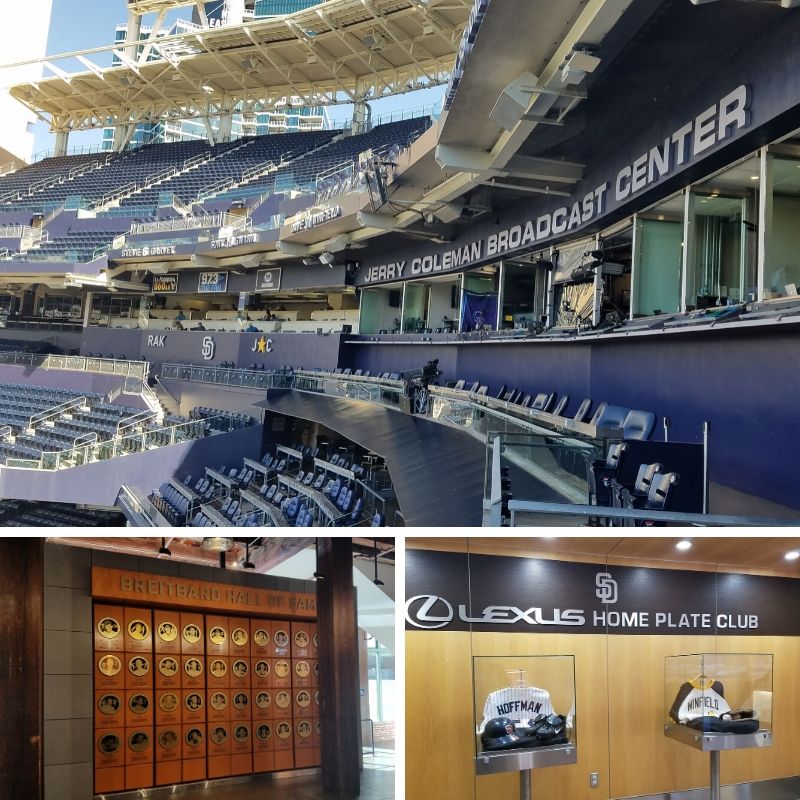 In keeping with the theme of family-owned restaurants, check out Perry’s Café for breakfast. This iconic San Diego restaurant has been around since 1985 and includes American, Italian, and Mexican cuisines on its menu and is best known for it’s vast Frittata menu!

Learn a little about San Diego’s beginnings with a stop at Old Town San Diego. Representing the period of 1821 to 1872 you can see and experience the city as it moved from its Mexican heritage to an American settlement. The Old Town area includes shops, restaurants, a cemetery, reconstructed town buildings and five of the original buildings from that era! One of these, the Whaley House Museum, was constructed in 1857 on the grounds of a former gallows and is one of only two officially designated Haunted Houses in California! It was home to Whaley family and was also a general store, San Diego’s first theater and it’s second county courthouse. 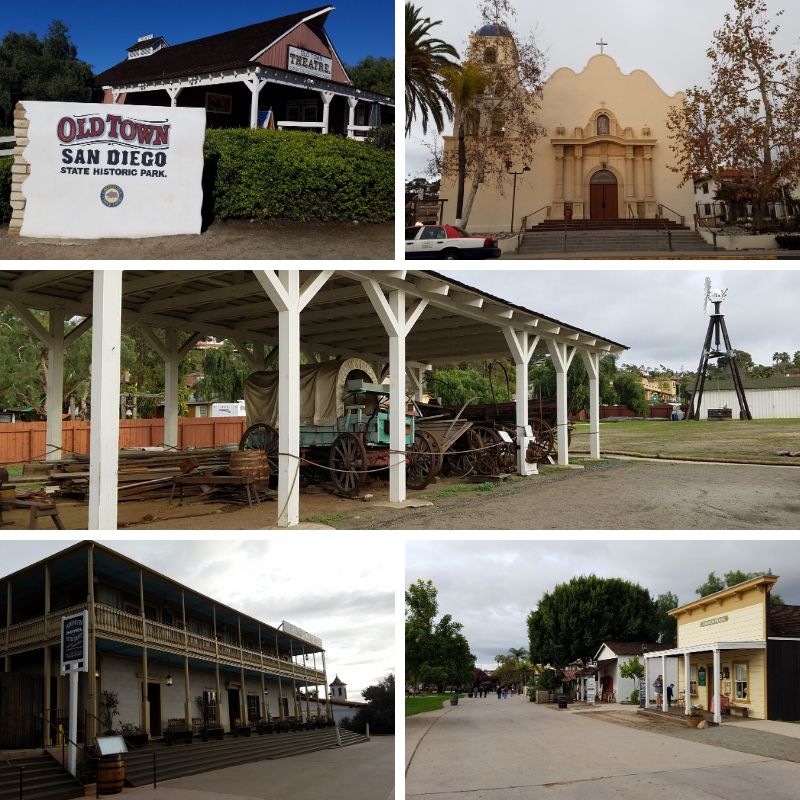 An Afternoon of Things to Do in Coronado

You can’t go to San Diego and not experience the beaches or the waterfront. And there are plenty to places to enjoy both here, but my favorite is Coronado Island.

After you cross the Coronado Bridge, head towards the east side of the island and take a walk along part of the Bayshore Bikeway to enjoy the water views and the San Diego skyline. (The entire bikepath is 24 miles long and bike rentals are available on the island if you’re inclined to ride the entire route.) 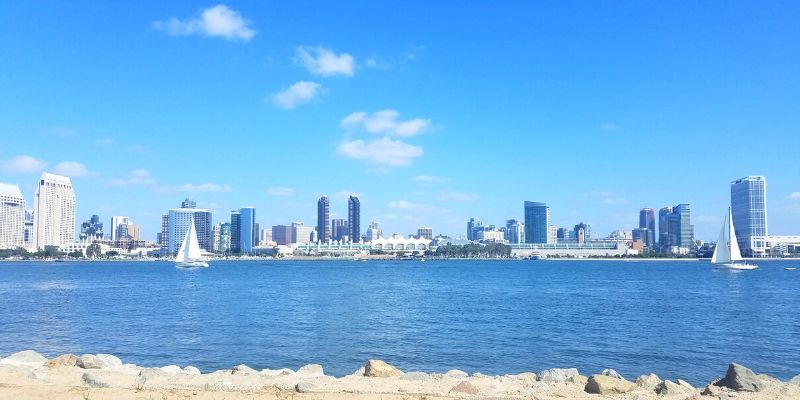 Along the way, be sure to look for the beautiful bronze sculpture “Penelope” by Michael Stutz, based on Odysseus’ wife in Homer’s epic poem “The Odyssey”. 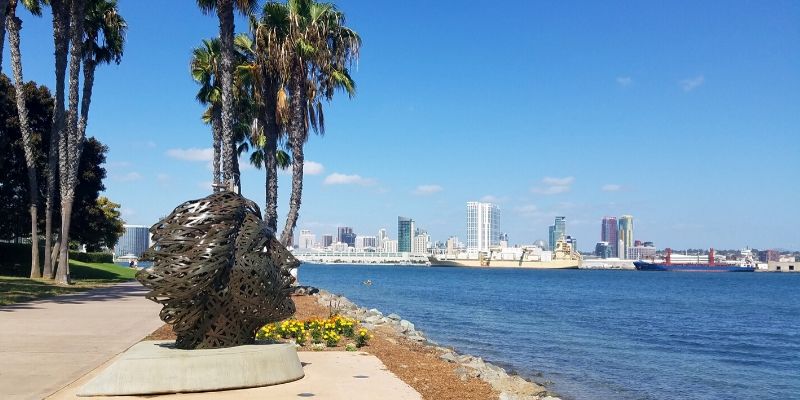 Across the island is the iconic Hotel del Coronado. Built in 1888, it is listed as a Historical landmark. Walk around the hotel grounds (some areas are private for guests, but much of it is public) and get yourself an ice cream at Sundaes at the Del. 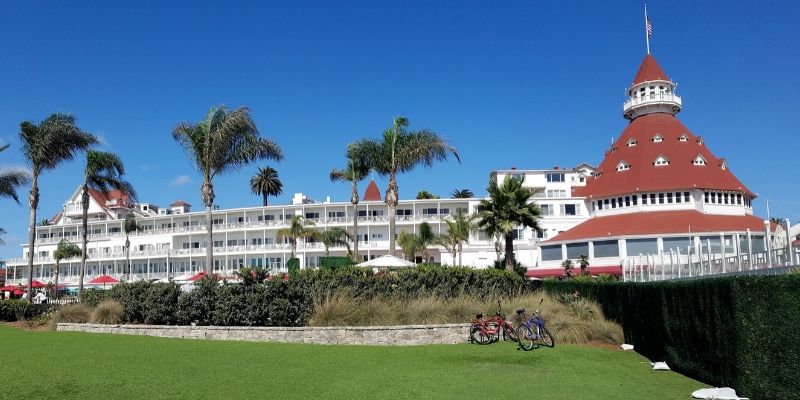 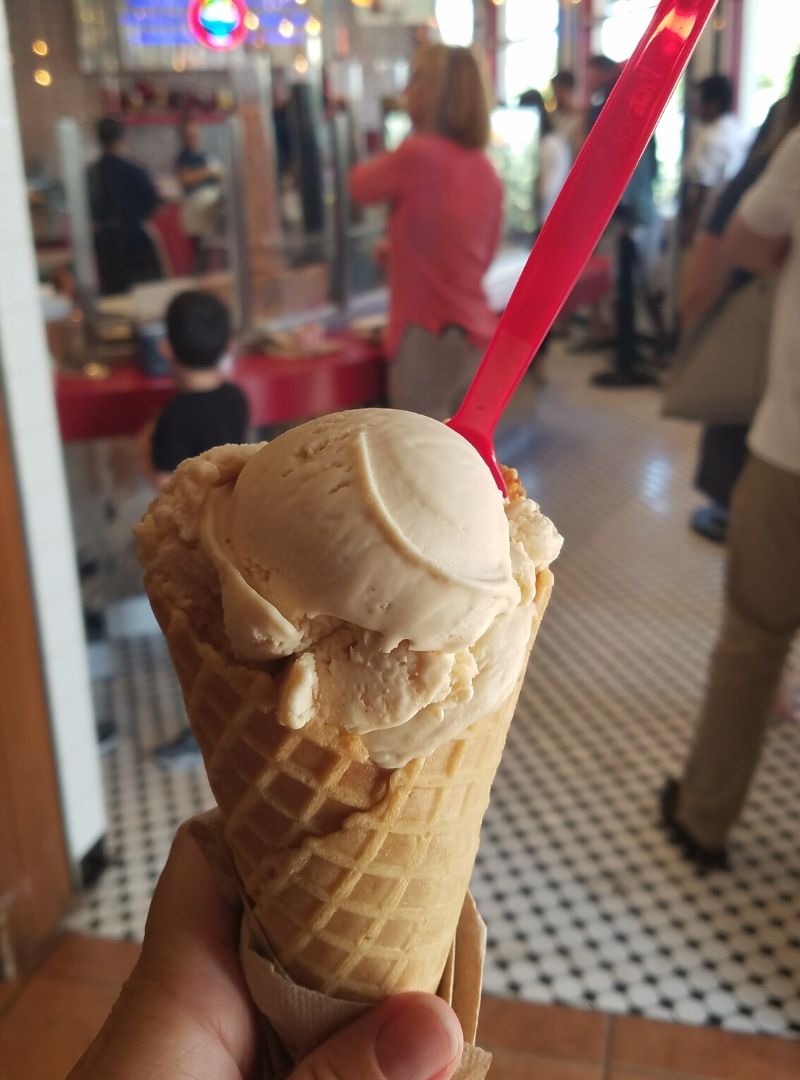 Then find your spot on the beach, spread out your towel and enjoy the sunshine for the rest of the afternoon. 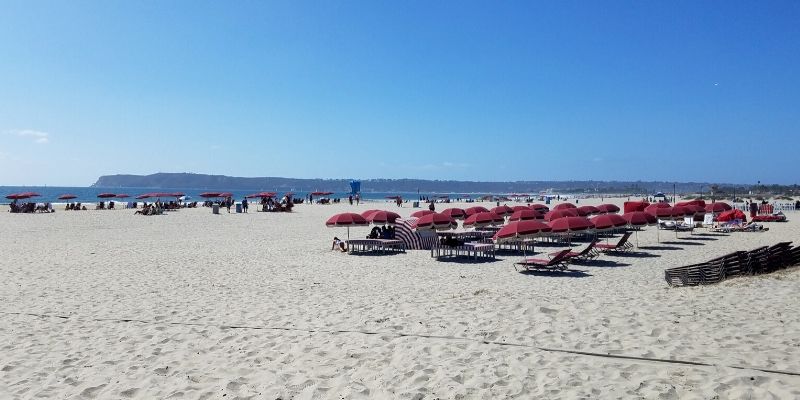 Lastly, watch the sun has set, the sky change colors, and then pack up the car to start your drive back to Los Angeles! 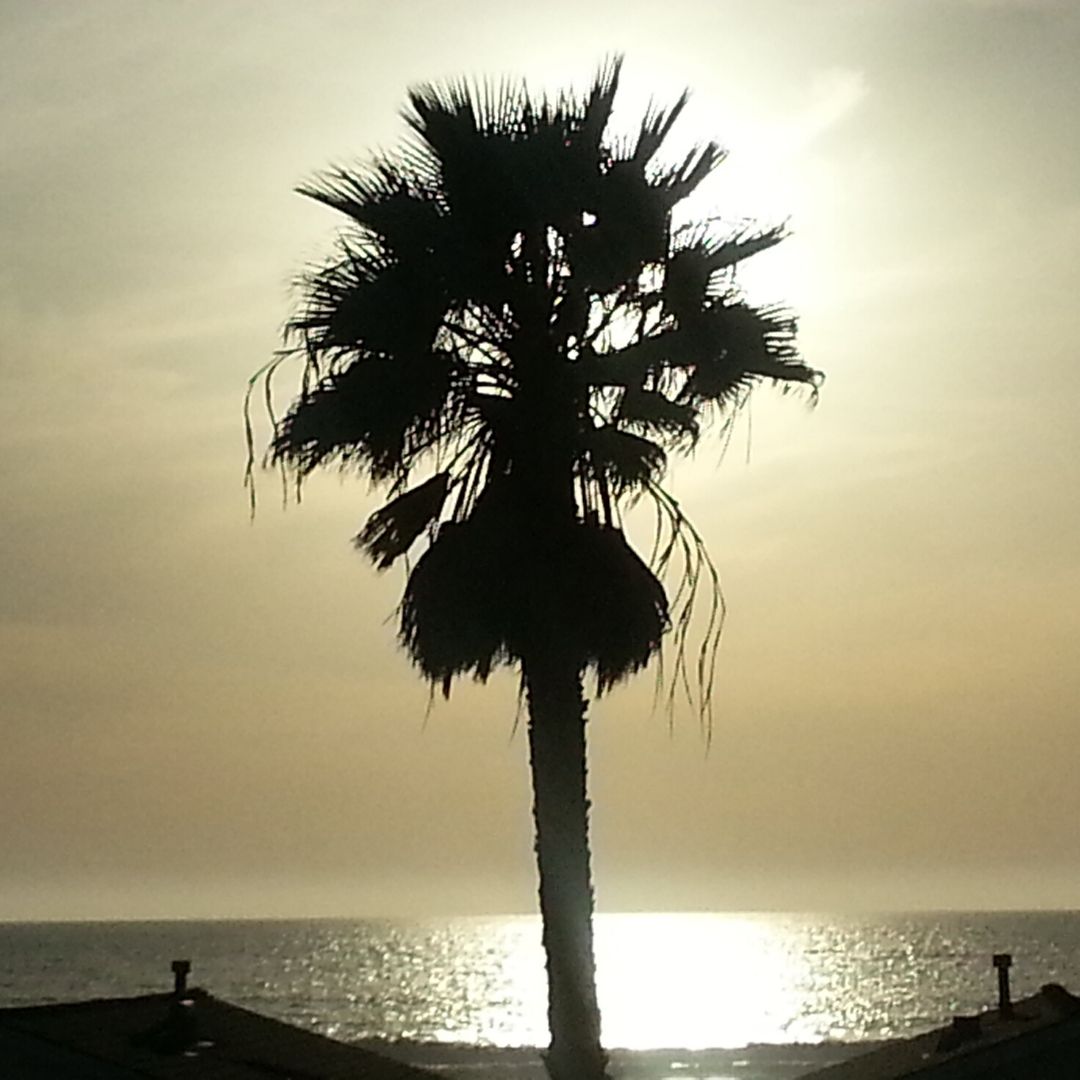 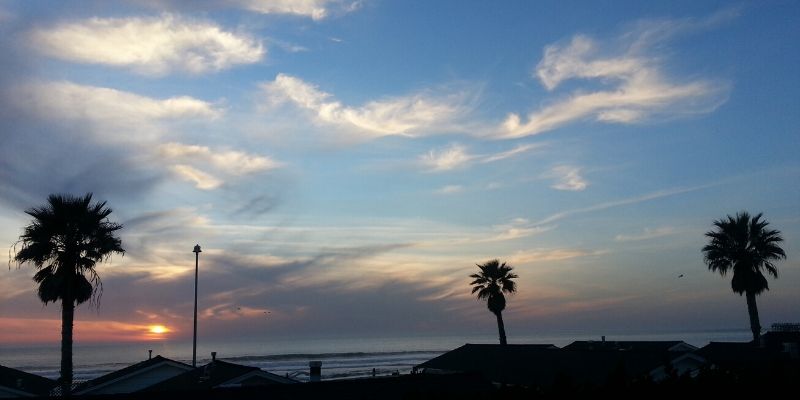 My budget for 2 Days in San Diego: 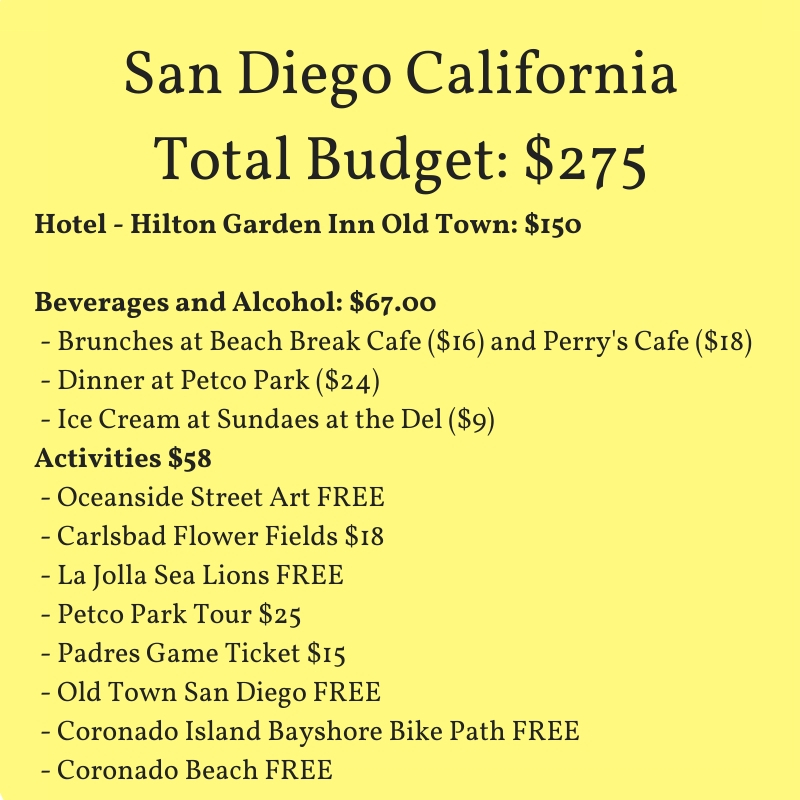 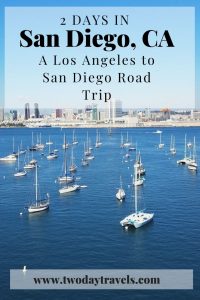 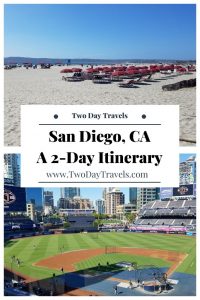 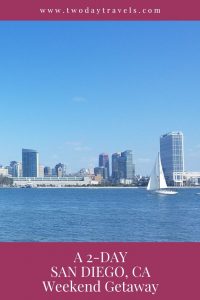