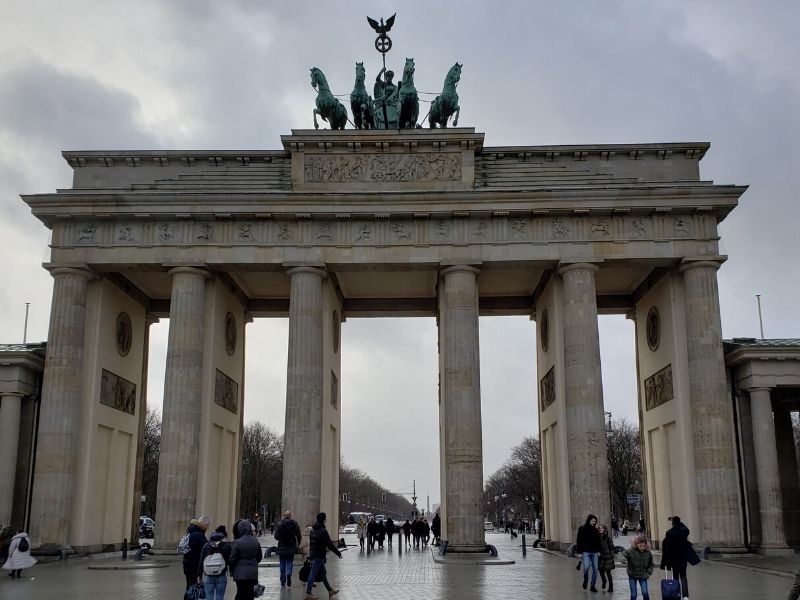 Berlin is the capital city of Germany and has a history that goes back to the 13th-century It is a European hotspot for culture, politics, technology, education and media. Like many major cities, there is no way to experience all of it in just two days, so on this particular rainy, winter weekend, I focused my sights around recent history, namely the Nazi/World War II and the Communist/Berlin Wall eras. It made for a profound and educational weekend in Berlin.

I started my trip with a very tasty Spinach, Feta, Bacon scramble with warm bread and a flat white coffee to start of the day. And, look, American-style bacon!! 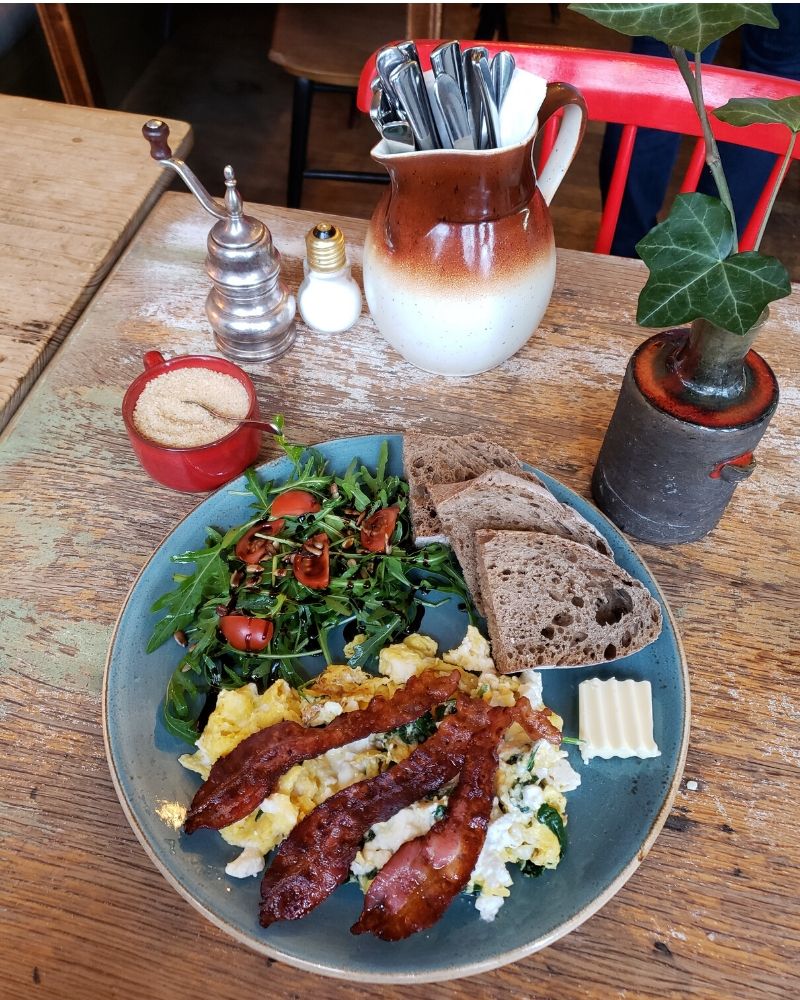 Along Bernauer Strasse, between Strelitzer Strasse and Gartenstrasse sits a memorial park commemorating how the Berlin Wall affected the citizens of the city and the deaths that occurred along the wall. The 1.4-kilometer memorial park includes a 70-meter section of the Berlin Wall preserved with the border fortifications, i.e. the “death strip” in tact.

I started at Strelitzer Strasse, where metal poles now stand in place of the wall. Placards and signposts with photographs, videos, and audio recordings in German and English tell the history and anecdotes of the people who lived there. Stones are laid in the ground to mark the areas where people tried to tunnel underneath the wall to escape. Images of people fleeing across the street to the West as the wall was being built or jumping out of windows of border buildings stand in contrast to the park-like environment that exists here now.

As I walked the 1.4 kilometers down the length of the memorial, I came upon a partially excavated building that once sat along the street. I could see where windows were filled in with bricks to prevent people from escaping. When the wall started to go up and people on the East side realized what was happening, they would jump out of houses along the border. One of the images in the exhibit was of firemen on the West side on standby with a net to catch jumpers.

Further down the street the Chapel of Reconciliation now stands on the original spot of the Protestant Church of Reconciliation. The wall was built placing the church in the “death strip” between the Western and Eastern sections of wall, making the church completely inaccessible to everyone except the soldiers guarding the wall, who used it as an observation tower. This stood for a number of years, until authorities destroyed it in 1985. The original church bells now hang inside a wooden scaffolding in front of the chapel and are rung by hand.

Finally I reached the remaining section of the Berlin Wall. From the ground I can only see the large gray concrete wall and an observation tower peeking out above it. This section of the memorial bears an inscription that reads: “In memory of the division of the city from August 13, 1961 to November 9, 1989 and in commemoration of the victims of Communist tyranny.”

Across the street is the Documentation Center and a 5-story observation platform. Climbing up the stairs, you slowly start to see above and over the Wall, into the “death strip” and across to the cemetery lying beyond it. 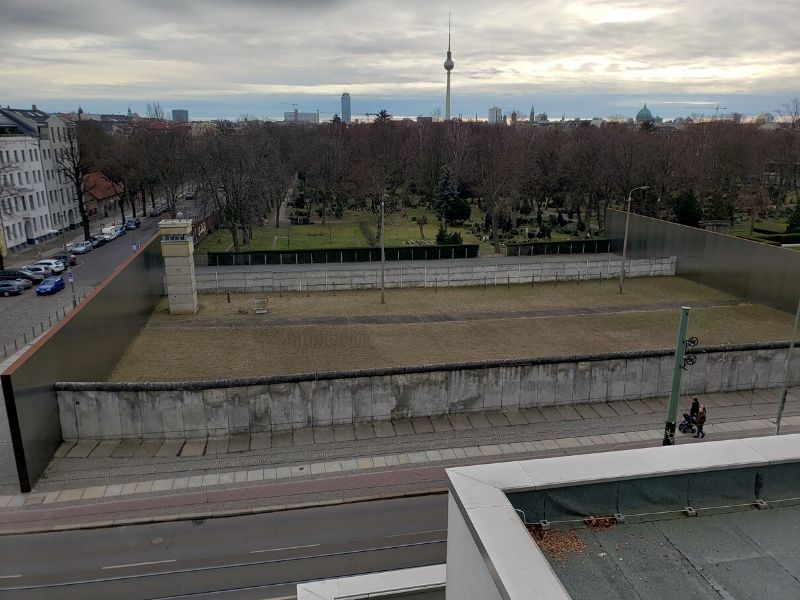 Inside the Documentation Center, you can learn more about the events and history of the wall. The Memorial is working to collect the stories of Contemporary Witnesses to preserve in an oral history archive and make it accessible to the public.

Simply taking a walk through the city you can see a wide variety of art and architecture, while the history of the city just envelops you. 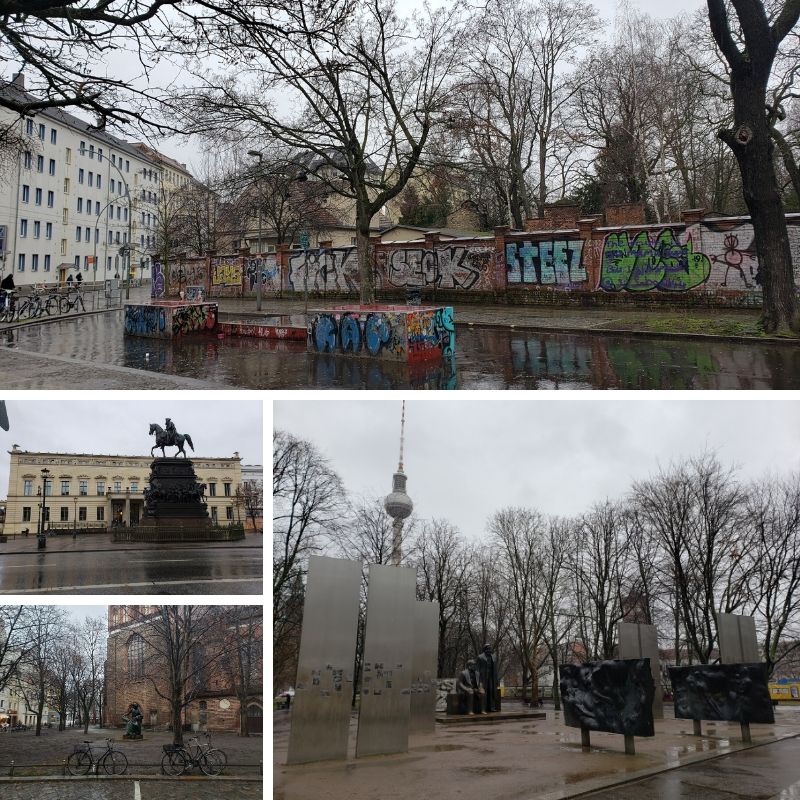 I stepped out of the rain and enjoyed a mid-day tea & cupcake break at Tiger Toertschen! 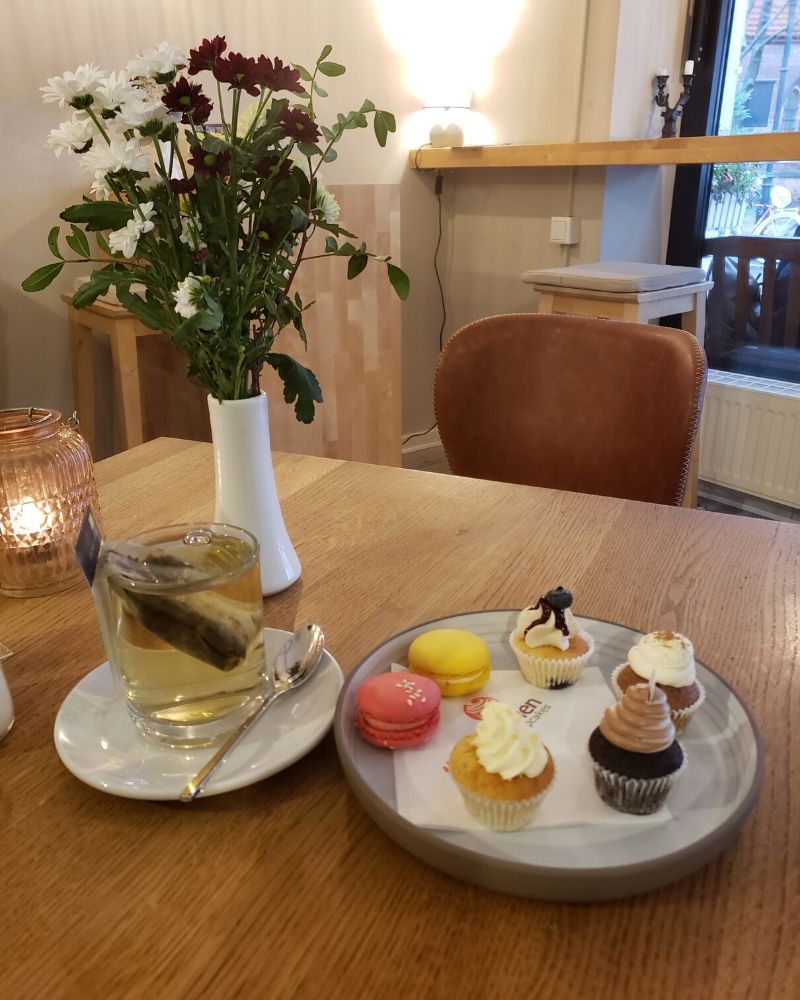 This open-air street art gallery is comprised of 105 murals painted on a 1.3 km long remnant of the Berlin Wall. Painted in 1990, the murals are dedicated to the fall of the Berlin Wall and the reconciliation of Germany after. The city continues to grow around the gallery, as scaffolding covered a section of the wall where a new building was being erected behind it. 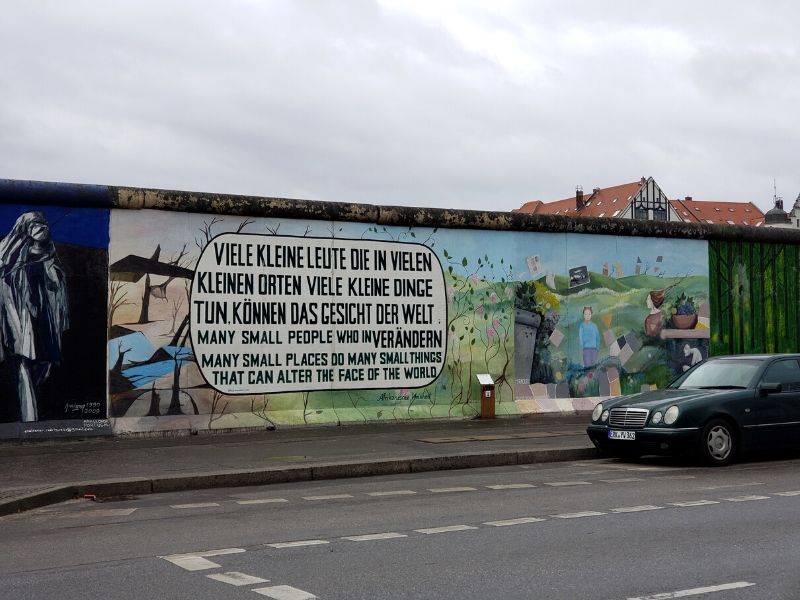 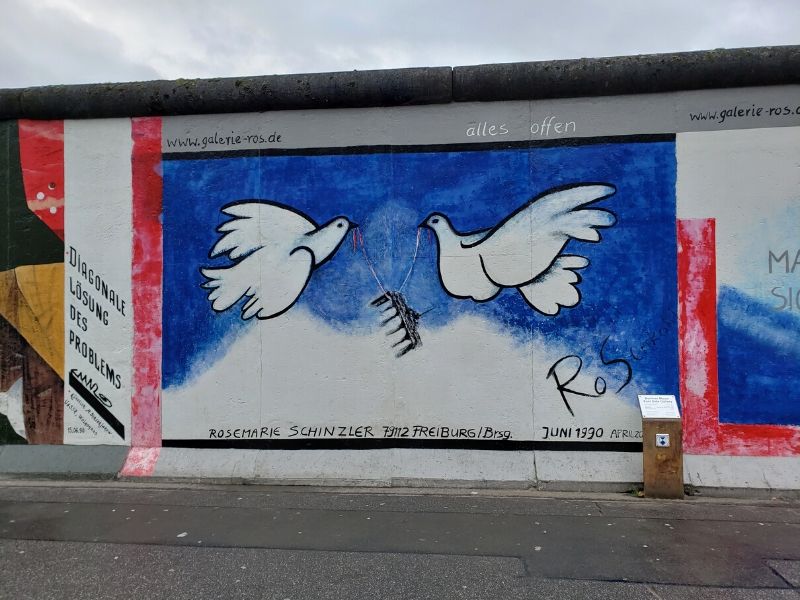 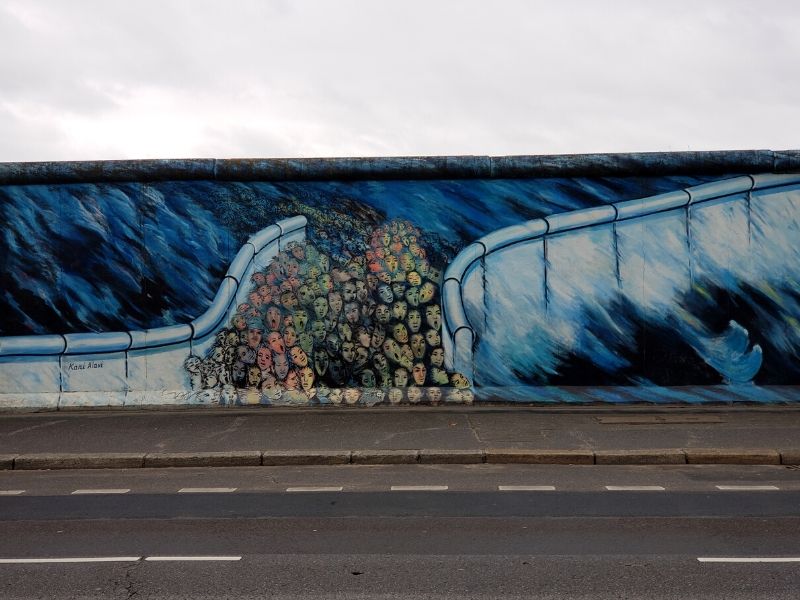 Around the corner from where I was staying, I found a charming Italian café where I enjoyed a Roasted Goat Cheese with Rosemary Crostini and Apple Mustard with red wine for dinner. While the food was amazing, I especially loved that the restaurant was playing 70s rock music, including The Commodores, Simon & Garfunkel, and Patti Labelle. 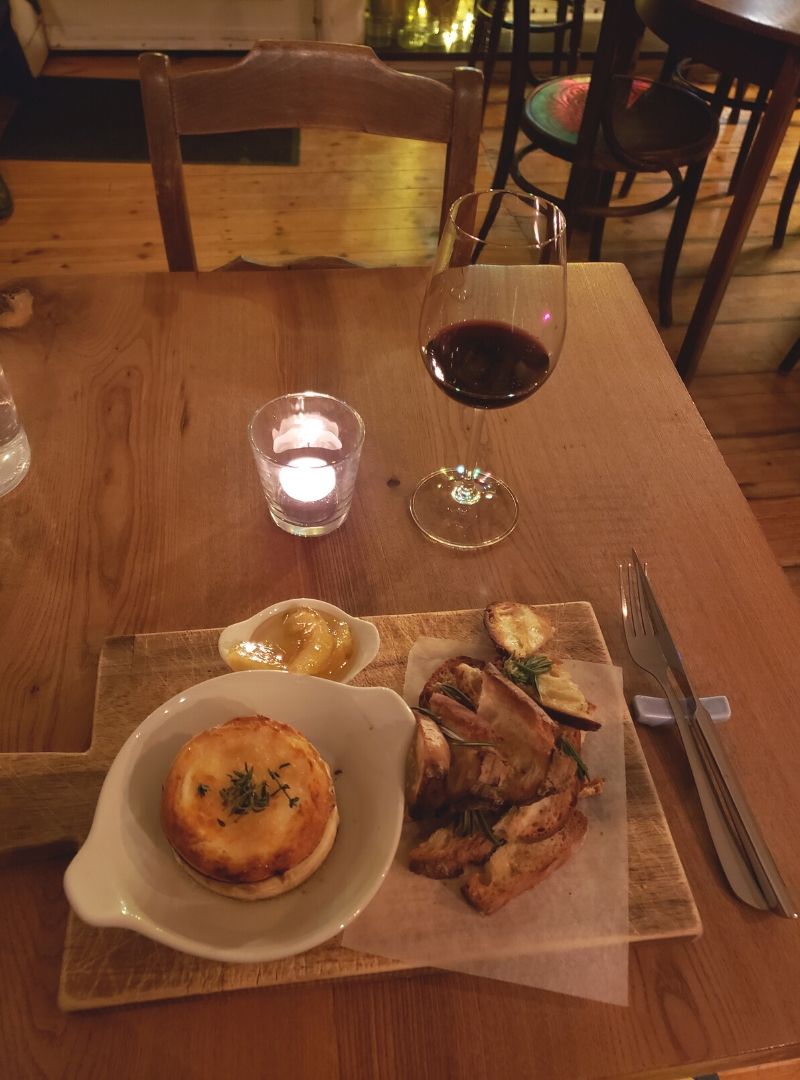 I enjoyed a breakfast of quiche and coffee at the Westberlin Café before starting my second day of sightseeing. This café is also a book and magazine distributor, so you can enjoy some reading with your cup of joe! 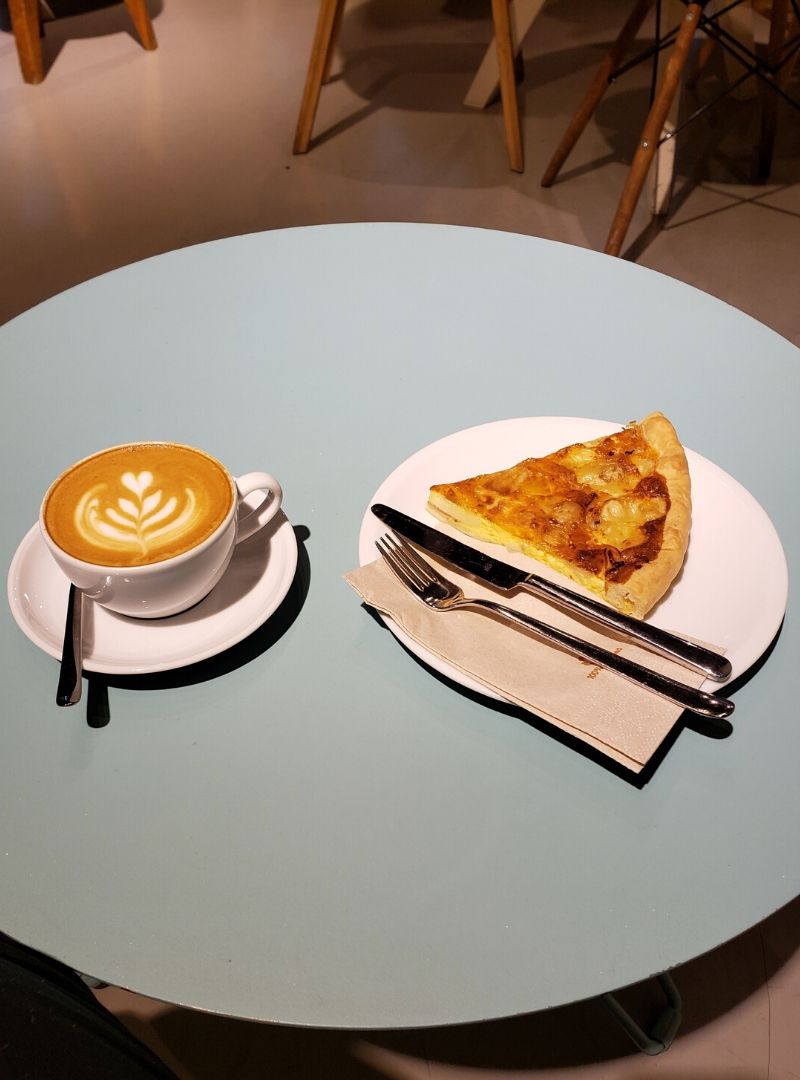 This seeming nondescript memorial designed by Micha Ullman is actually quite profound. Laid in the ground of a plaza surrounded by the State Opera, Humboldt University, and St. Hedwig’s Cathedral is a glass square that looks down into empty library shelves. The empty shelves represent the 20,000 books that were burned during the infamous Nazi book burning ceremony on May 10, 1933. Nazi German Student Union and their professors burnt books deemed “against the un-German Spirit” . There are two bronze plates also set in the ground nearby that reads (translated from German):

That was but a prelude;
where they burn books,
they will ultimately burn people as well.
Heinrich Heine 1820

If you have a chance to visit in May, the students of Humboldt University hold a book sale on the square each year to mark the anniversary of the 1993 Book Burning. 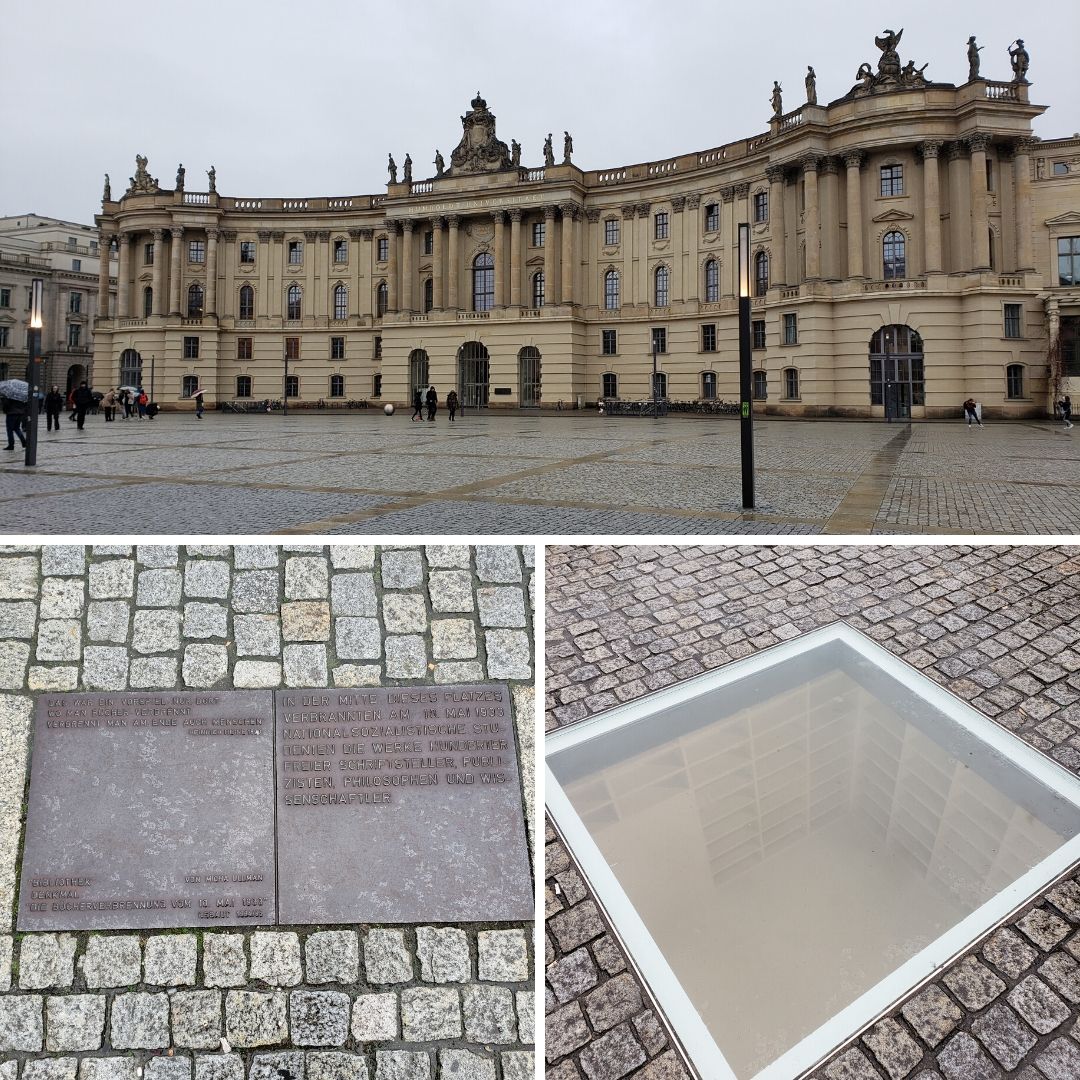 Located on a square that was previously the administrative center for Hitler during World War II, are 2,711 concrete slabs, a Field of Stelae, that stand in memoriam to the 6 million Jews murdered in World War II. 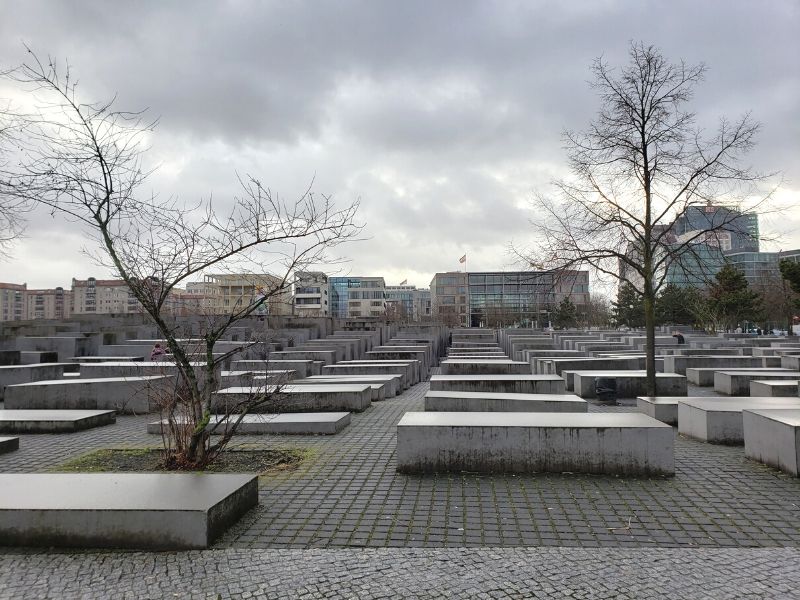 The sound of the name is quite jarring, but then the subject matter of the museum is as well, so from that stand point it’s appropriate. Housed in the former headquarters of the Third Reich Secret State Police, the Topography of Terror is an indoor/outdoor museum that details the history of repression under the Nazis.

The museum highlights the SS and police of the Third Reich, the crimes they committed across Europe, and the propaganda tactics used by Hitler and the SS. With over 800 square meters of permanent exhibition space plus additional special exhibits and a library, there is an immense amount of information here. 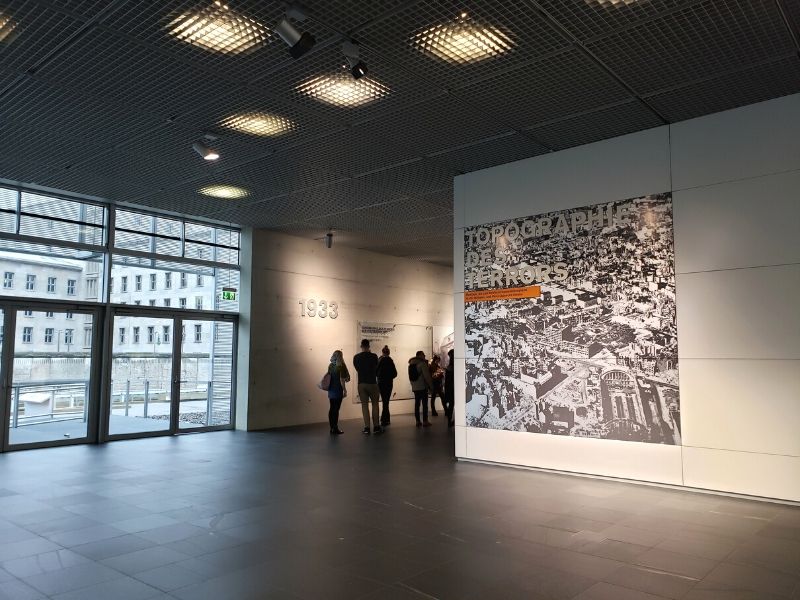 In the Special Exhibition Space was a photo exhibit “The Persecution of Jews in Photographs, The Netherlands 1940-1945.” During this time 107,000 people of all ages were deported from the Netherlands to German concentration camps and approximately 102,000 of them were murdered by SS or died due to the extreme working and living conditions. The exhibit was thought provoking and powerful.

The outside Exhibition Trench is a covered open-air exhibition area alongside the longest remaining segment of the outer wall. The exhibit while I was there, Germany 1945 – Bombed-Out Cities, showed images of seven different German cities before and after being bombed in World War II. 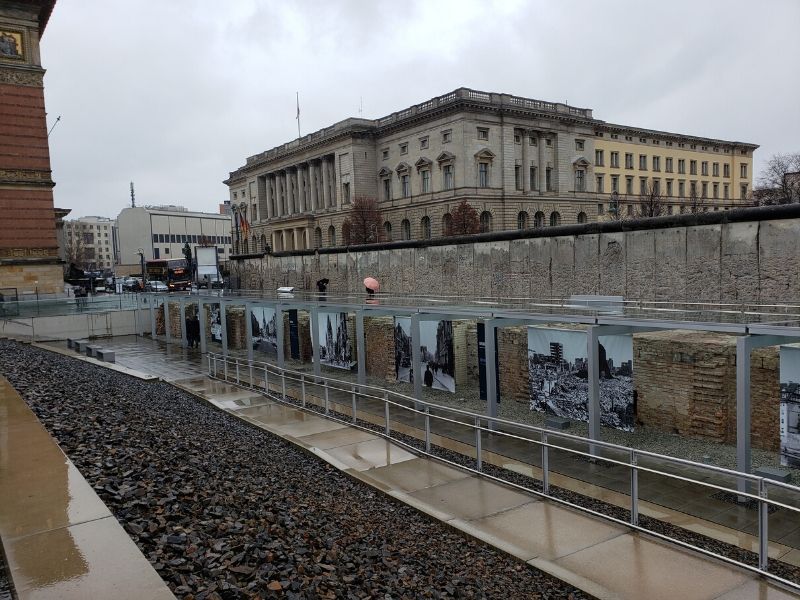 I had saved the Topography of Terror for last as I felt I would want to take time here, but in the end I wish I had seen it earlier in the weekend or had spread it out across a couple of visits. I was experiencing some information overload by the time I got here.  There is so much information to take in at this museum – both inside and out – and being a weekend it was a bit crowded. I think when I get a chance to go back to Berlin, I will see this again, and plan on either arriving earlier in the day when it’s potentially less crowded or visiting more than once for shorter amounts of time.

I enjoyed a late lunch/early dinner at Cocolo Ramen that include a Pork Pho and glass of white wine. 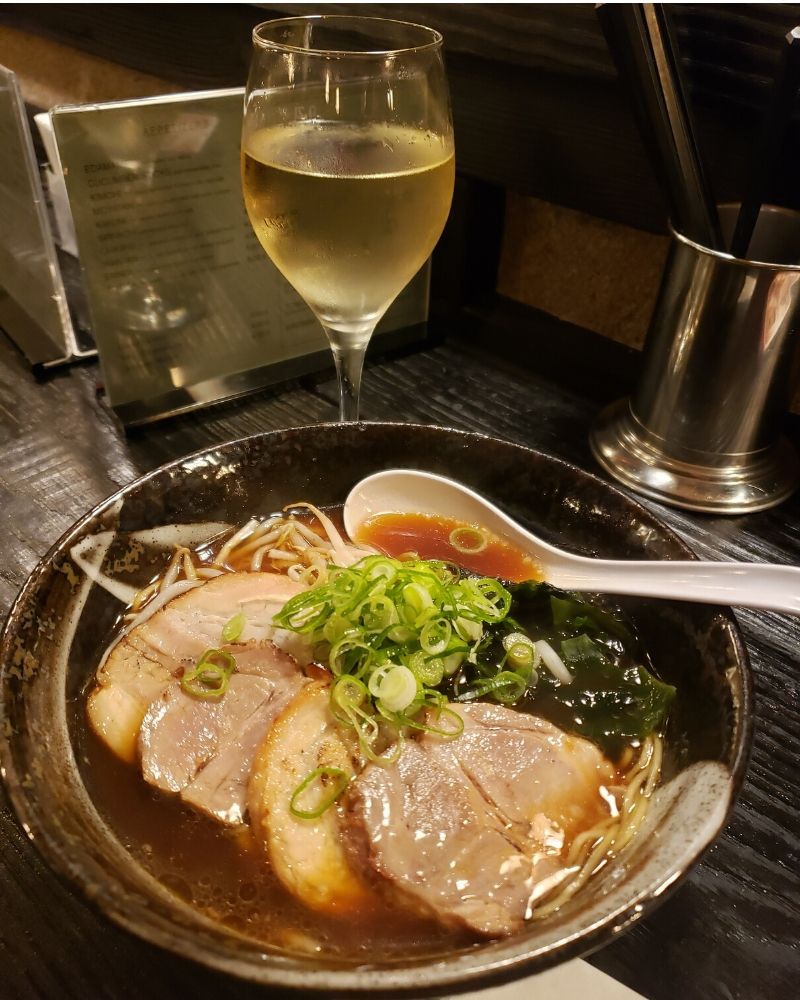 Housesitting for a Friend
Cost: FREE

I am very grateful for the opportunity to housesit for a friend while I was in Berlin, so I was able to save on hotel costs while I toured the city. But to give you an idea of what costs could be, my research shows hotels and AirBnB can be had for an average of $115.

My budget for a weekend in Berlin (including estimated hotel costs): 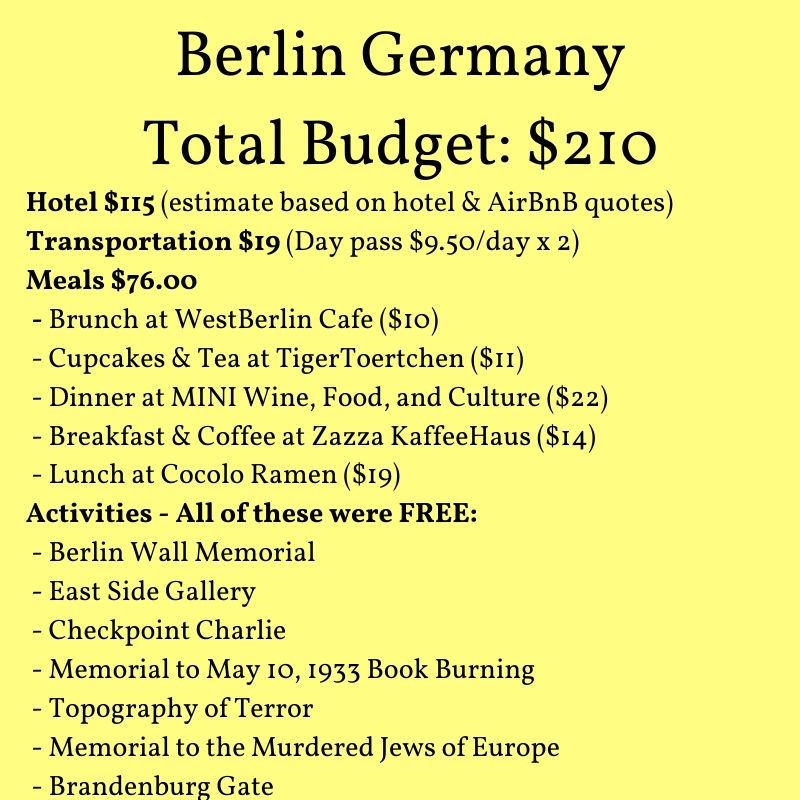 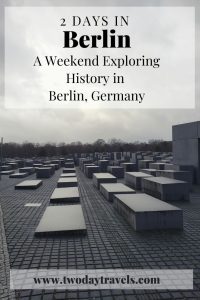 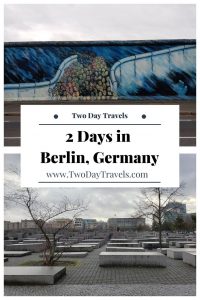