A Two Day Luxembourg Holiday for $200! 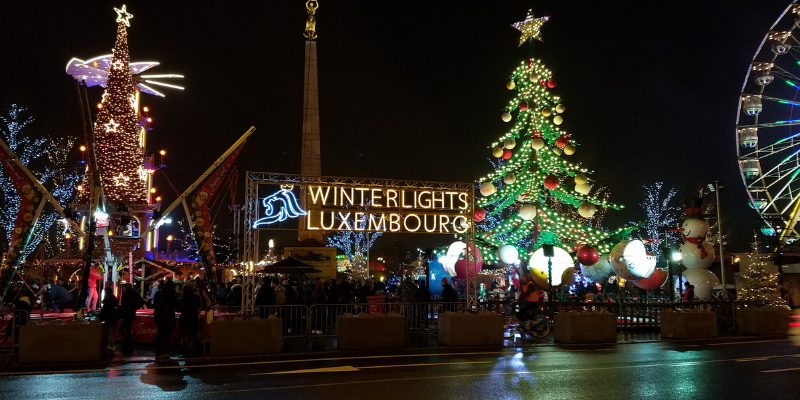 Christmas in Luxembourg is beautiful and, even in the rain, a fun experience. And to make it more enticing, you can visit Luxembourg City in 2 days for only $200!

The first thing I did when I arrived was to take a walk to see the Christmas Markets. They were open during the day, although not very crowded as it was raining. But it was still fun to see. There are three Christmas Markets in Luxembourg City I visited – one at Place d’Armes: 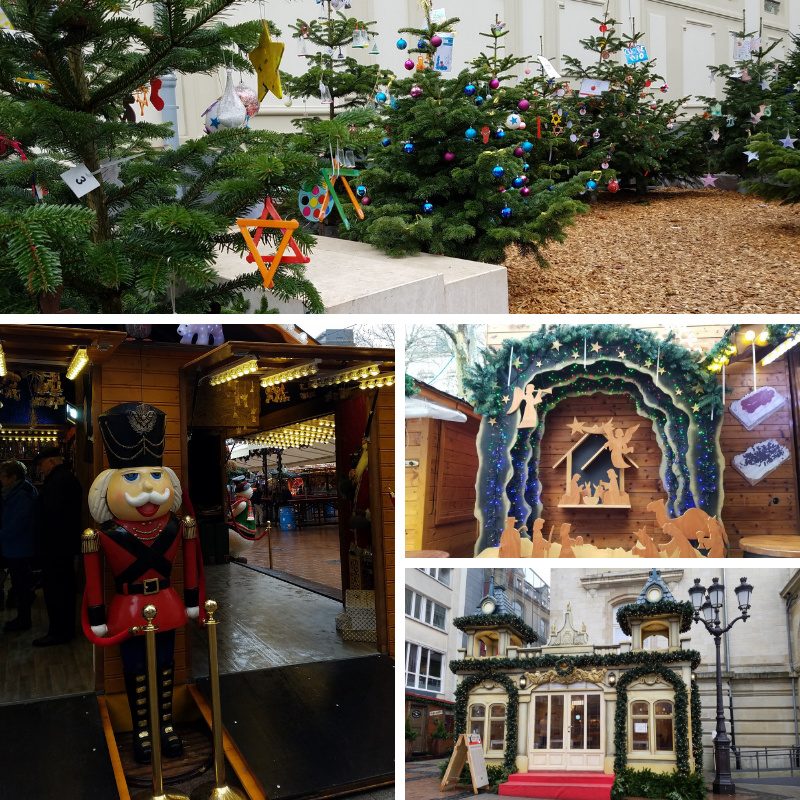 …another at Place Guillaume II, where they also have a skating rink: 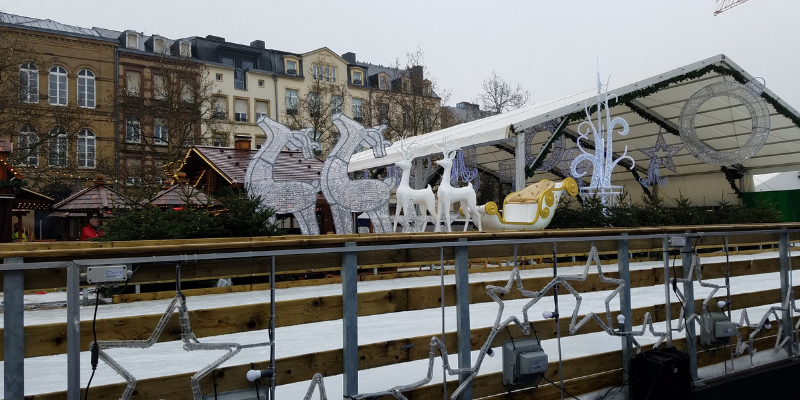 … and at the Place de la Constitution: 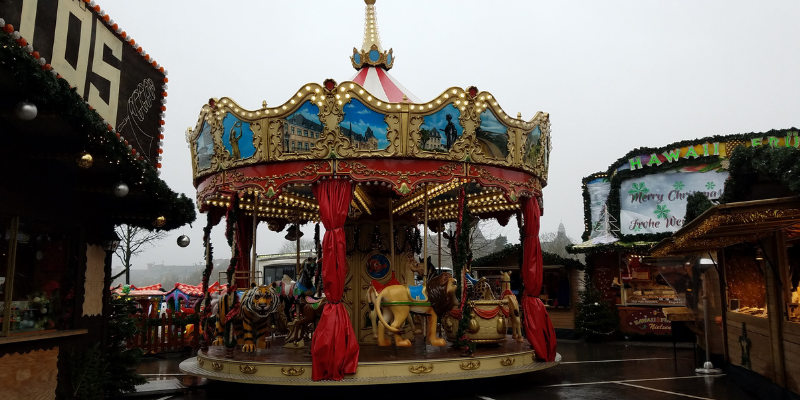 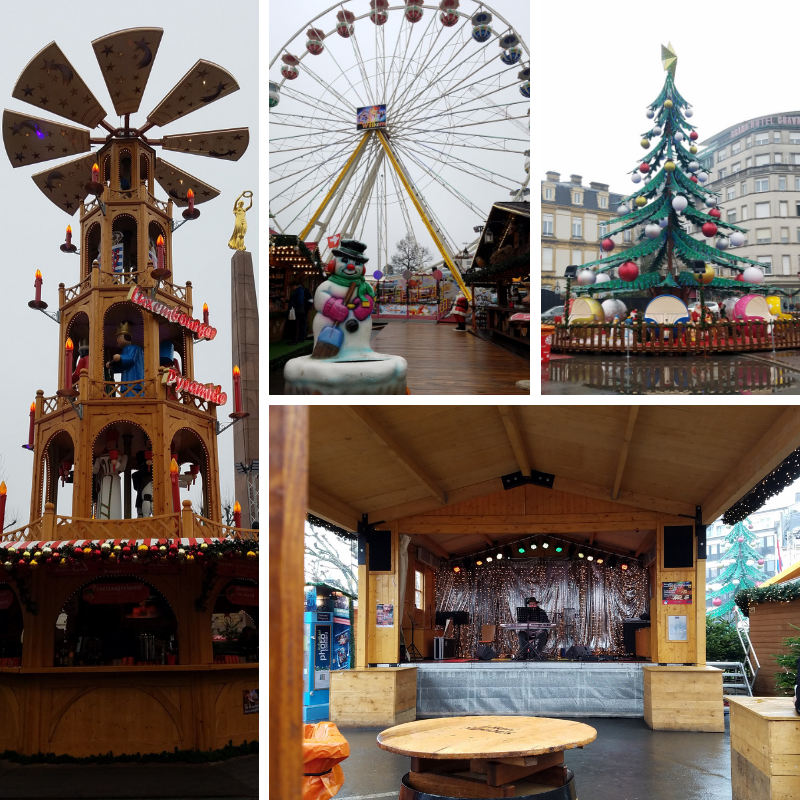 Near the Christmas Market at Place de la Constitution is the beautiful Cathédrale Notre-Dame. While admiring the architecture of this early 17th-century church, I noticed an advertisement for a free Christmas concert about to start. So I took advantage of the chance to get out of the rain and enjoy an organ concert inside this beautiful cathedral.

After the concert, it was dark when I walked out and I was immediately greeted with the sparkly lights of the Christmas Markets at night! Aptly called Winter Lights, Luxembourg’s festivals do not disappoint once the sun goes down. 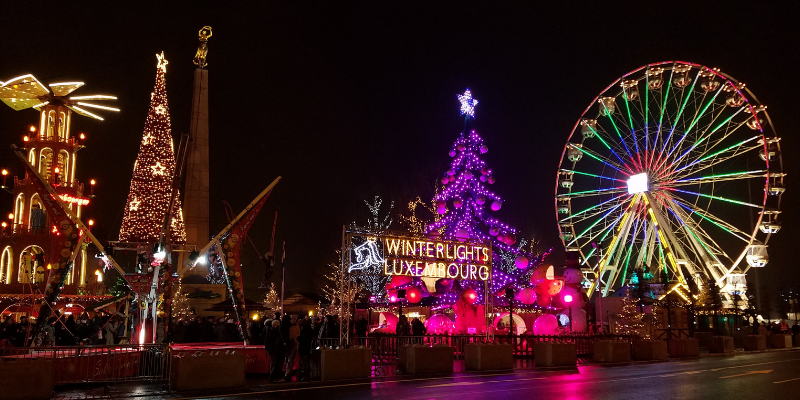 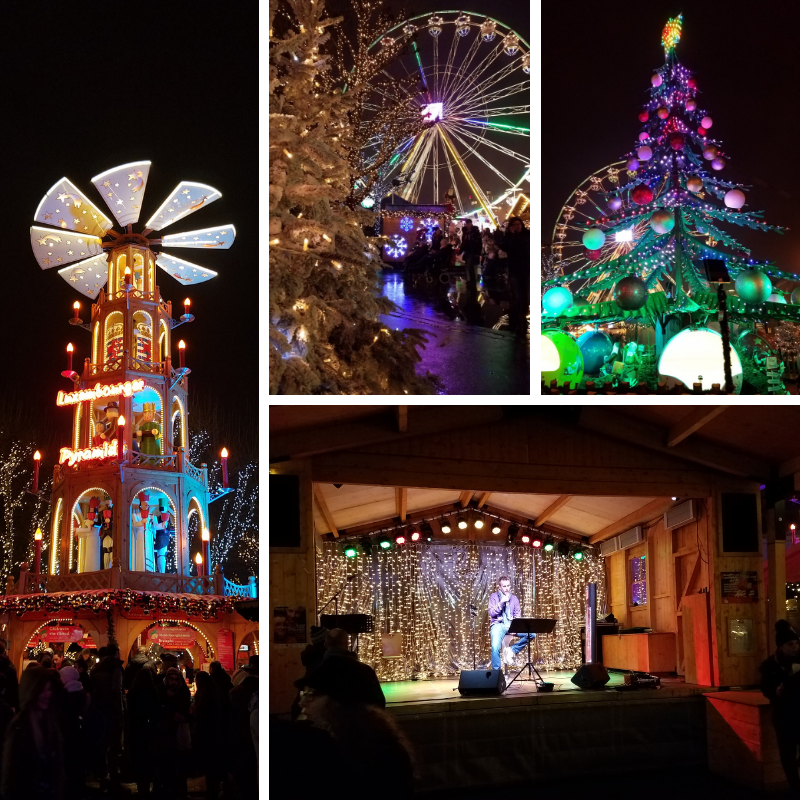 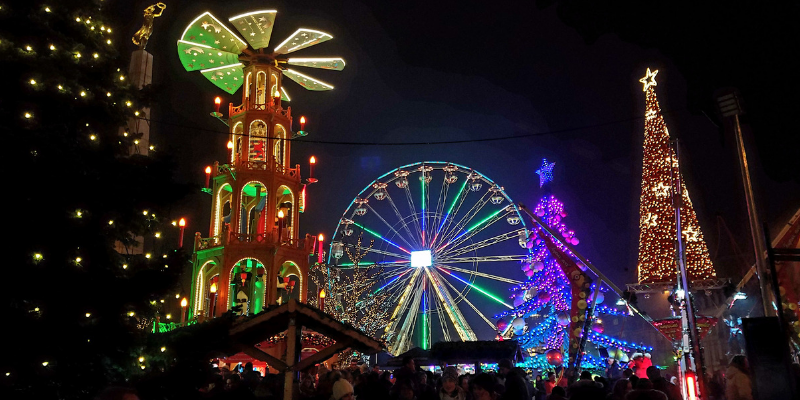 Wondering if I took a ride on that Ferris Wheel? You know I did!! And saw a gorgeous view of Luxembourg’s Winter Lights from above! 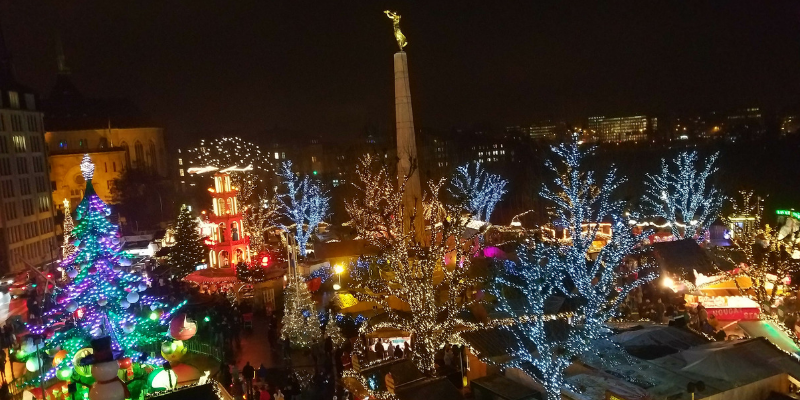 Notice the tall stately statue in the center? That’s the Gëlle Fra – or Golden Lady – a memorial to those Luxembourgers who died during World War I. Although taken down by the Nazis in 1940, it was restored and replaced in 1984. She now stands as a symbol of freedom and resistance for the Luxembourg people.

I continued on to the other markets and found them to be just as lovely! After admiring the lights, watching the ice skaters skate, and hearing the singers perform on stage, I enjoyed some hot chocolate ($5) and bami noodles ($6) from the food stalls for dinner. 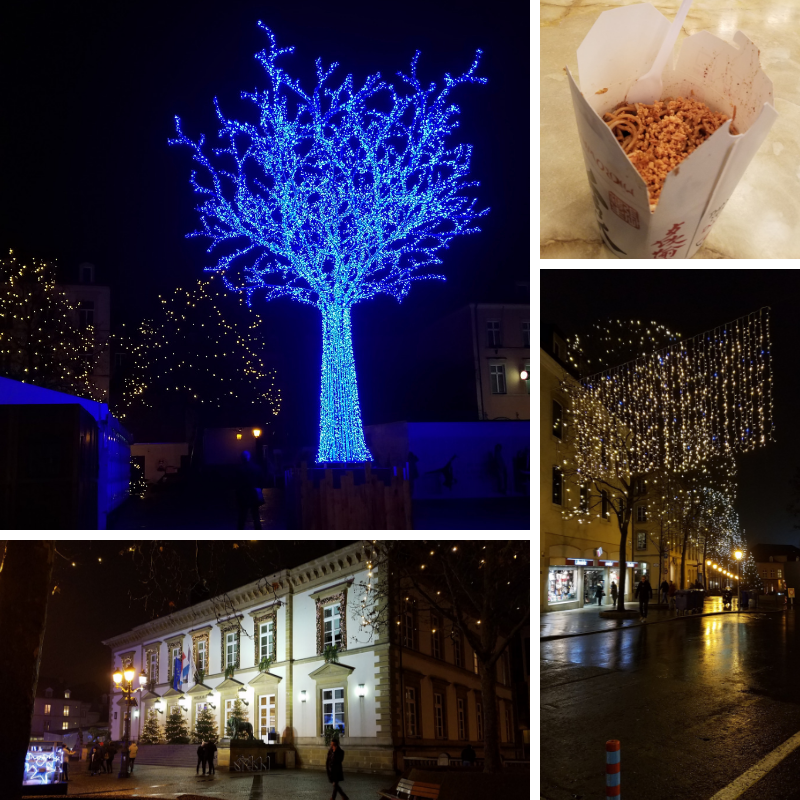 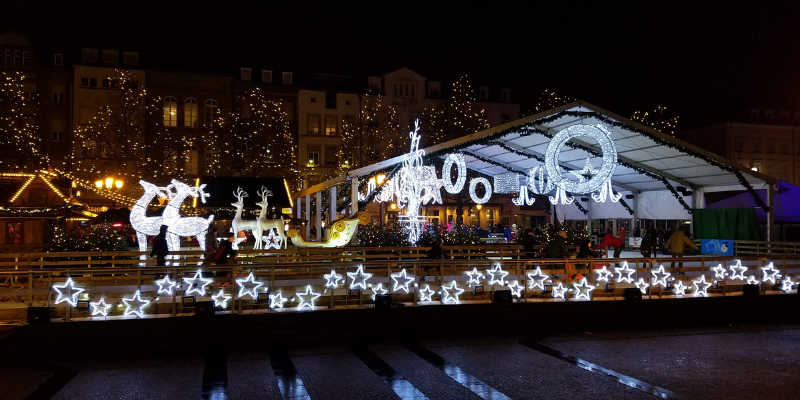 The next morning it was still pretty rainy, but I decided to take a walking tour of the city. Although there are plenty of museums, galleries, stores, and other inside activities in Luxembourg, I was honestly feeling a little ‘museumed-out’ from my previous travels and decided some outside activity, even in the rain, would be more welcome.

After leaving the hotel, I crossed the Passerelle – the Luxembourg Viaduct, or to the locals, the Old Bridge – and found myself at the Monument National de la Solidarité Luxembourgeoise (National Monument of Solidarity). It honors both those who died during World War II and the resistance and solidarity of the Luxembourg people against the Nazi occupation. 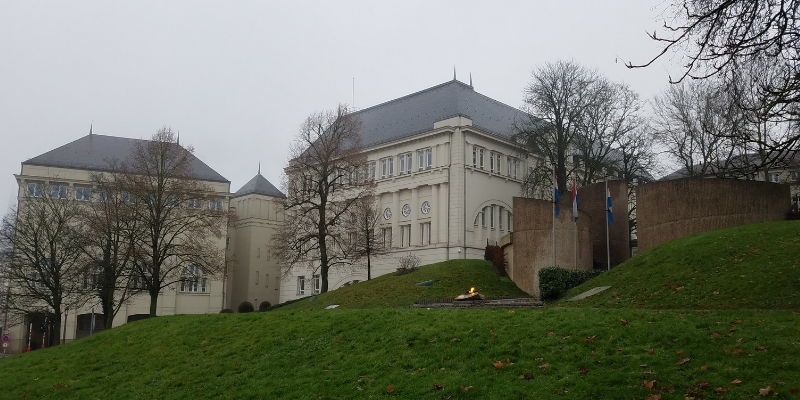 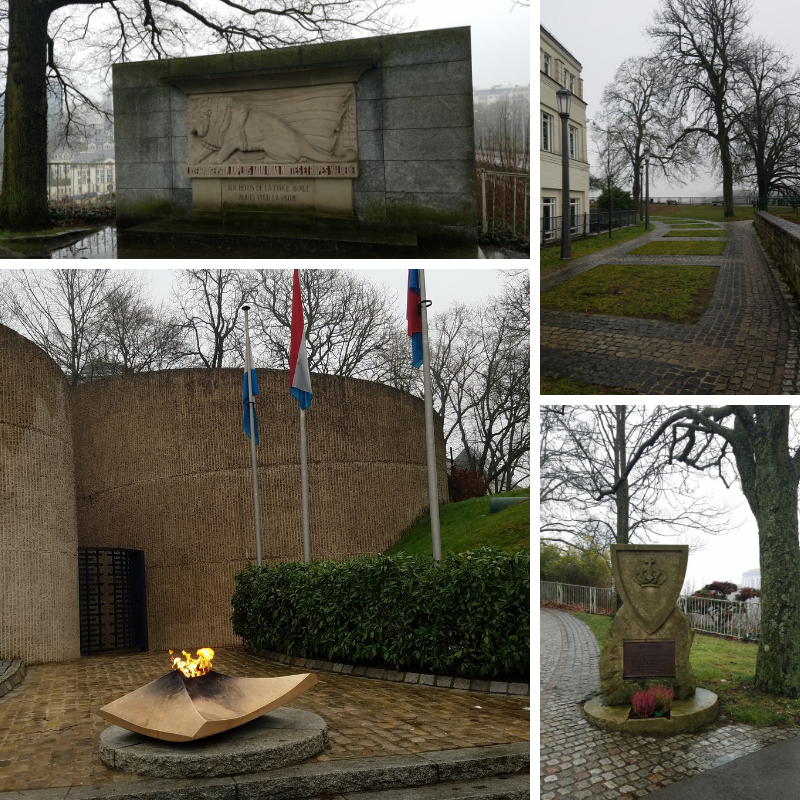 Following the brick pathway pictured above (top right), I could look back at the Passerelle I had just crossed, the Grund neighboorhood below (which I’ll share more about shortly) and came across this stunning statue. (I am having a hard time finding information about it, but have seen it referred to as Peace Doves. If you know more about it, please leave me a comment and I’ll update this section!) 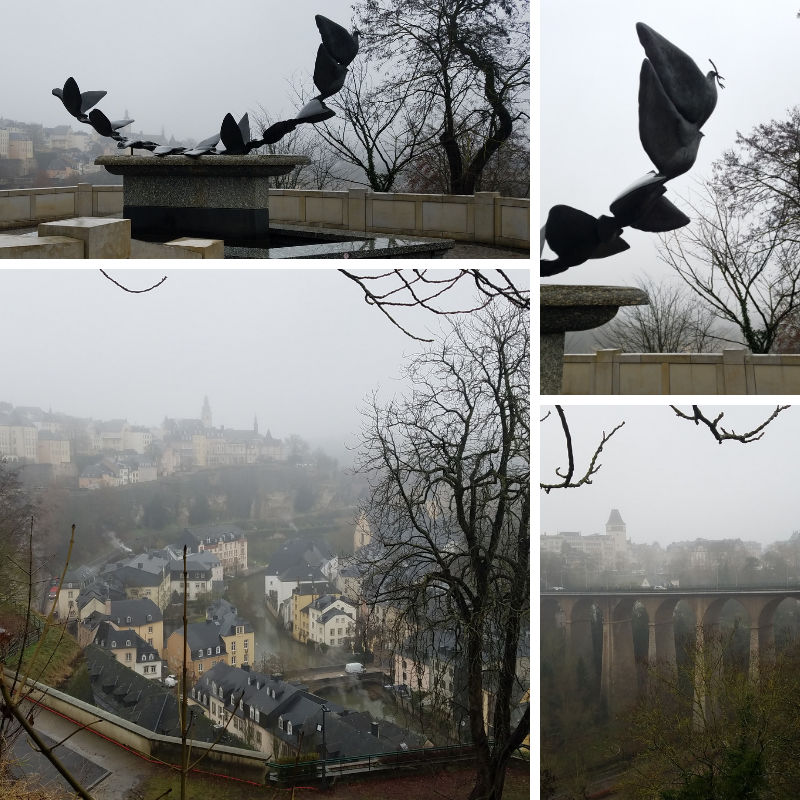 Continuing along the pathway is the Plateau de Saint Espirit, home to Luxembourg’s Cité Judiciaire which houses many of Luxembourg’s courts and legal offices. 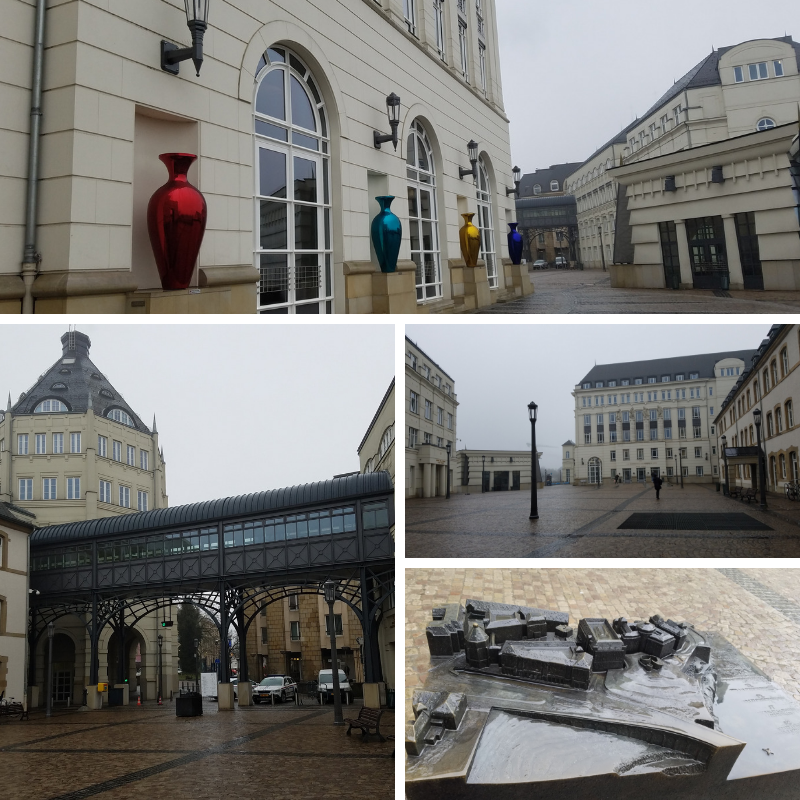 From the Plateau de Saint Espirit, you can take a lift 45 meters down to The Grund, the neighborhood I looked at earlier on my walk. There was a small Christmas Market down here, Marché Gourmand am Gronn, although it was still early in the day so most of the stalls were closed and the workers were only starting to get ready for their day. 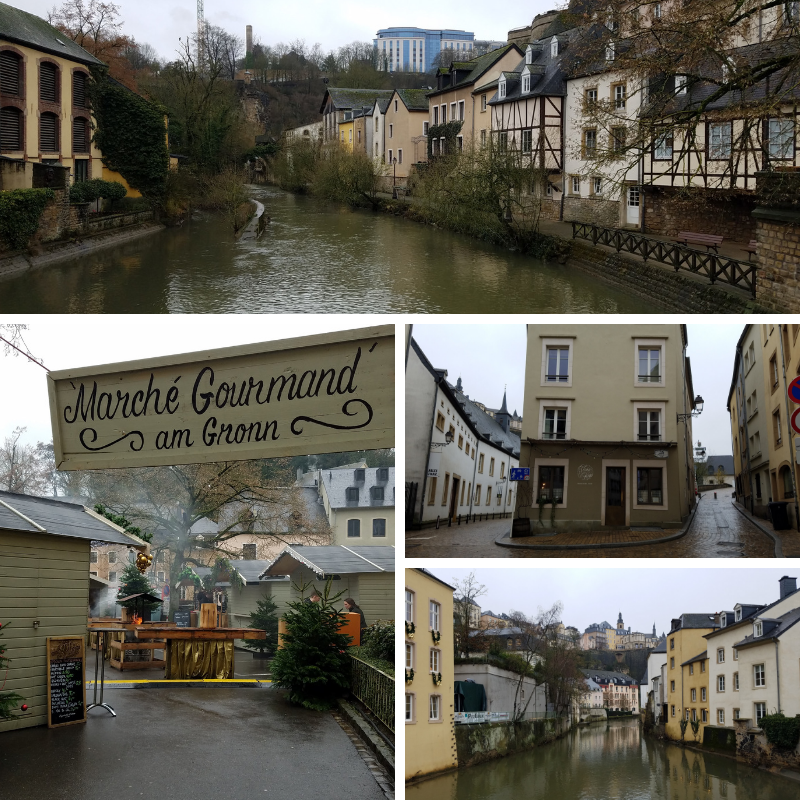 I wandered the streets of the Grund neighborhood, heading towards the Wenzel Wall – a defensive city ring wall around the city. In the bottom right photo stands Jacob’s Tower (or, the Dinselpuert), which is a gate to the Wenzel Wall. Climbing the stairs, you get a beautiful panoramic view of the city. 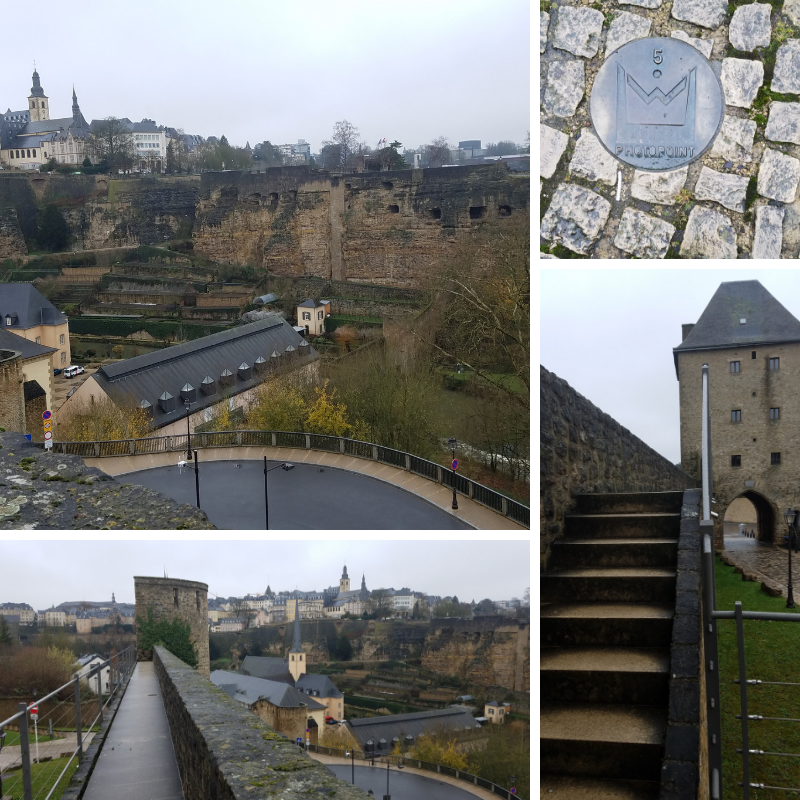 While I stood on top of the wall, bells started to ring! It was breathtaking to stand there, look at that view and hear the bells ringing. Thankfully, I thought to record it, so I could share the experience. Enjoy!

From here, I climbed down and crossed over the Stierchen Bridge. Spanning the Alzette River, the bridge led me over to the Bock Promontory. But first, I stopped on the bridge and just after to enjoy the views. 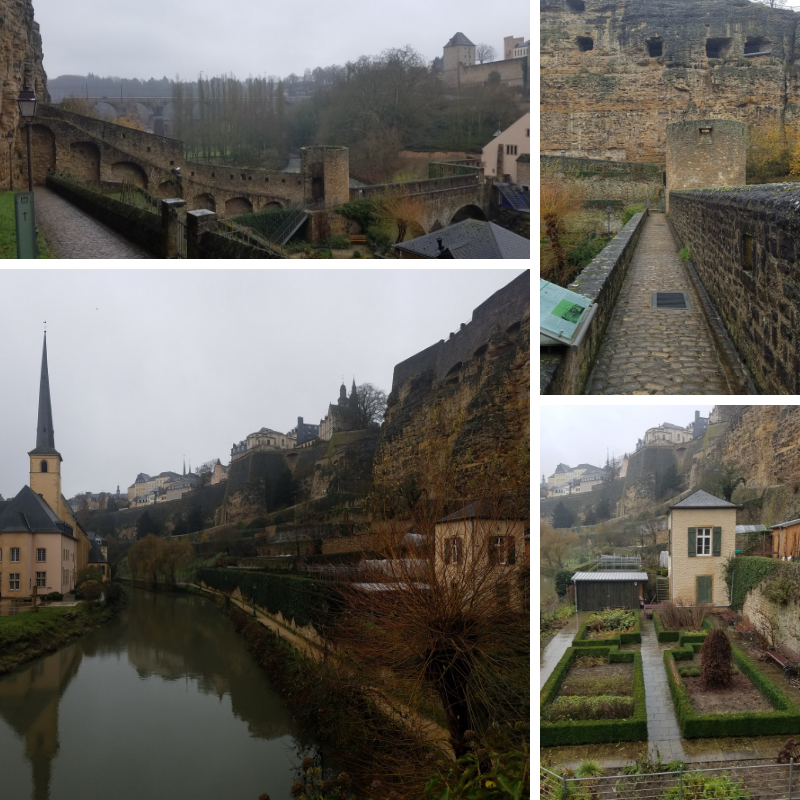 Now I stood at the Grund Gate and Bock Promontory. This is the site of Count Sigfried’s castle, built in 963! His castle was the basis for the town that became Luxembourg. For hundreds of years – until the Treaty of London in 1863 – this area was attacked and reinforced multiple times. (You can visit the ruins of the castle, including its underground passages, although I passed on that this visit.) 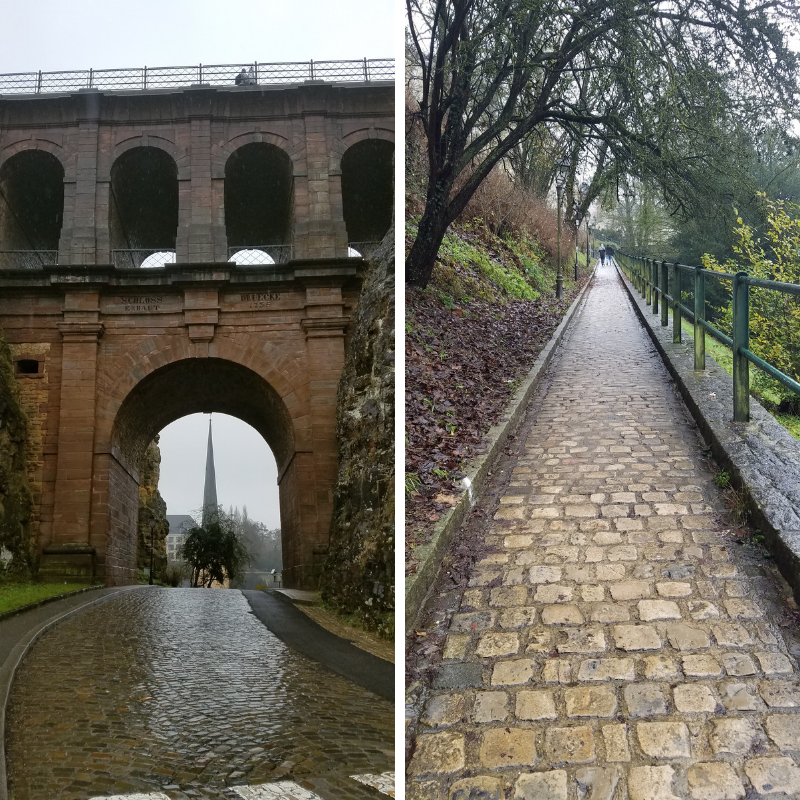 From the top, I had more stunning views of Luxembourg. 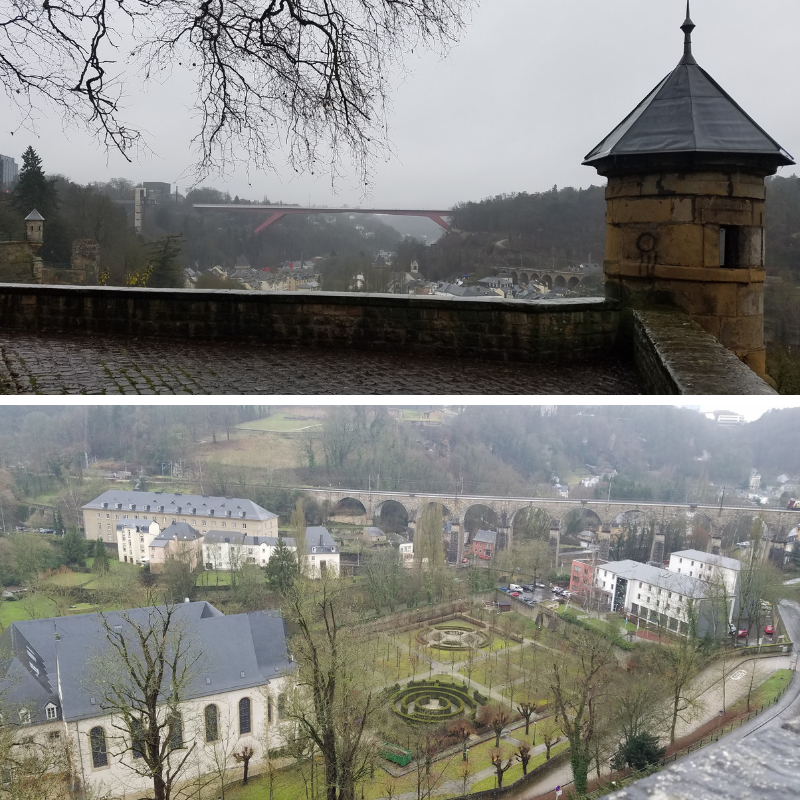 And, on the other side, looked back at the area I just walked through. On the bottom photo, in the upper left is Jacob’s Tower, where I stood and heard the bells ringing. In the center bottom of the same photo is the beginning of the Stierchen Bridge that crosses the Alzette River. 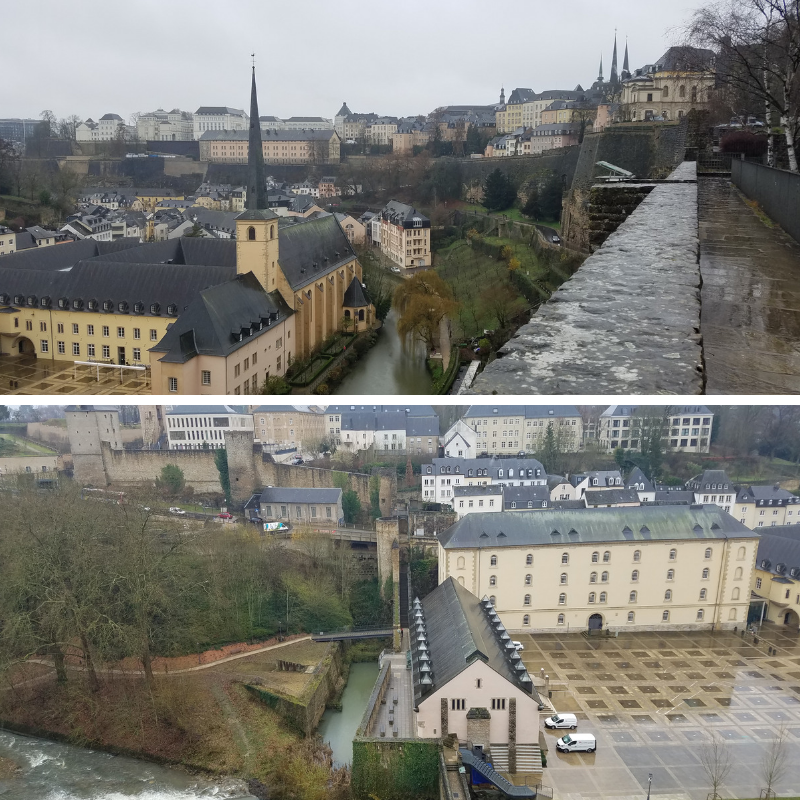 As I started to walk back to the city, I found the UNESCO World Heritage Marker for this area and took one last view of everything. 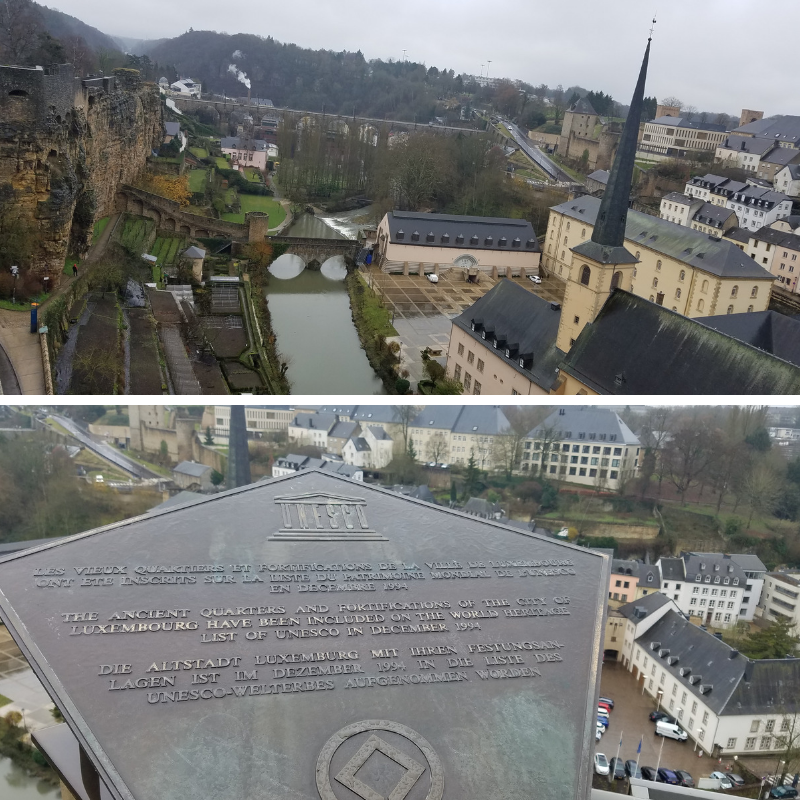 As I returned to the city proper, I was regaled again by the cobblestone streets and majestic architecture of the city. 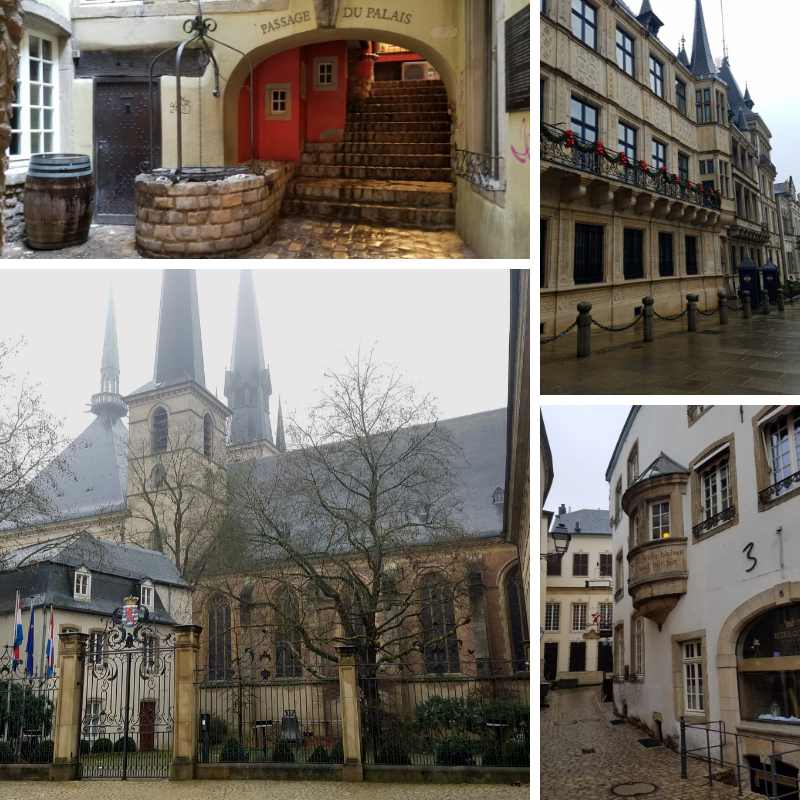 Along my walk, I found the Place Clairefontaine, in which stands the Grand Duchess Charlotte statue and a more modern statue in front of the Clairefontaine Gallerie. Again, as you walk thru the city, don’t forget to look up cause you might just find this quirky guy (bottom right) staring down at you! 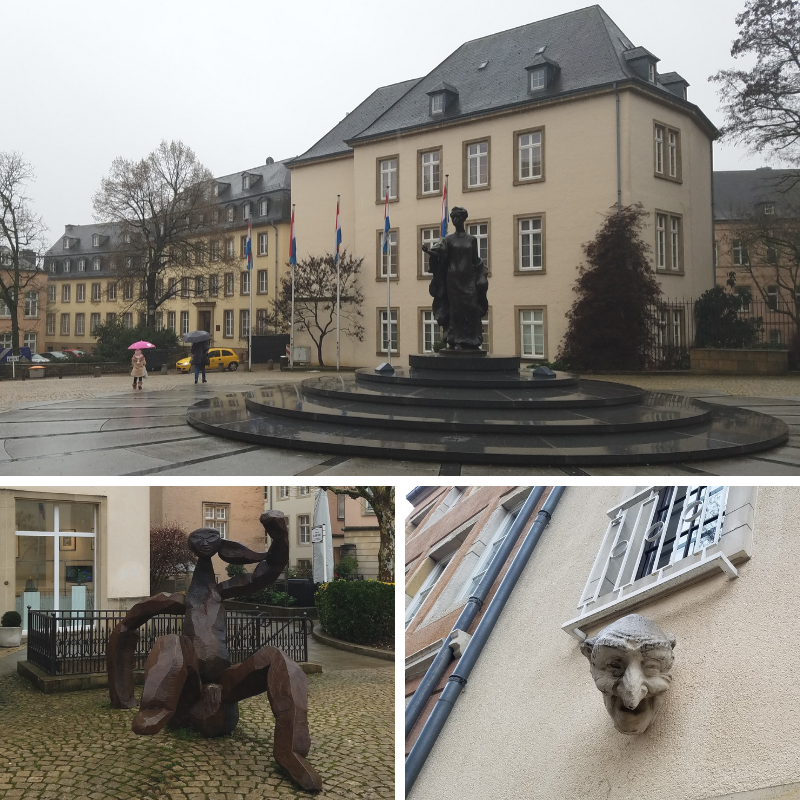 Chocolate House of Luxembourg by Nathalie Bonn
Cost: $10 (varies based on selection)

Last, but definitely not least! My final stop in Luxembourg is at the Chocolate House Bonn. Housed in one of the older buildings in Luxembourg and across from the Grand Ducal Palace, is this hot chocolate cafe. With shelves and shelves of different flavored chocolate spoons, you can make whatever flavor of hot chocolate you desire, then sit upstairs (on a rainy day) or outside to sip your treat and rest your soul – or, soles if you’ve been sightseeing all day! 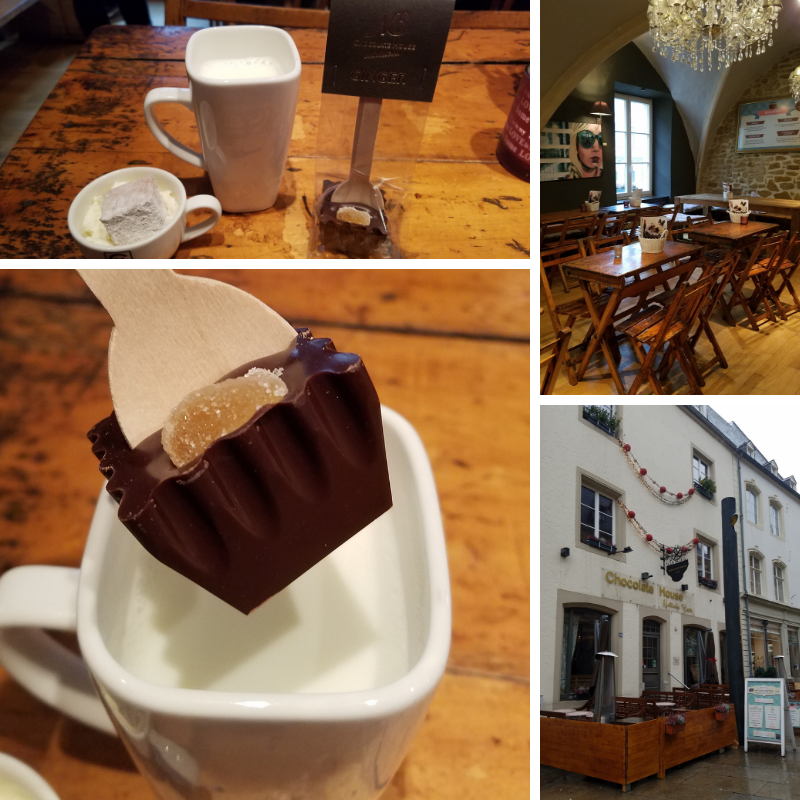 I stayed at the Park Inn by Radisson which was walking distance from the train station and from the Old Town area of the city I visited. The room was comfortable and spacious. I was a few floors up so although it’s in the middle of the city, the noise at night wasn’t too noticeable. They served a generous breakfast buffet where I found a delightful cheese-filled pastry I thoroughly enjoyed! 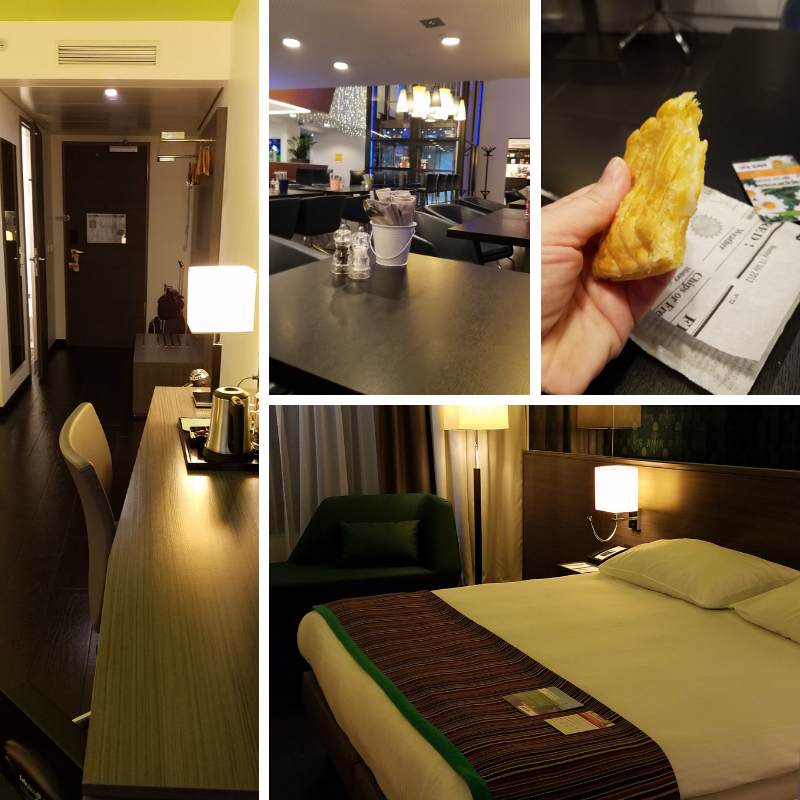 The budget for my 2-day Luxembourg Holiday came to a total of $207: 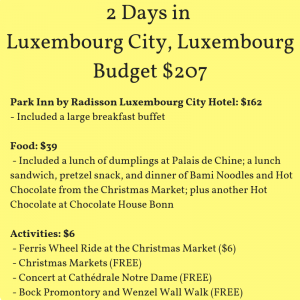 My budget has been translated to USD, based on my final credit card charge or a google conversion where I paid in cash. 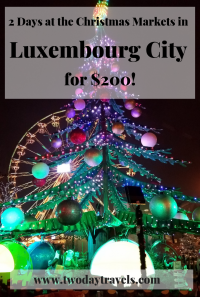 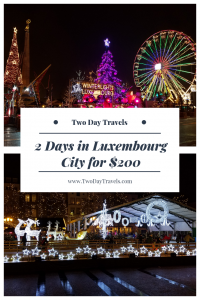 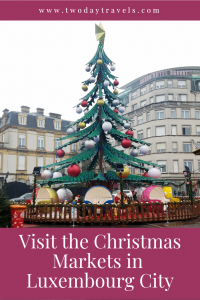 All links are for your convenience only, I am not an affiliate of any company and do not make money off recommending them. I just want to make it easy for you to find them if you’re interested.