A 2 Day Train Ride on the Coast Starlight for $200

I’ve been seeing quite a bit on social media recently about inexpensive train rides across the United States, so I decided to check out one of them. The Coast Starlight is a route going between Los Angeles and Seattle, that takes just under 2 days, one way. I started my ride at Union Station in Los Angeles. I got here a little early to walk around the historic building. About 30 minutes before departure they opened the counter to hand out seat assignments, and 15-20 minutes later they announced the track number, so we all headed outside to wait for the train and board. 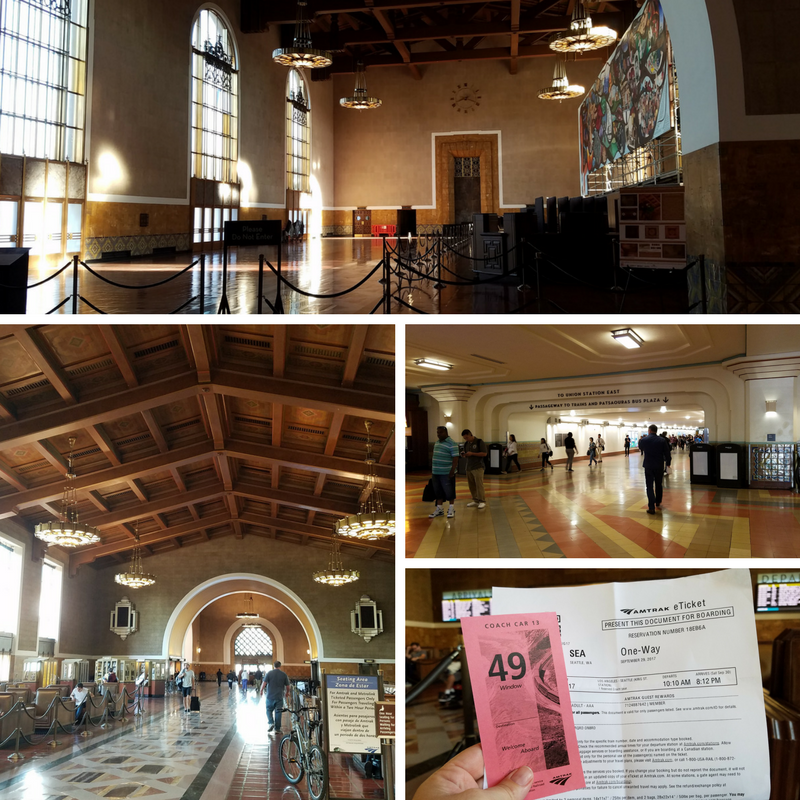 Since I was specifically trying to stay on a 2 Day Travels budget of $200, I bought a coach seat. It was more comfortable than most coach class airline seats and I was very lucky that most of the trip I didn’t have anyone in the seat next to me, but I think that was just due to not having a full train.  There were a few people that came and went from the seat next to me throughout the night. I will admit that it was a little awkward to sleep next to a stranger because unlike airline seats, there aren’t any middle armrests so, measly as it may be, there wasn’t anything separating you from the person next to you. On the first day of our trip, our car had the unfortunate experience of enduring a gentleman who got on the train in Los Angeles, already drunk at 10 am, who continued drinking throughout the ride. He was annoying from the start and got progressively more disruptive as the day wore on. It reached a point that some of us in the car went and alerted train personnel. To their credit, they immediately addressed the situation and eventually removed him from the train, leaving him with station personnel to handle his situation. 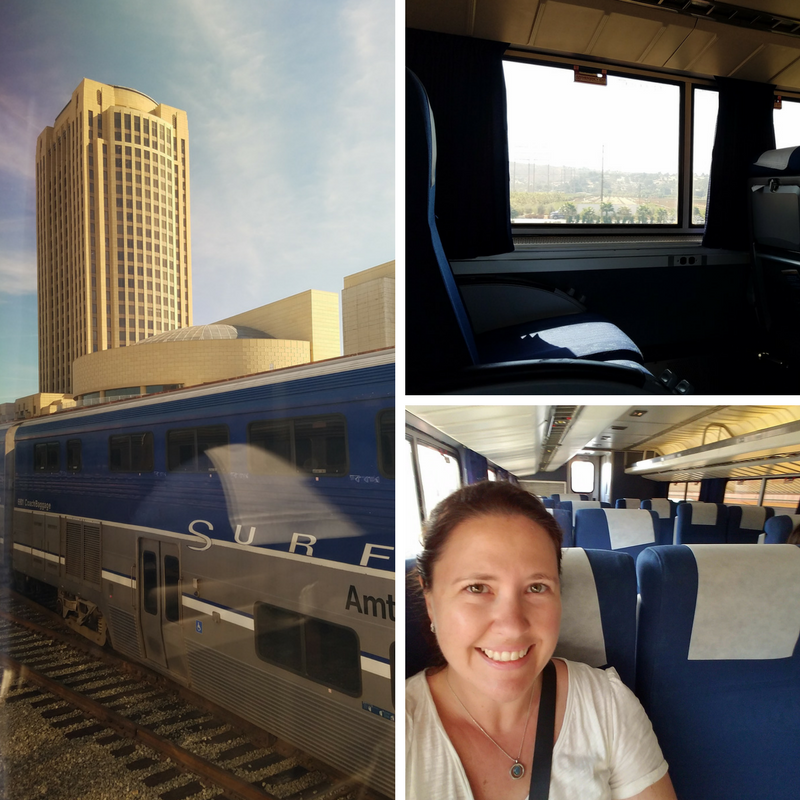 There was some Wi-Fi access on the train, but it wasn’t great, so I mostly just used my phone for internet (texts and emails), and my tablet for (preloaded) movies and ebooks after dark when nothing could be seen. Otherwise, the majority of my trip was an opportunity to just stare out the window and I loved that! Much of California is fairly brown in summer and fall, and that’s certainly reflected in the landscape for the first part of the trip. But even so, it’s a pretty spectacular part of the country to see. We do follow the coastline from Los Angeles to Santa Barbara but, despite the train route’s name, most of the trip is actually inland. 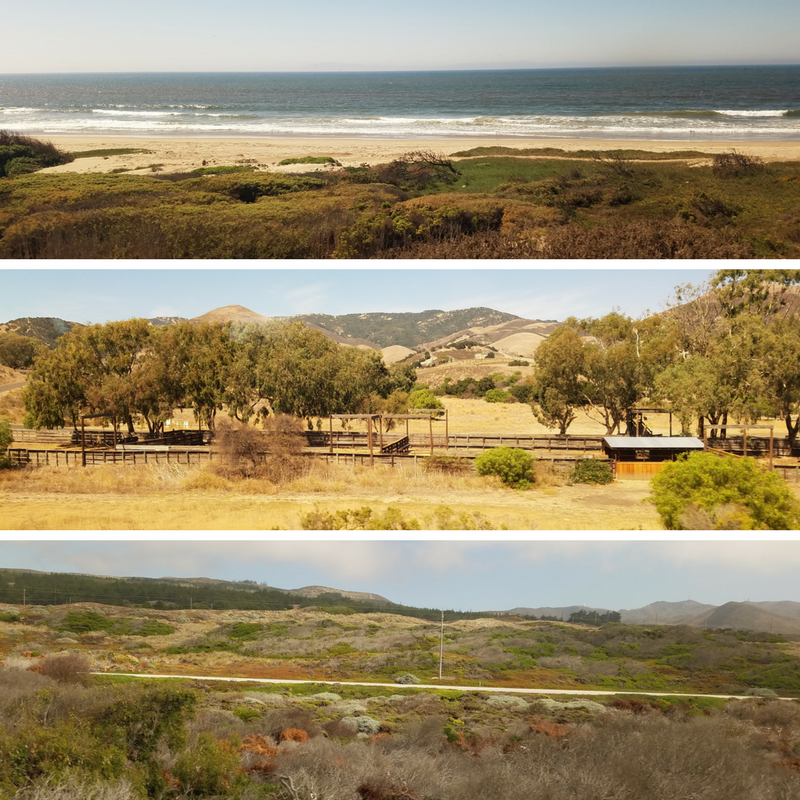 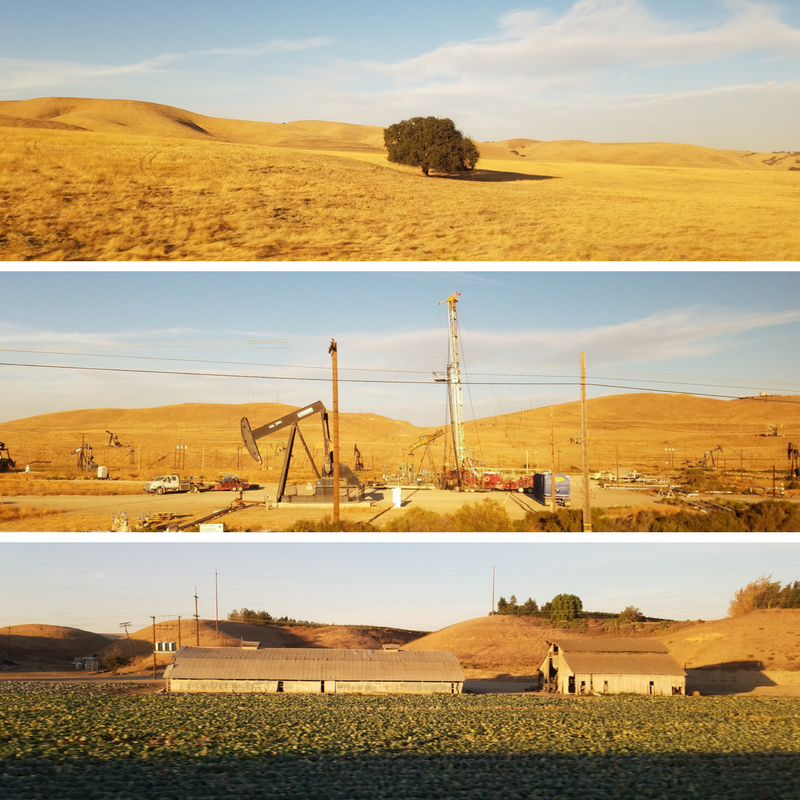 The Coast Starlight has both a dining car (by reservation, shared tables with other guests) and Cafe Counter (coffee/premade sandwiches). I ate my lunches and dinner at the dining car and had some pleasurable conversations with the folks I met. Breakfast I just grabbed a microwaved Sausage, Egg & Cheese Muffin and coffee from the counter and ate at my seat. 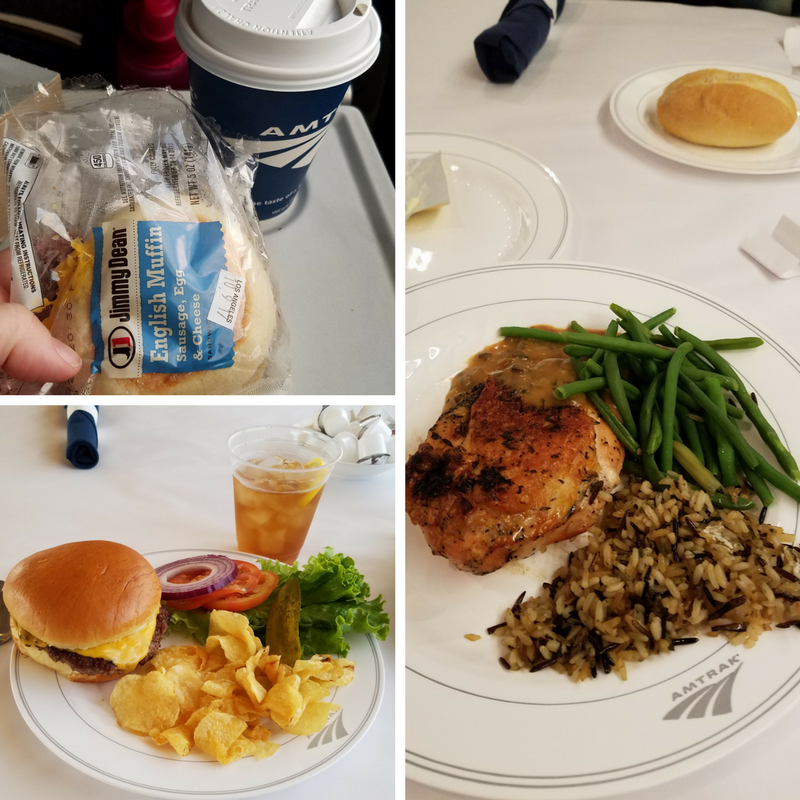 Most stops are just long enough to let people on/off at that particular stop, but there are some longer breaks where people can get off to stretch their legs, have a cigarette, or maybe even use a clean(er) bathroom if they’re one of the first ones off. (Highly recommended if you’re one of the first ones off because, by the 2nd day, the bathrooms were getting a little um… overused… ) But watch your time because the train waits for no one! 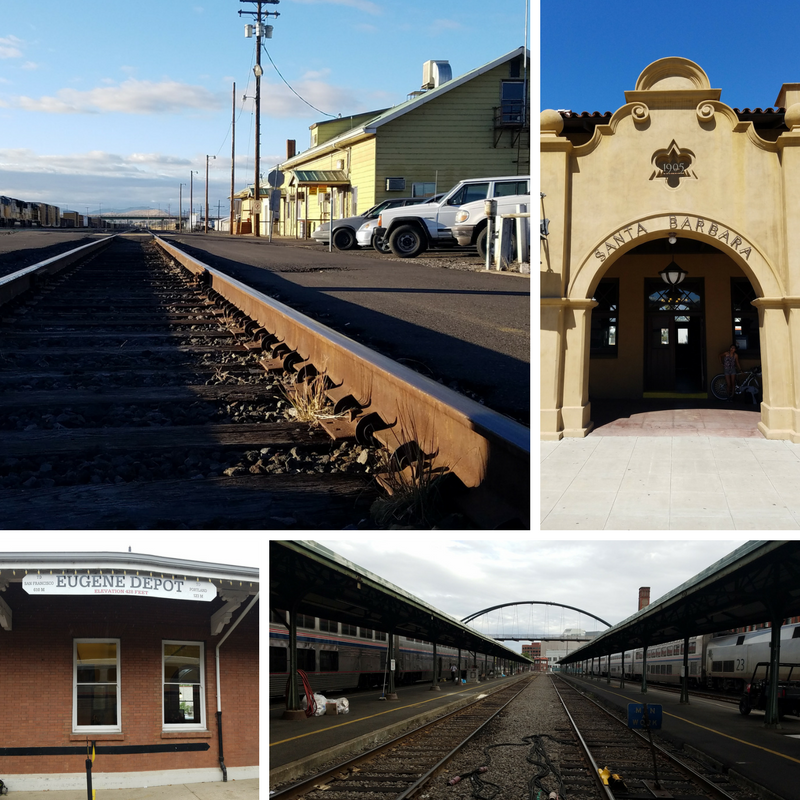 By morning we were in Oregon and the scenery was much different – mountains, lakes, and GREEN! Certainly more picturesque than the drier lands in California! I enjoyed the diversity of the scenery along this section of the route. 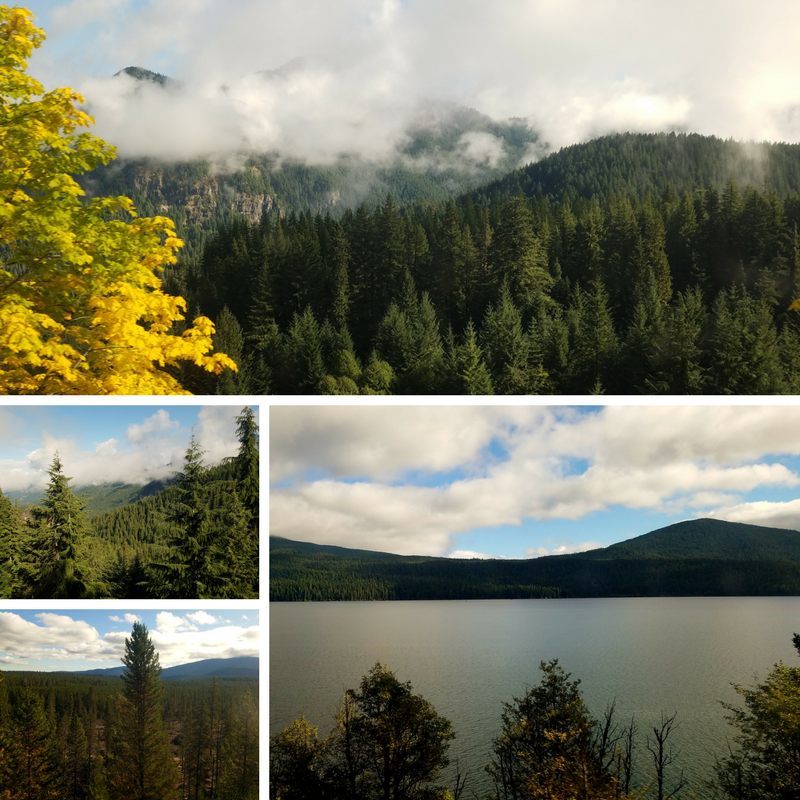 While I spent much of my time at my own window seat (complete with outlets for recharging my phone and tablet!), I also spent some time in the Observation Car where I could watch the scenery. The windows were bigger, and the seats slightly more comfortable. I never found it too crowded, but I suppose that again all depends on how full the train is. 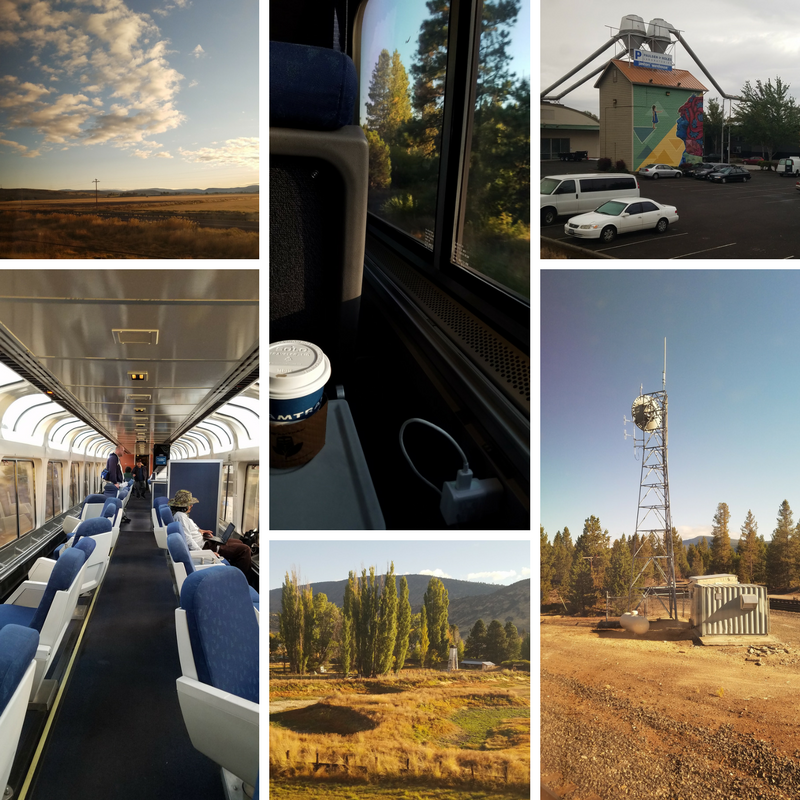 By the time we reached Washington state, the sun was beginning to set and I enjoyed watching a beautiful sunset over the water. 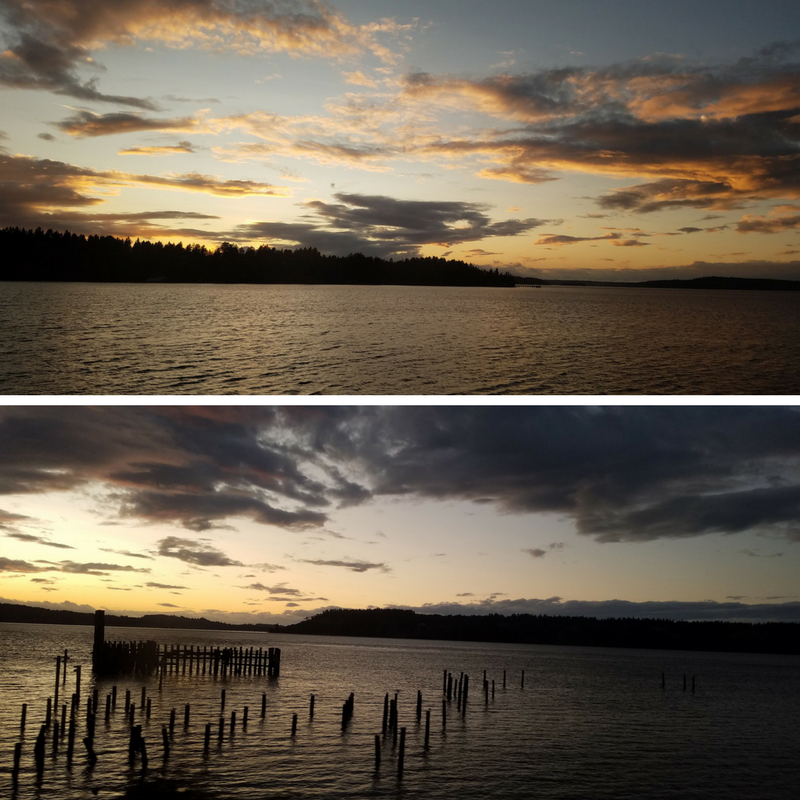 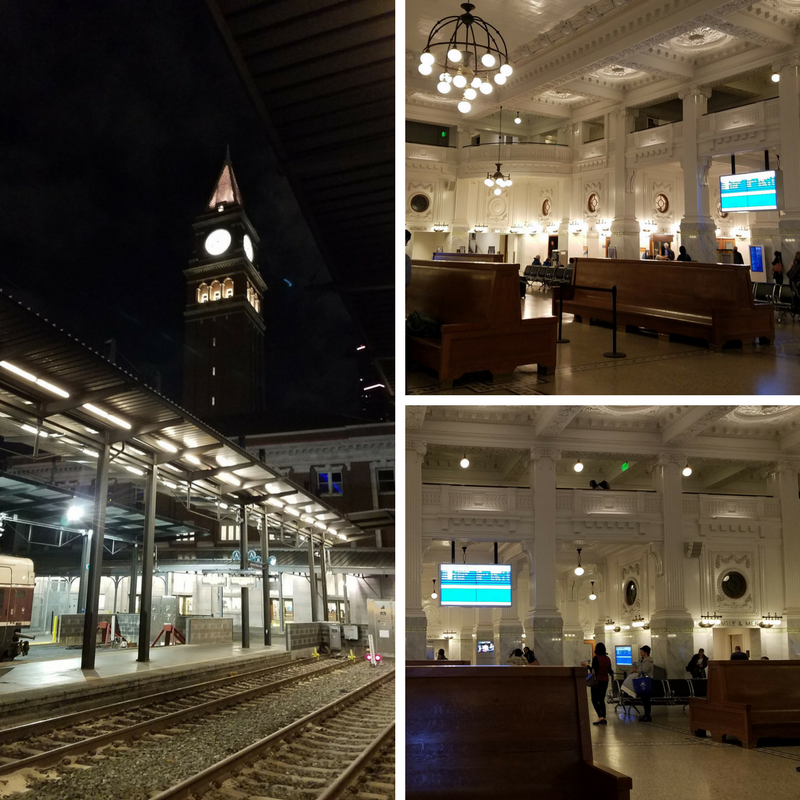 If I were to take a train like this again,  I might consider getting a private roomette and use it as an opportunity to decompress – read, do some writing, or just zone out while staring out the window and watching the scenery roll by. The Budget and a Partial Itinerary (not all cities/times listed, just a representation of the stops) are fairly straightforward. I brought my own water bottle to have along the ride (there are water stations in each car) but otherwise bought all my meals onboard. 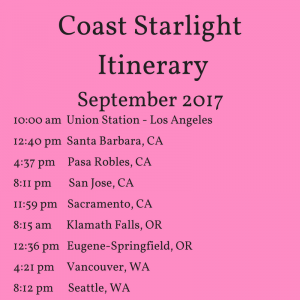 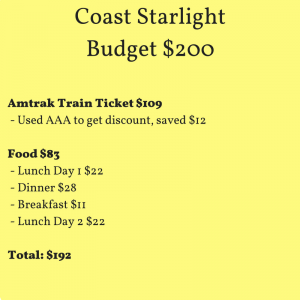 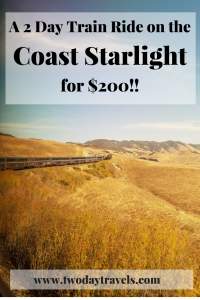 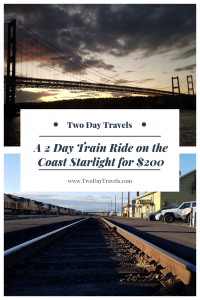 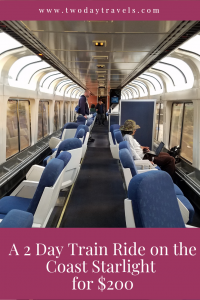 Have you ever taken the train? Tell me about your favorite train ride experience!