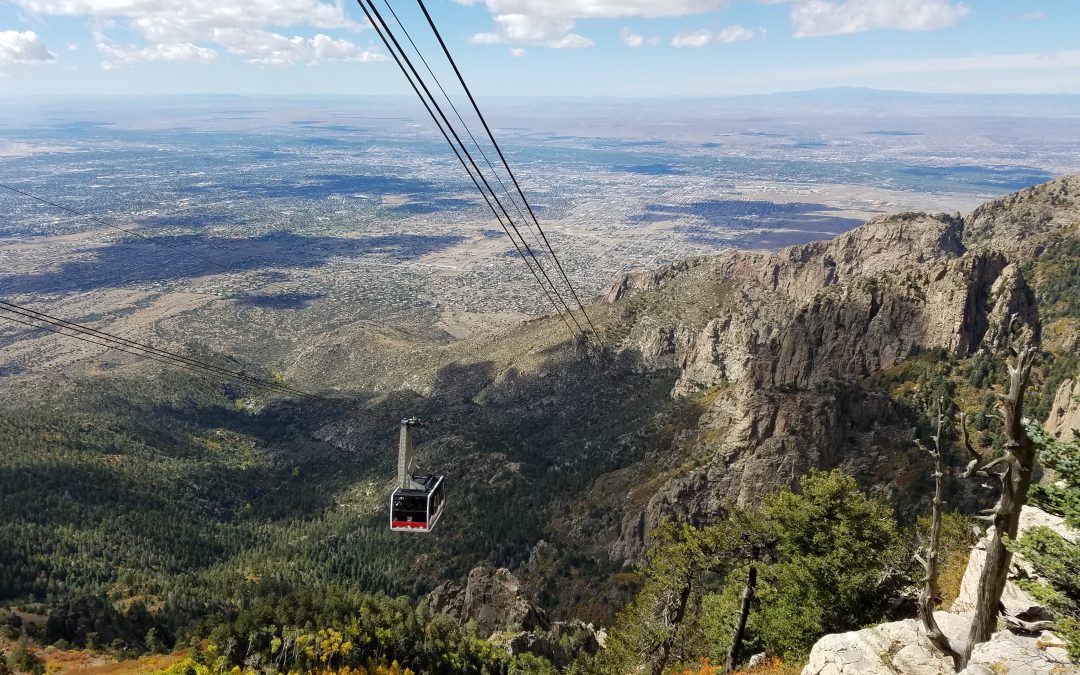 While it’s the biggest, most populous city in New Mexico, Albuquerque is very much an underrated travel destination. Although often overlooked, Albuquerque is filled with so much to see and do. There are so many different historical, cultural, foodie, and outdoor activities here you can keep everyone in your group happy!

If you’re looking for some ideas of what to see in Albuquerque, read on for my suggestions to help you start planning your Albuquerque itinerary!

This trip was inspired by the idea of seeing the Albuquerque International Balloon Fiesta one of the biggest hot air balloon celebrations in the United States that happens every fall in early October. It was an absolutely stunning experience and I was in awe of the colors and designs and sheer multitude of hot air balloons. It was incredible to walk amongst the balloons in the field as they were inflating and stand right next to them as they ascended into the sky. You can see read about my experience in depth and see many more photos in my gallery at Albuquerque Balloon Fiesta.

I purchased Park ‘n Ride Tickets for 2 sessions (morning + evening) that provided free parking (for those with cars), a shuttle to the fiesta, and entrance to the park.

The Dawn Patrol and Morning Glow sessions start v-e-r-y early and it’s recommended to get there between 4:30 and 5:00 am to be ready for the extravaganza! After the early morning Opening Ceremony, the hot air balloons start their Mass Ascension into the sky. It was such an incredible experience to watch! It’s definitely an event I won’t ever forget and this remains one of my most favorite Two Day Travel experiences to date! 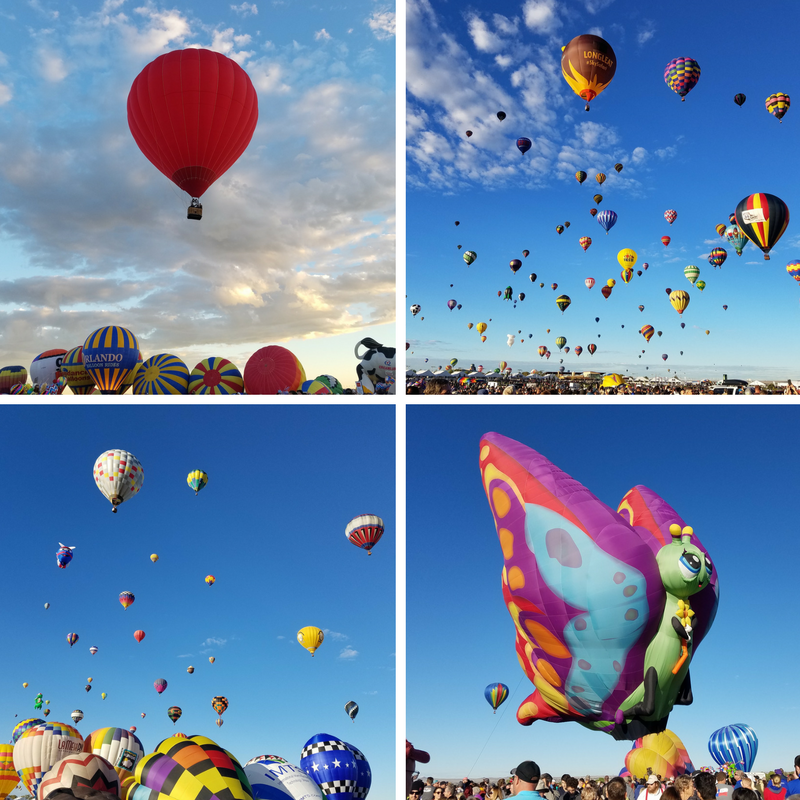 There is a block of time between the morning and evening sessions, so in between I did some exploring around Albuquerque.

One of the more popular areas in Albuquerque is Old Town. The city originated here in 1706 and built itself around a central plaza that is now home to a variety of shops, galleries, and restaurants.

The Old Town Plaza includes a bandstand and a display of two replica Mountain Howitzers. During the Civil War, the Confederates buried eight howitzers in the area to hide them from the Union soldiers. Those guns were rediscovered in 1889 and two of them now reside in the Albuquerque Museum of Art in History. 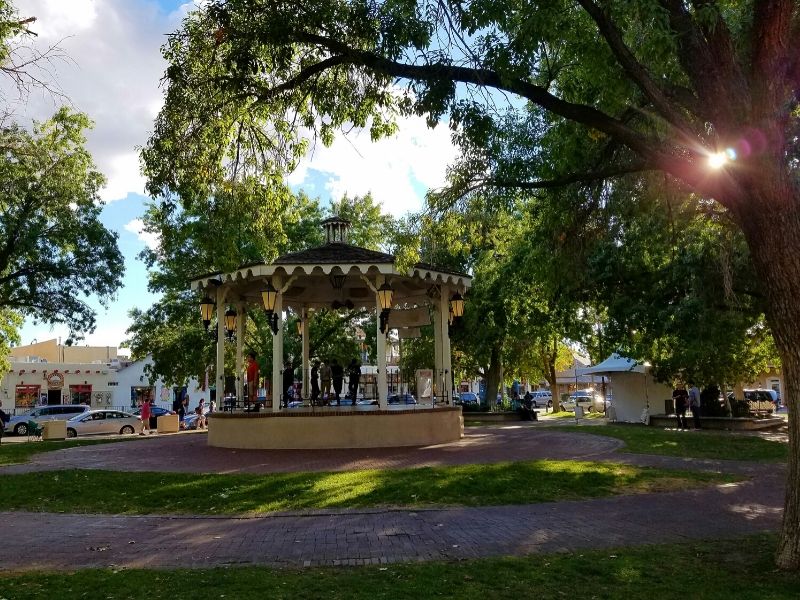 On the north side of Old Town Plaza stands one of the oldest surviving buildings in the city,San Felipe de Neri Church, a Catholic Church that has been in continuous use for over 200 years. It was built in 1793 to replace an older church that had collapsed the winter of 1792-1793.  Franciscan Missionaries ran the church until 1817. The Church grounds include several buildings including a rectory, Our Lady of Angels School, Sister Blandina Convent (built in 1881 and said to be first 2-story building in town), and various outbuildings including a barn, stable, and parish hall. 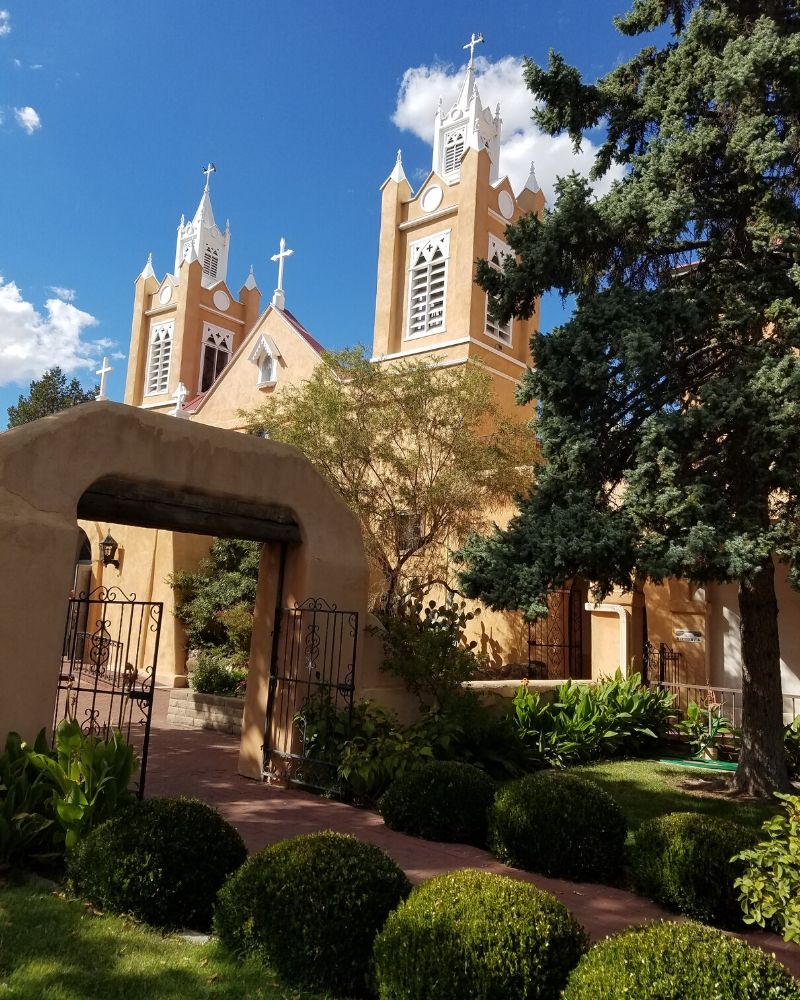 As an aside: when I was doing research about the church, I started reading about Sister Blandina who is an absolutely fabulous woman. She is known for her missionary work on the American frontier, advocating on behalf of the Hispanic and Native American populations and her encounters with Billy the Kidd. The Roman Catholic Church has opened a process for Sister Blandina to be canonized and she is the first person in New Mexico’s history to have that honor. I wanted to learn more about her experience, so purchased At the End of the Santa Fe Trail, a collection of letters written between her and her sister. If you’re interested in reading along drop me a note and we can compare our thoughts on her memoir!

One of the more popular Mexican restaurants in Albuquerque is the Casa de Ruiz Church Street Café. The family house “Casa de Ruiz” was built during the founding of Albuquerque in 1706 and is one of the oldest structures in Albuquerque. Originally built by the Ruiz family, the house remained their family residence through multiple generations, until the last inhabitant, Rufina Ruiz died in 1991 at the age of 91! Now it serves award winning salsas and their famous Rita Margarita to locals and tourists every day of the year. 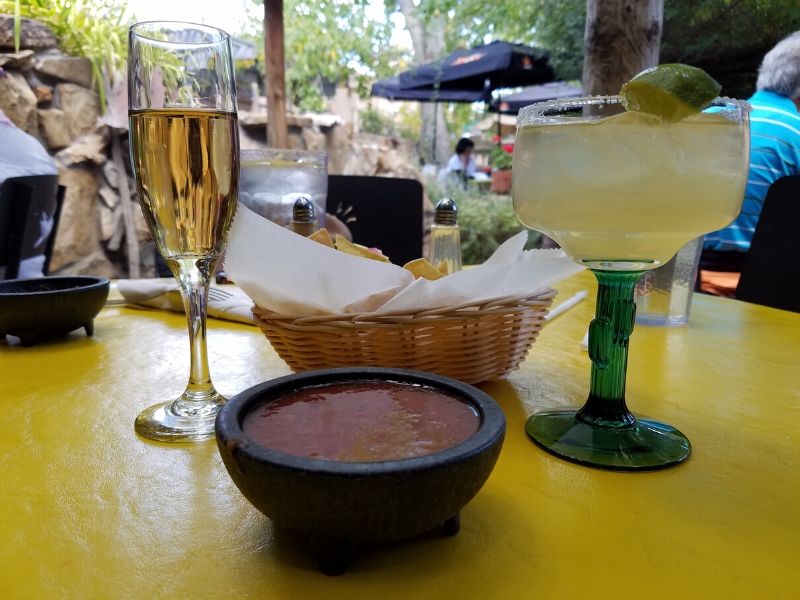 The Paseo del Bosque Trail is a 16-mile long system of paved trails along the Rio Grande River through the Rio Grande’s Cottonwood Bosque (forest). The trails are open to bikes, pedestrians, equestrians, and are also wheelchair accessible.

There are multiple access points along the trail. Where I entered, near the Central Ave Bridget you’ll find parking spots with picnic tables nearby and walking trails that will lead you right to the water’s edge.

At the beginning of the trail is the steel sculpture “Cloud Chasers” by O.K. Harris, a long-time Albuquerque metalworking artist. 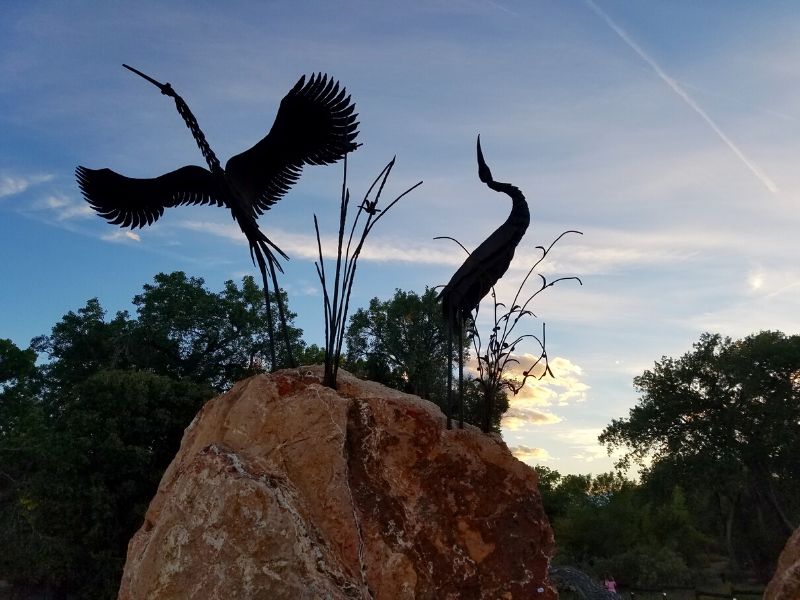 From there, just follow the easy dirt trails to the waters edge and enjoy the beautiful views! 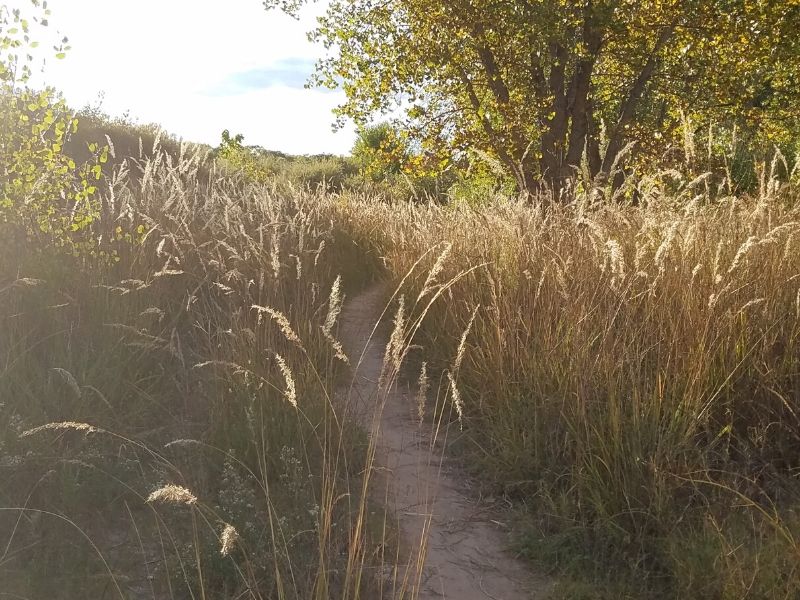 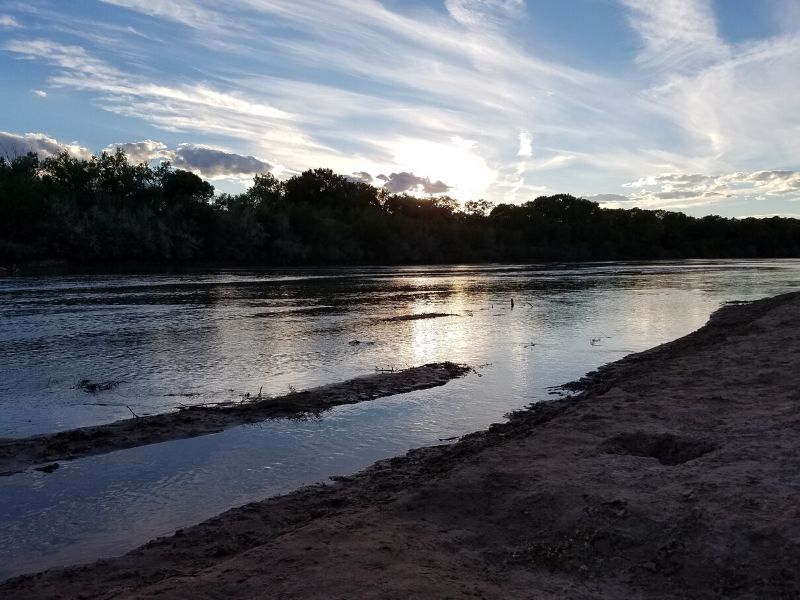 After a sunset visit to the Rio Grande River, I headed back to the Albuquerque Balloon Fiesta for the Twinkle Twinkle Glow session where the balloons light up in time to the music and play off each other. The evening was capped off by the sparkly AfterGlow Fireworks show. 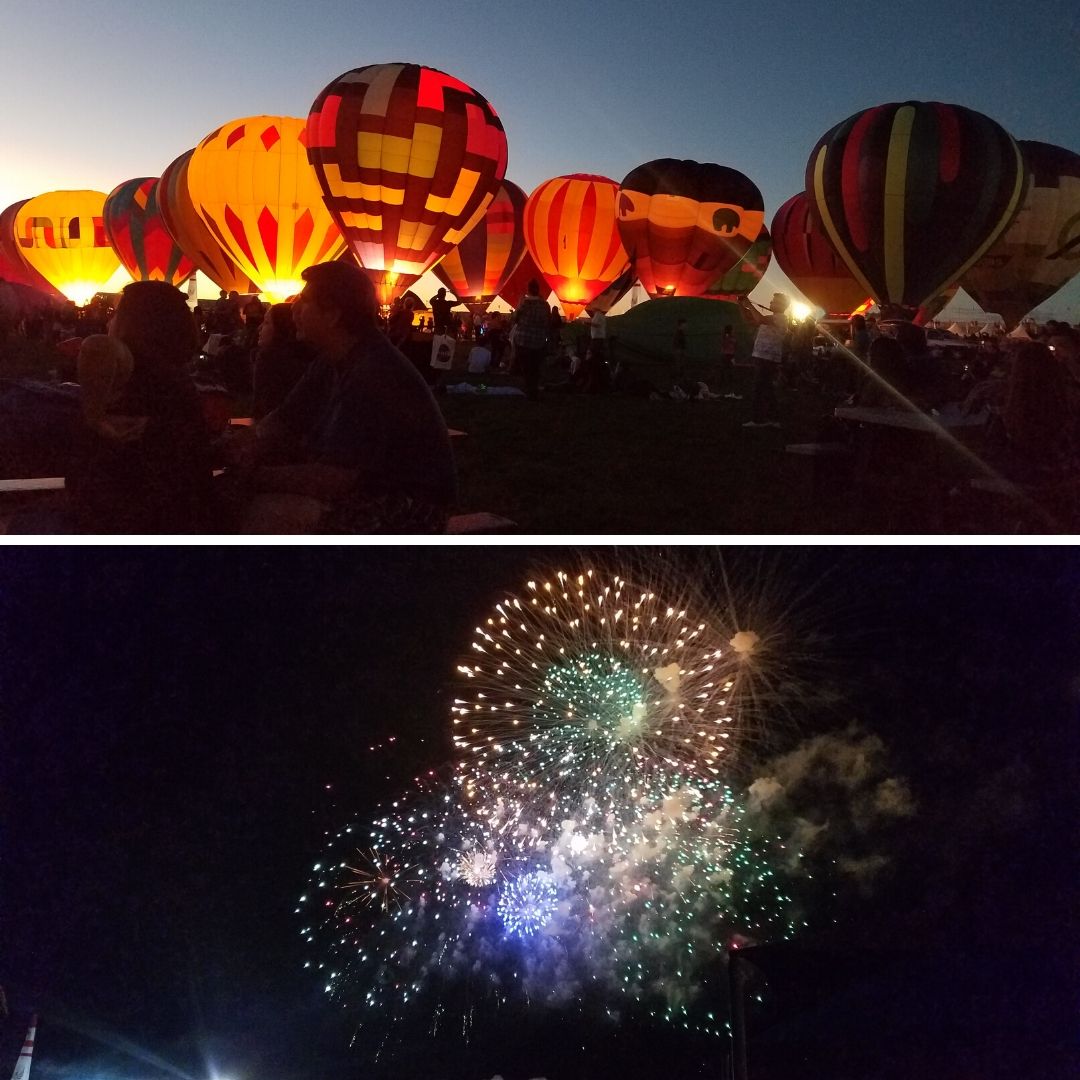 Albuquerque has a beautiful skyline, and one of the best places to view it is from the top of Sandia Peak. At 10,378′ above sea level, the best way to get to the top is via the Sandia Tramway. The Tramway is the longest in the US and the 3rd longest in the world! 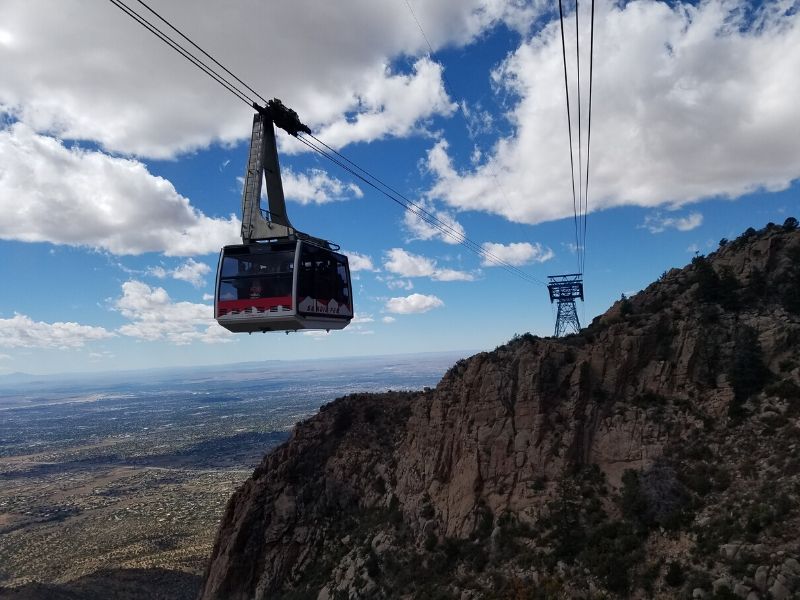 There are restaurants at both the lower terminal and at the top of the mountain if you want to get a bite to eat or enjoy a cocktail during your visit here. At the top of the peak, there are exhibits in the upper terminal highlighting the history and flora and fauna of the area. In addition, you can explore on one of the 100+ hiking trails or, in the winter enjoy some downhill skiing on their 25 miles of slopes and trails! 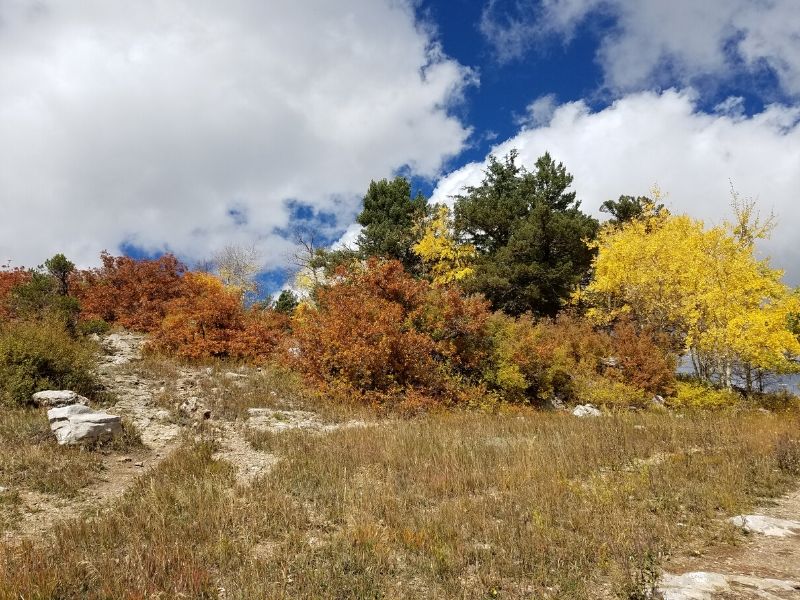 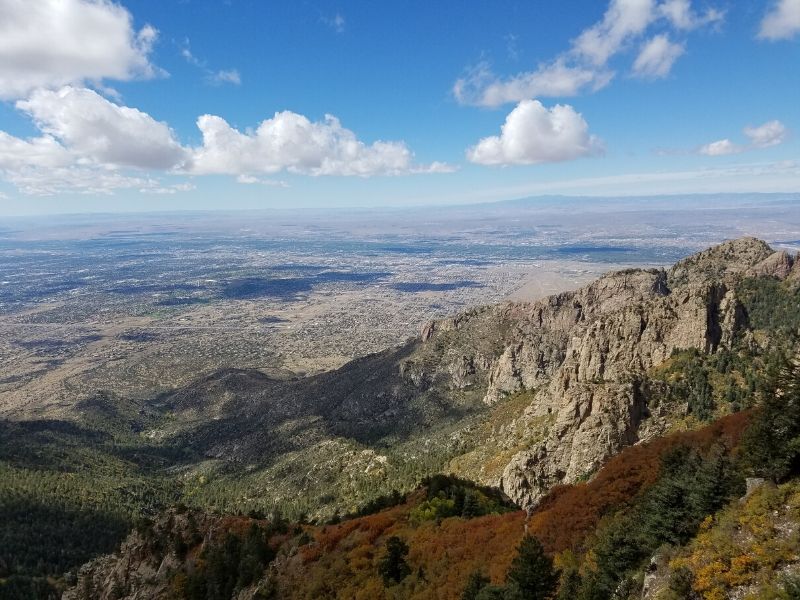 I may have been a little out of breath, walking around at 10,000 feet, but I definitely enjoyed that glorious view! 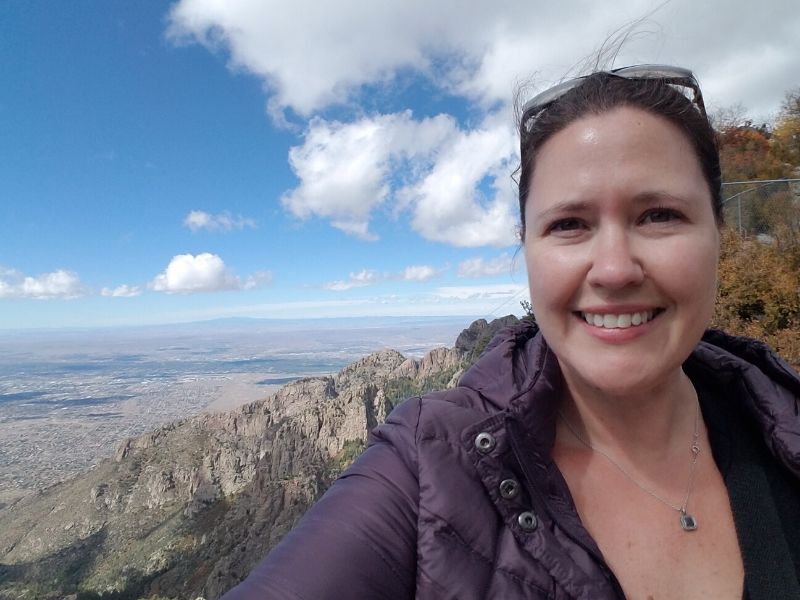 The Rail Yards Market is Albuquerque’s Farmer and Local Artisan’s market. It’s housed, as the name implies, at the old rail yards. The market itself is in the historic Blacksmith Building, and is home to some of Albuquerque’s finest food, farm, and artisan vendors, plus even live musical performances sometimes. The Rail Yards is open from 10am – 2pm Sundays May thru October. 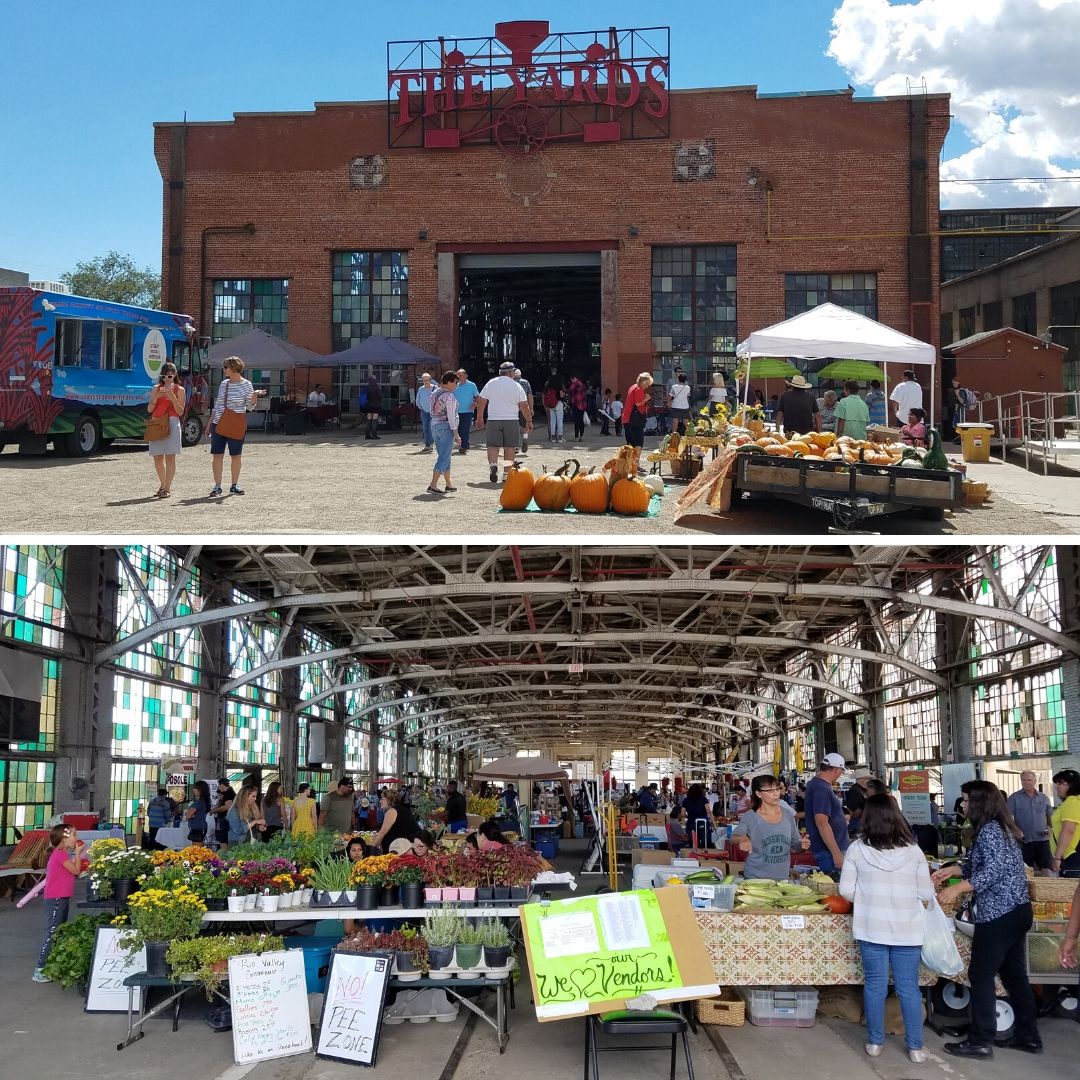 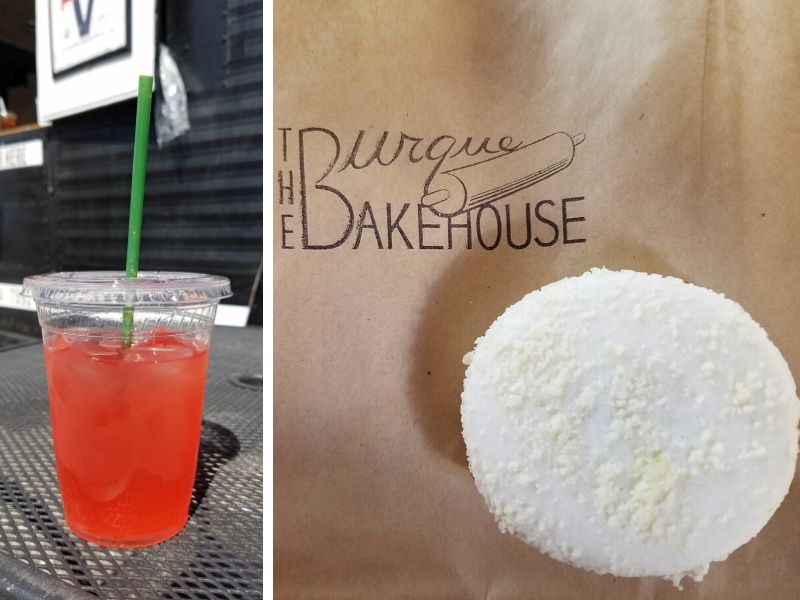 On the backside of the market, are some of the other still abandoned rail buildings directly behind it.  Old, abandoned buildings have always fascinated me – there’s a voice to these spaces that haven’t been touched in years and they have so much to say if we stop to listen to them. 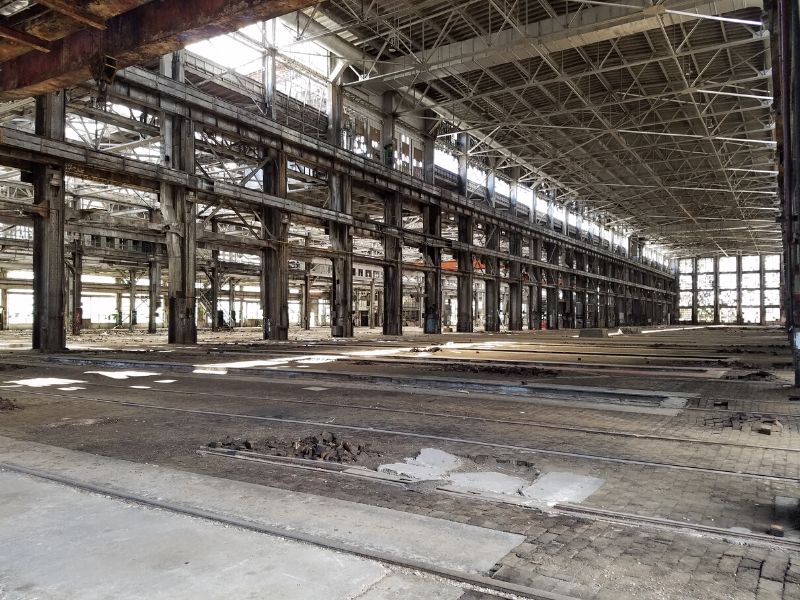 Route 66 runs right through the center of the city along Central Avenue through the Old Town, Downtown, Nob Hill & University areas. In the 1930s Route 66 was the only paved road crossing New Mexico and inspired a great deal of development alongside its path through the state.

If you’re interested in traveling along Route 66, read about my stop in San Bernardino, California
where I stayed at the WigWam Motel!

One of the more recognized buildings downtown is the KiMo Theater (423 Central Ave NW). This historic theater and picture palace was originally built for vaudeville acts. It opened September 19, 1927 and is an example of Pueblo Deco architecture. Pueblo Deco was popular in the early 20thcentury and is a combination of both Pueblo Revival (adobe construction with stucco walls, wooden beams, and earth tones) and Art Deco (combining modern styles of clean lines and rectangular forms with luxurious and rich materials). 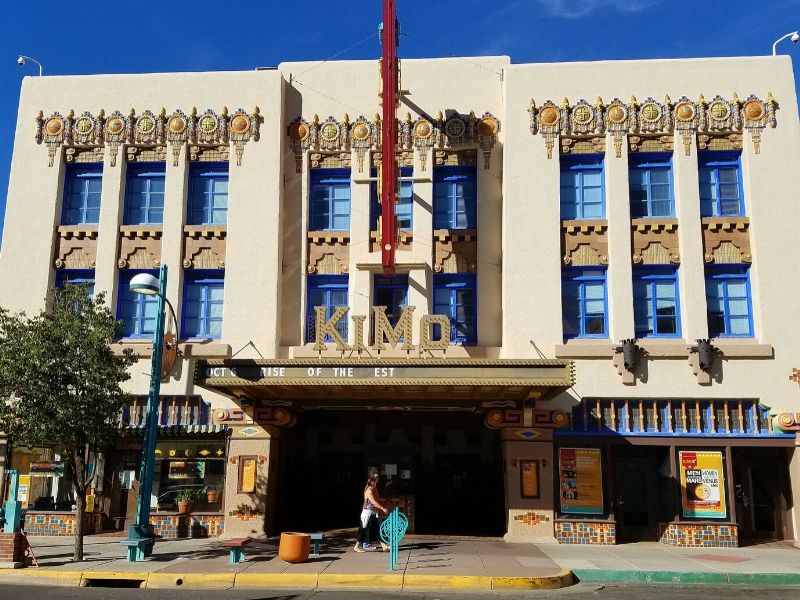 I found some really fun and different street art throughout the city. There are more than 100 public art installations in downtown Albuquerque, including murals, mosaics, and statues scattered throughout approximately a 12 block square area. This is just a small representation of some of my favorites. 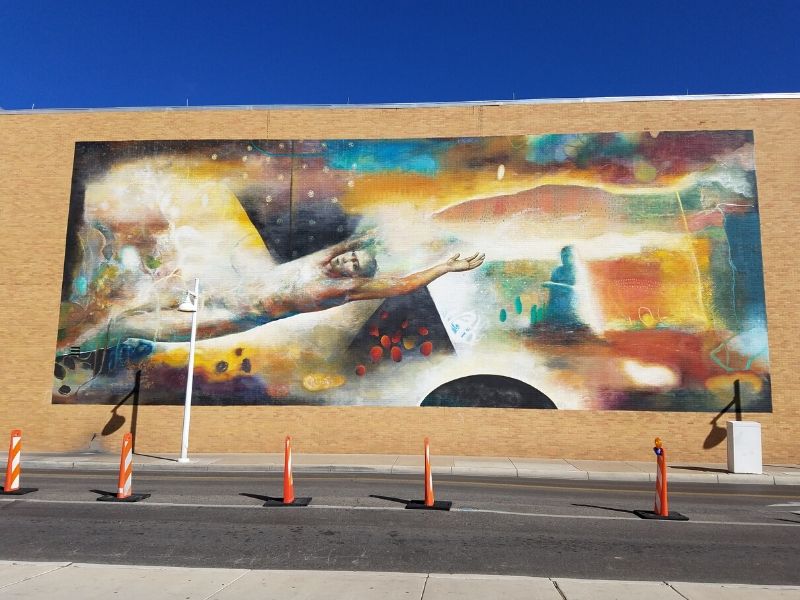 ”More than a Firefighter” Bas Relief Mural by PAZ (Patricio A. Zamora) at Fire Department Administrative Building (724 Silver Ave SW) made of acrylic and fiberglass. 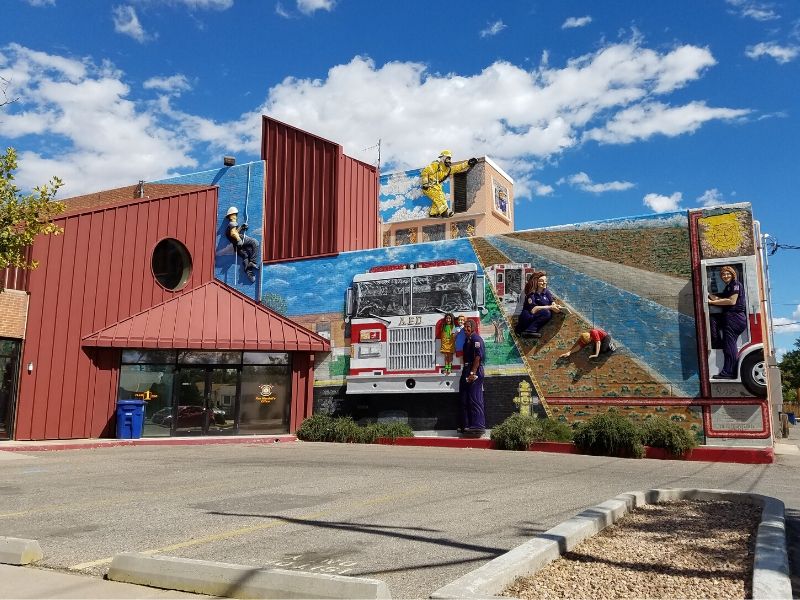 “Sin Un Pasado, No Hay Futuro” (Without a Past, There’s No Future) (Gold Ave between 2ndand 3rdStreet). I have not been able to find any information on the artist for this piece so if you know if it please contact me and I can update the post to include it! 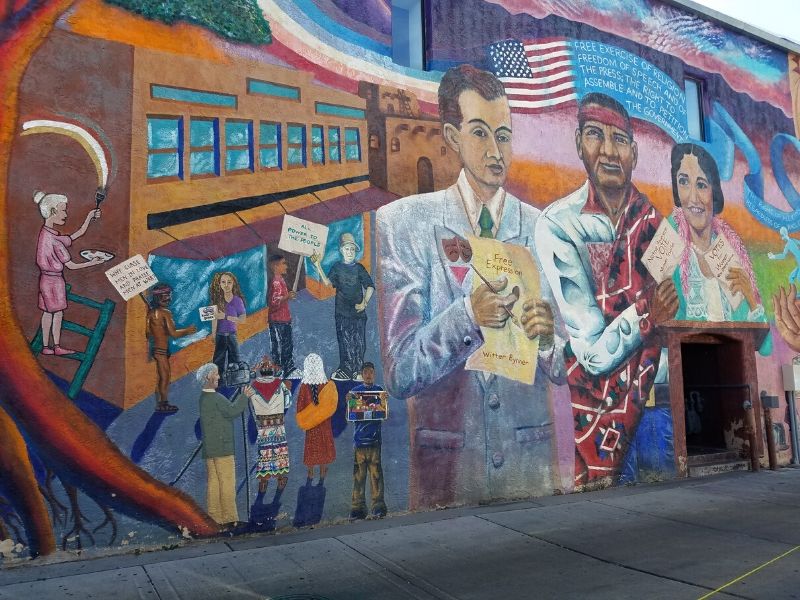 Totem of the Ancient Ones. Triptych mural by Thomas Christopher Haag (2ndstreet between Central and Gold Ave) next to Chamber of Commerce. 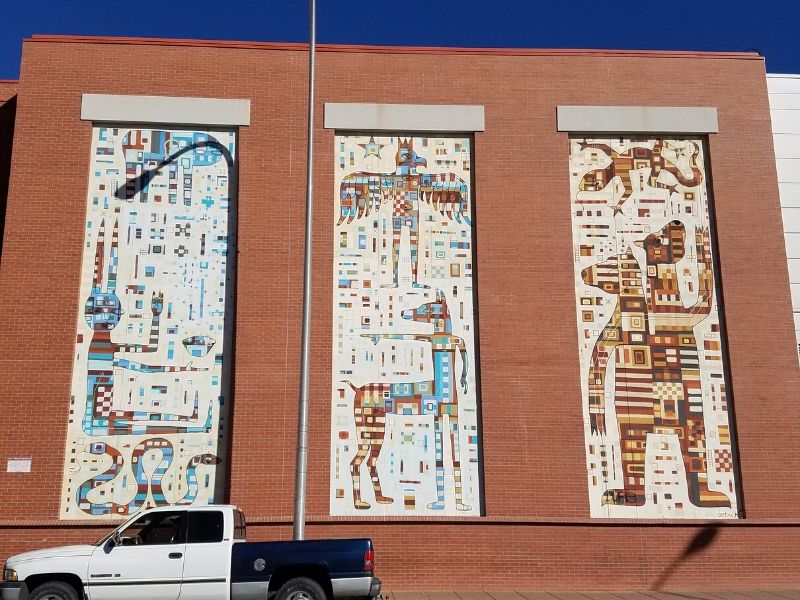 If you’re looking for a great steak restaurant in Albuquerque, then look no further than the Rancher’s Club of New Mexico. This award winning Albuquerque steak house is decorated with many artifacts and artwork that was donated by local, native New Mexican ranchers, giving it a very warm, authentic “Western Cowboy” vibe. Opened in 1985, they cook on a special gridiron grill that’s reminiscent of the old-style open range cooking of the Old West. Their filet mignon was simply amazing and one of the best steaks I’ve had. I paired it with the homemade macaroni & cheese, some broccoli and a glass of red wine. 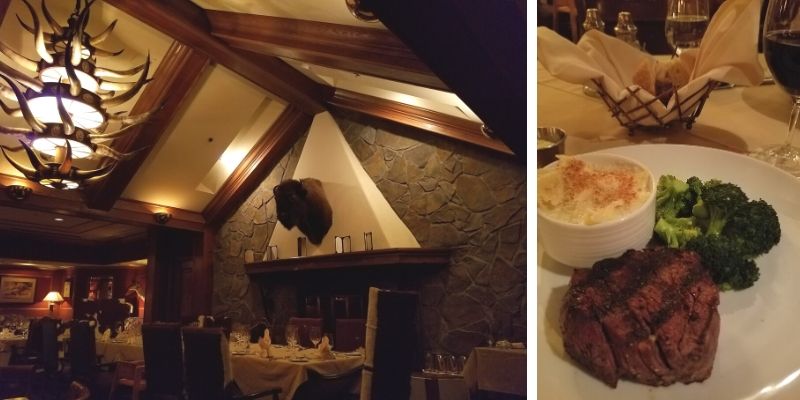 My final stop of the trip was at Nitro Fog Creamery in the Green Jeans Farmery restaurant and shopping complex. The fun thing about Green Jeans is it’s a unique indoor/outdoor area built entirely out of shipping containers! And, there’s a bicycle art installation in the parking lot that looks super cool.

Nitro Fog Creamery is a highly rated ice cream store that makes organic handcrafted ice cream with nitrogen right in front of you! Even better, they are an independent, family-owned business that sources their ingredients locally and uses compostable napkins, containers, and utensils. I thoroughly enjoyed every last bite of my delicious Almond Amaretto and Spiced Dark Chocolate Waffle Cone! 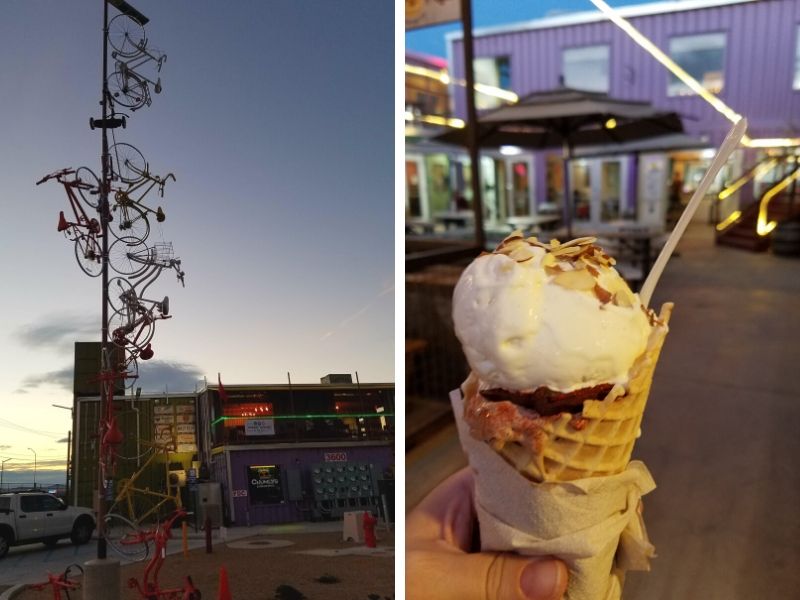 And how my budget came out for the weekend: 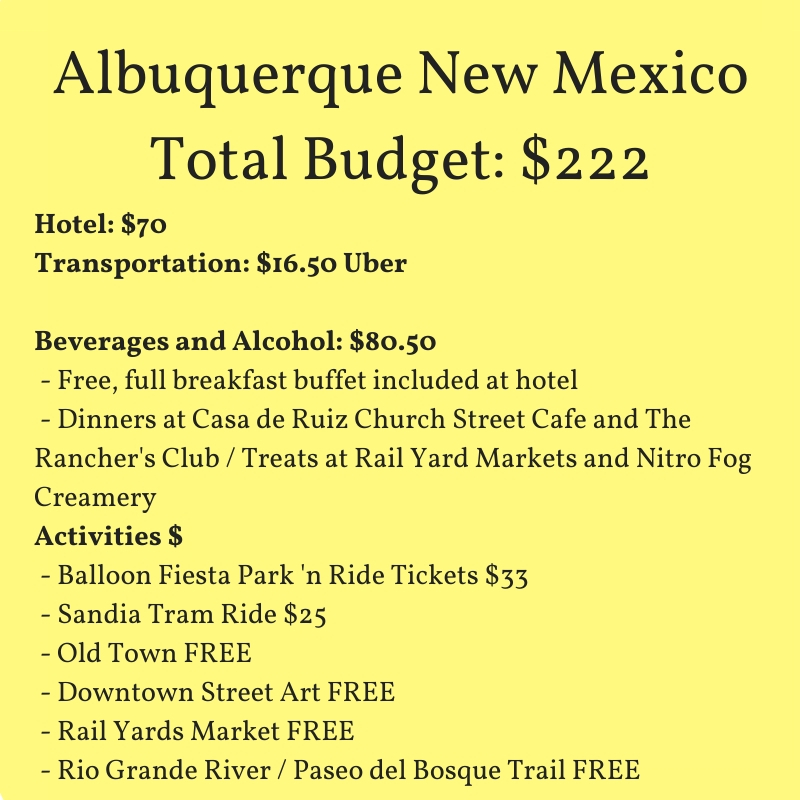 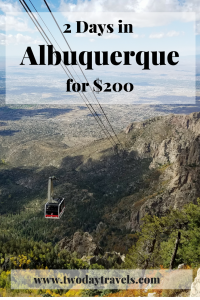 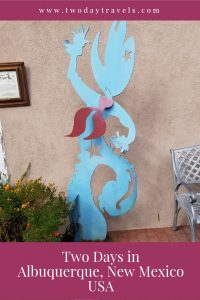 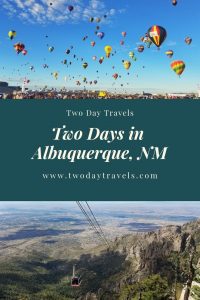