Two Days in Nashville for $200 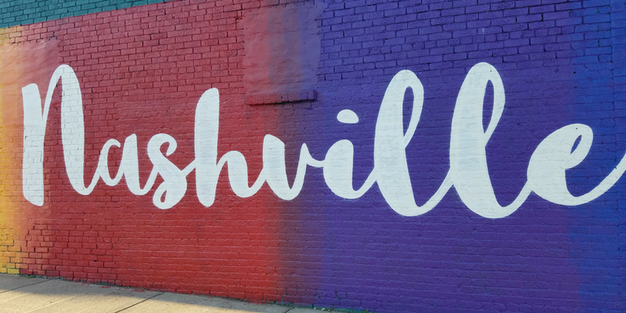 While I was in Tennessee last month,  I decided to sneak in an extra vacation and explore Nashville for a couple days! Take a look to see how I did it in 2 days and $200.

In Nashville, I decided to try one of the Hop On/Hop Off tours for my full day there: Old Town Trolley Tours. I found this to be a great way to see a lot of a town in just one day. It’s also an interesting way to hear about the history and culture of an area and get little pieces of advice about what to see at each of the stops. In Nashville, there are 15 different stops on this tour and I elected to get out to explore at 6 of them.
Cost: $38

One of my favorite stops along the trolley route was Tennessee Bicentennial Capitol Mall State Park. This gorgeous park opened June 1, 1996, to commemorate Tennessee’s 200th birthday! Along one side of the park is a timeline with pillars marking the year, and a ‘fence’ engraved with various facts of Tennessee’s history. At the south end, near the capital, is a 200′ wide map of Tennessee carved into the granite. A stunning World War II Memorial includes an 18-ton granite globe that sits on a layer of water and rotates! Along the eastern walkway are time capsules for each county that will be opened at Tennessee’s 300th birthday celebration. And on the north end is a court with 50 towers housing a 95-bell carillon that plays Tennessee-themed music at the top of every hour.
Cost: FREE 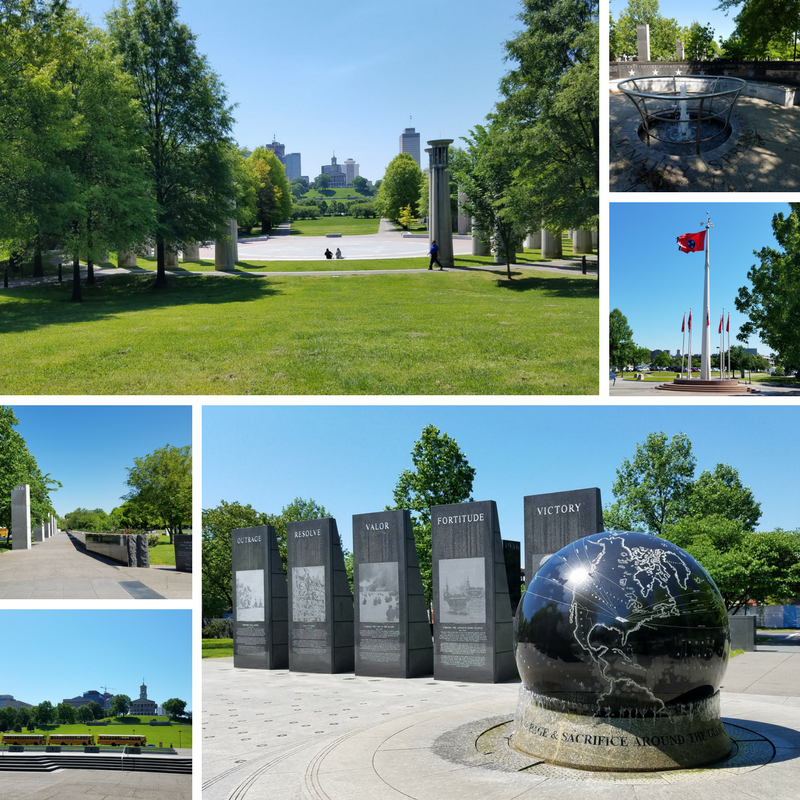 Marathon Motor Works was originally an automobile manufacturing company in Nashville. The buildings it once occupied now house stores and restaurants but keep some of the flavors of its original occupants. Truthfully, although somewhat interesting, this was probably the most “meh” of the stops for me and I wish I had skipped it and spent time at the Parthenon instead… 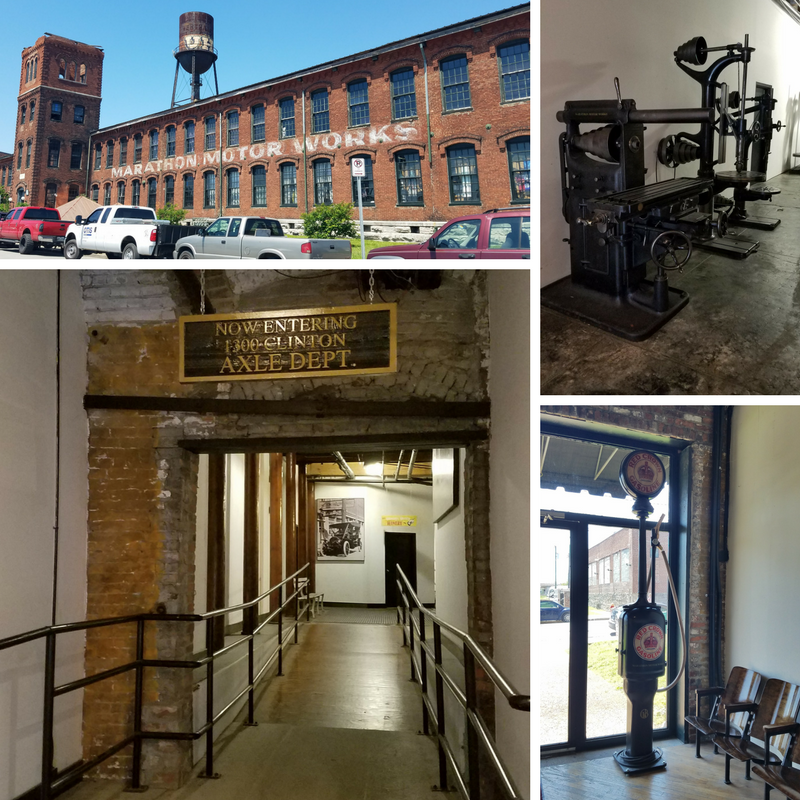 In the pictures here, besides one of the buses, you can see some of the stops along the way:
1) The Parthenon – an exact replica of the one in Athens, built in 1897 for the Tennessee Centennial Exposition. Although I originally intended to get out to explore the art museum that’s here, in the end, I was running out of time so will have to check it out next on another visit.
2) Farmer’s Market – this glorious building with walls of glass houses a fun food court inside and farmer’s market next to it.
3) Belmont Mansion – this is one place I did get out to explore and took the tour (Cost: $12). This was the country home for the wealthy Acklen family, built between 1849 and 1853. In included a 36 room mansion, an art gallery, bowling alley, lavish gardens, and even a zoo! The woman behind the house is Adelicia Hayes Franklin Acklen Cheatham. She was a cunning businesswoman of her day, outlived 2 husbands and moved to Washington DC when she was bored of the third! She managed an ever growing business portfolio as her first two husbands passed, and was at the forefront of using the prenuptial agreements to safeguard her interests. She was a fascinating woman, and it was fun to hear her story during the tour.
4) Musica Statue – this statue sits at a traffic rotary along Music Row (which is lined with many, many recording studios). Sculpted by Alan LeQuire, it’s 9 nude figures dance in a circle, reaching almost 38′ tall and are cast in bronze (the base is bronze and limestone, should that ever come up in a game of Trivial Pursuit). 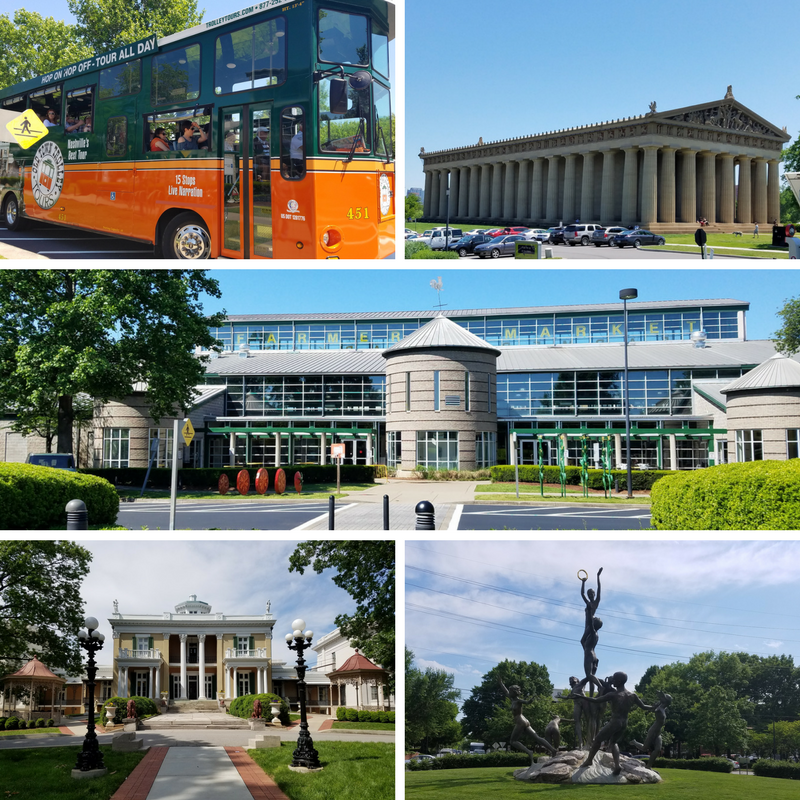 Before and after my tour, I explored a little of Downtown Nashville. It’s an easy area to walk around, there are a lot of touristy spots, and some business-y spots. Of course, I had to stop at GooGoo’s for a sample of their namesake candy! And, be sure to get a BBQ dinner while you’re in Nashville. I had a delicious dinner and delightful time chatting up the bartenders at Martin’s BBQ on 4th Street. 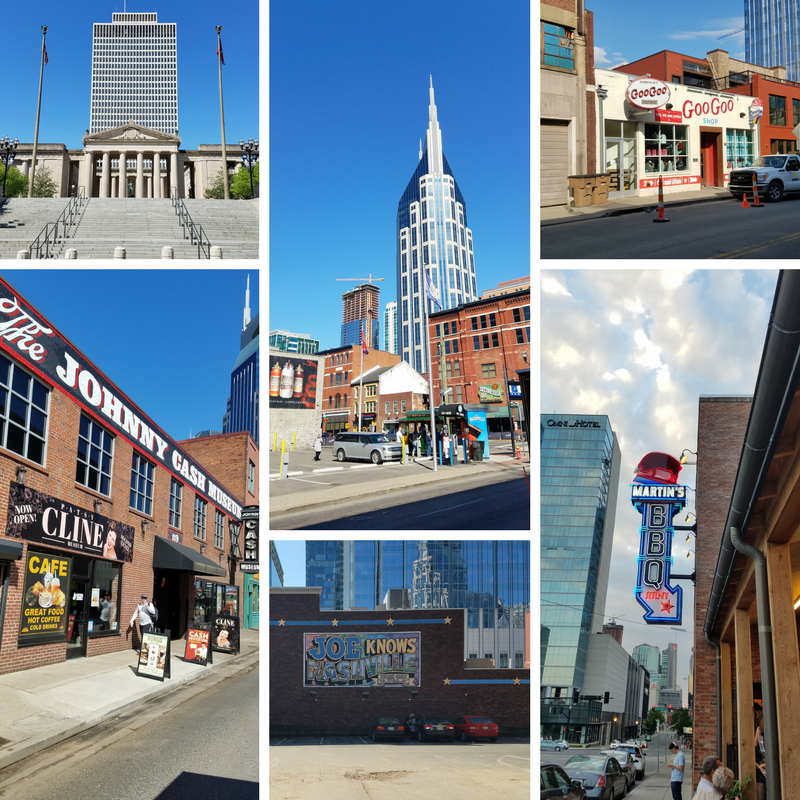 While walking around, I came across the John Seigenthaler Pedestrian Bridge. One of the longest pedestrian bridges in the world at 960′, it spans the Cumberland River and connects downtown Nashville with residential East Nashville. Originally built in 1907-1909, it was closed to automobile traffic in 1998. It’s featured in many country music videos, including Dolly Parton’s 2011 “Together You and I”.
Cost: FREE 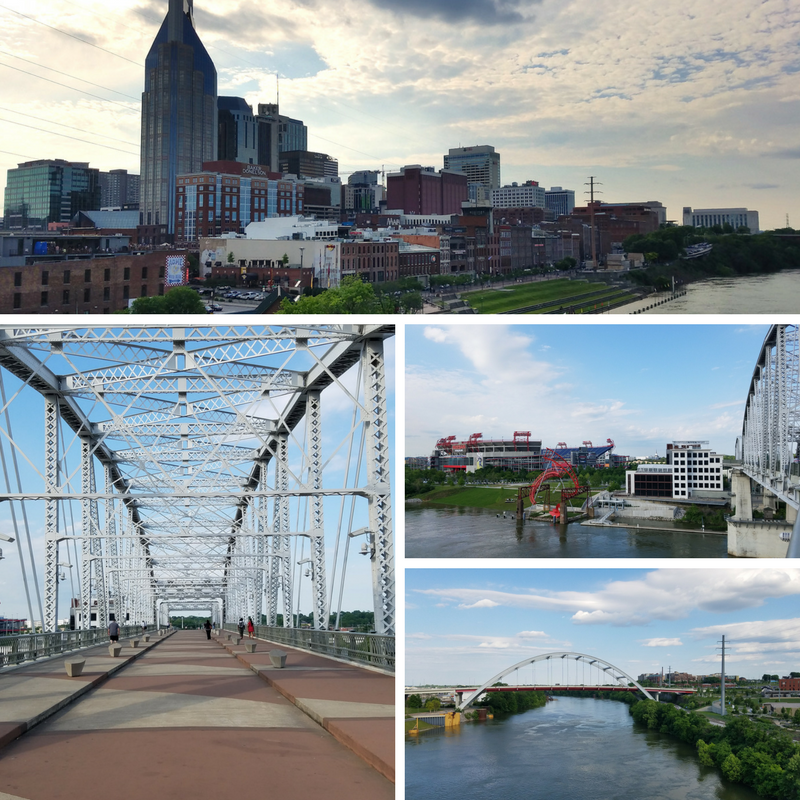 The rest of my time in Nashville was spent tracking down some of it’s many beautiful street murals. Some of my favorites can be found at the House of Blues Studios! Occupying a campus of 8 houses in the Berry Hill neighborhood, they have decorated all the outside walls and fences with an amazing amount of murals. Filled with fun designs and portraits honoring some of the greatest music legends of our time, you can spend a good hour here exploring them all. Although I assume they’re used to people coming around to take pictures, I did make a point of going in the evening off-hours so I wouldn’t bother anyone with my gawking.
Cost: FREE 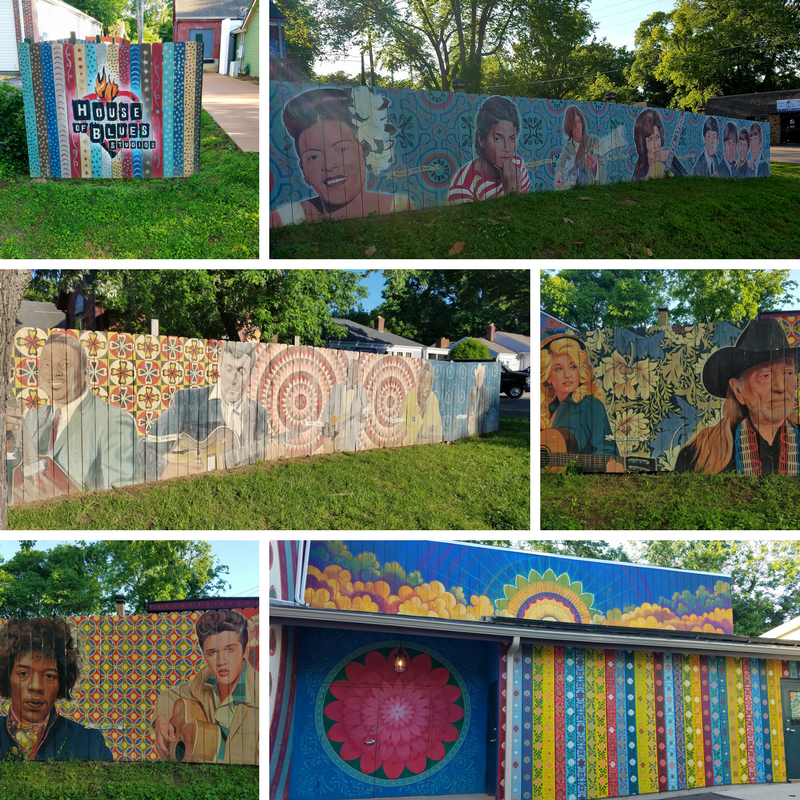 Of course, I can never pass up an opportunity to remind my family of just what an angel I am! Thankfully there were some friendly tourists near this mural by Kelsey Montague, located in The Gulch neighborhood, who took a picture of me to share. I think the details in the wings are amazing!
Cost: FREE 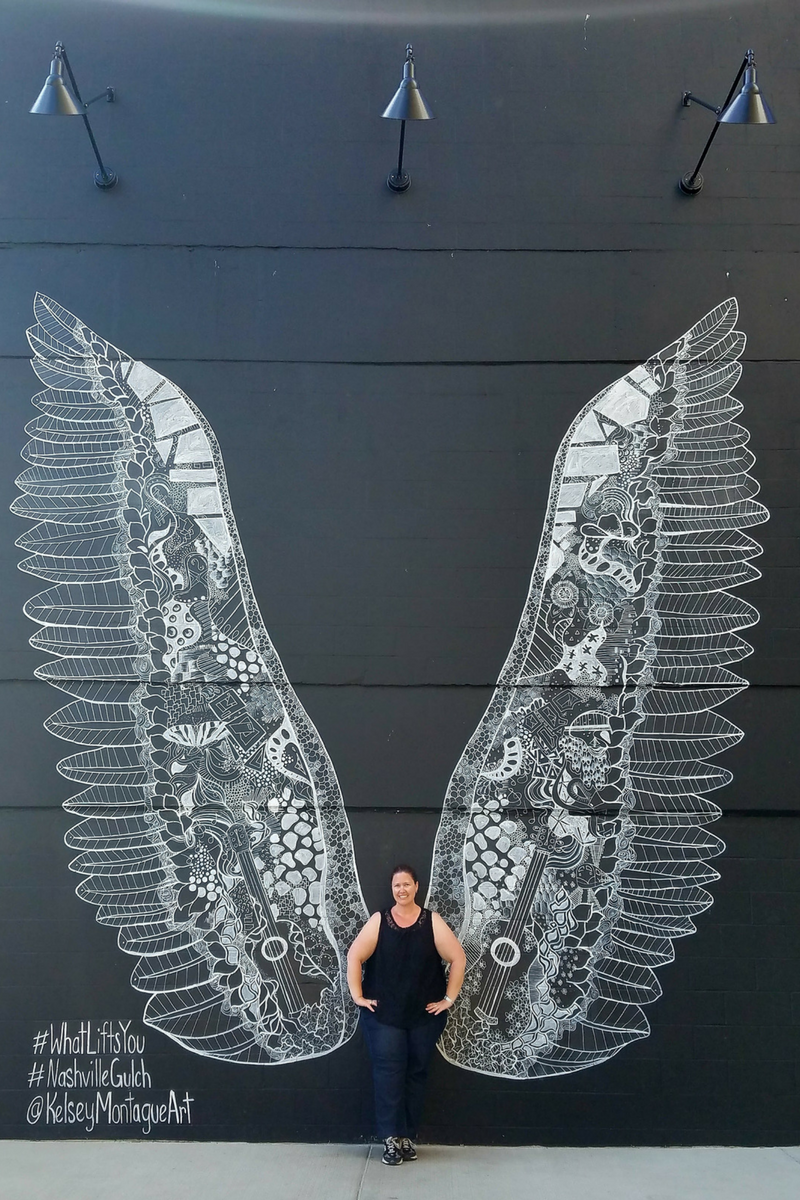 Finally, I explored the 12 South neighborhood. A knowledgeable Lyft driver told me this used to be somewhat of a rough neighborhood and is now one of the hippest & trendiest around! It’s full of shops, restaurants, and street murals on almost every building! It was great fun exploring this area to see what I could find.
Cost: FREE 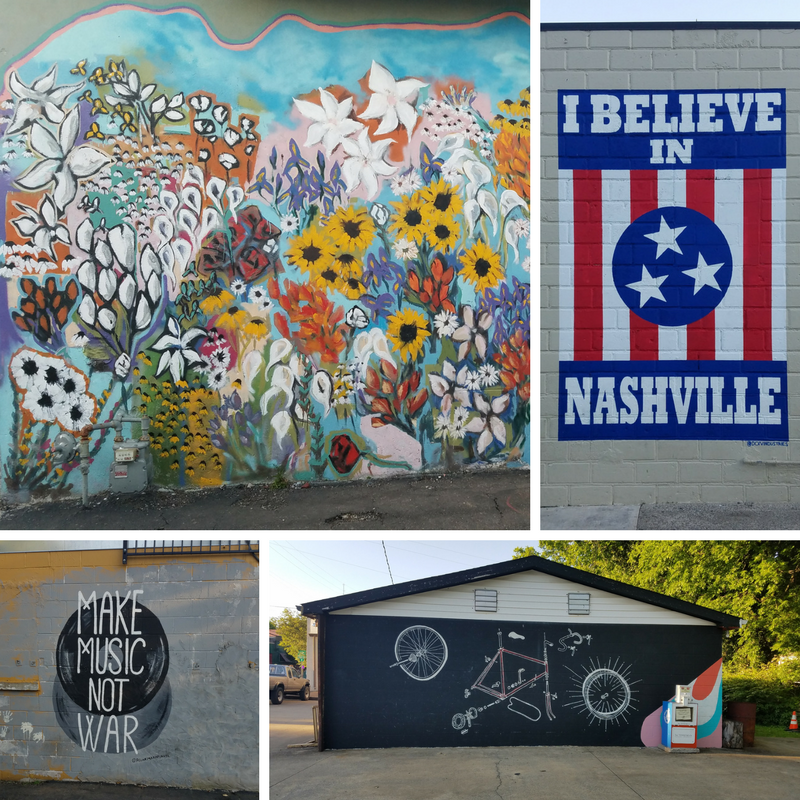 A quick trip, but so much was seen! Here’s my itinerary, plus some other things you can choose to see when you visit: 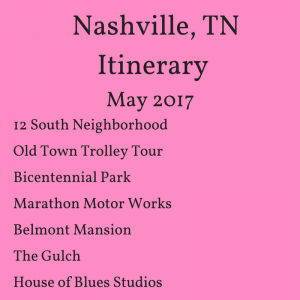 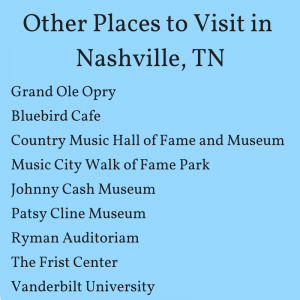 I was just slightly over $200 on this trip – certainly an acceptable margin in my opinion. One advantage I had was getting a ride from a friend who was driving from Memphis to Nashville, and I selected a hotel near the airport. Although it meant taking a Lyft to get to the touristy things, it was more economical than staying downtown, plus I had a free shuttle to the airport for my (very!) early morning flight. 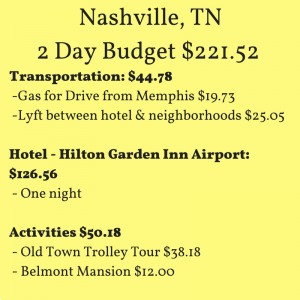 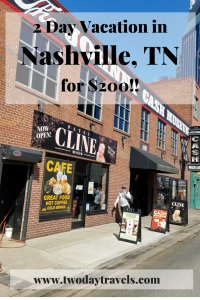 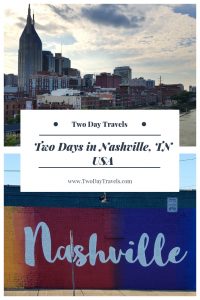